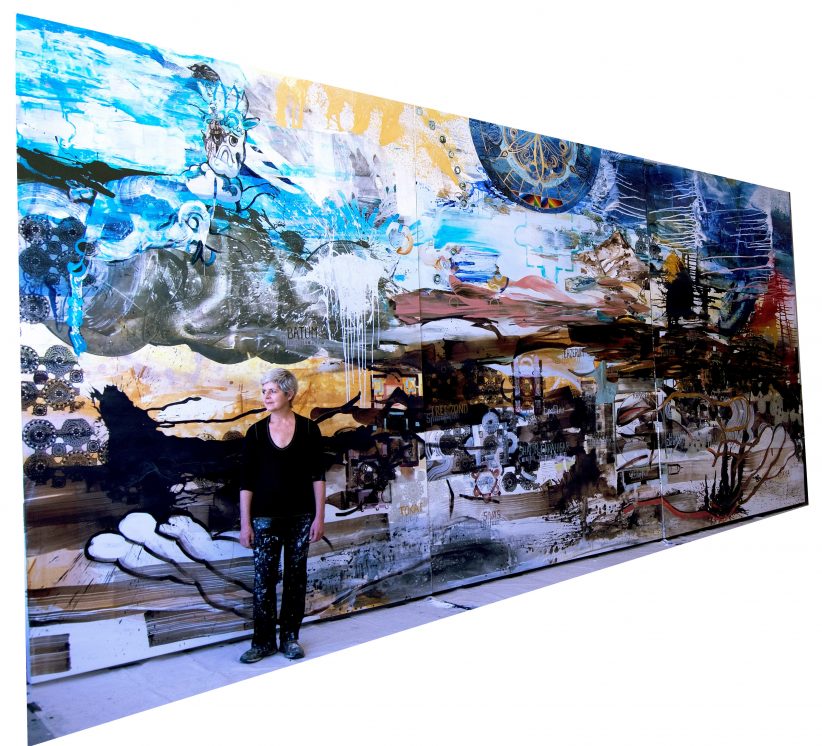 Artist Jackie Kazarian in front of her painting commemorating the centenary of the Armenian Genocide. (Photo by Ruzanna Tantushyan)

Armenian-American painter Jackie Kazarian dedicated her latest art project to the 100th anniversary of the Armenian Genocide. The artist had Pablo Picasso’s Guernica in mind when she started her 4 x 9 meter painting on canvas called “Project 1915” three years ago. Guernica was the Spanish artist’s response to the first aerial bombing of a civilian population for the sole reason of terrorizing them, while the Armenian Genocide was the first major Genocide of the 20th century.

“A lot of people wouldn’t have known about Guernica if Picasso hadn’t painted that painting. So I thought similarly about this painting. But I decided to celebrate the culture that have survived as opposed to a lot of wonderful artists and painters who have depicted some of the terrible things that happened during the Genocide. I decided to make an effort to move forward and present an identity which is about survival and a rich culture,” Jackie Kazarian said in her interview to CivilNet.

The Chicago-based artist is also representing Armenian needle lace in her painting – something that she used to watch her grandmother, a survivor of the Armenian Genocide doing while she was growing up. The needle lace was a connection for Kazarian to the craft and culture. The painting has images of needle lace and also Armenian churches topologies and symbols from illuminated manuscripts and Armenian iconography.

The opening of the painting will take place on April 17 at Mana Contemporary in Chicago and a panel discussion will take place in May. You can watch CivilNet’s full interview with Jackie Kazarian.