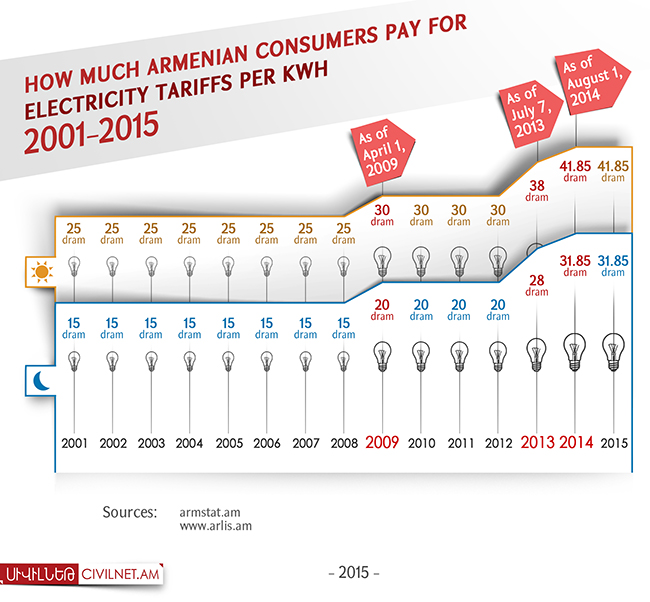 In the early morning hours of June 23, police began dispersing people at the #ElectricYerevan protest.

When Armenia’s Public Services Regulatory Commission unanimously approved increasing electricity tariffs in the country, it set into motion a number of events which has culminated in an ongoing protest dubbed #ElectricYerevan.

Both the authorities and demonstrators have dug in their heels and are playing a waiting game as the protest heads into its 12th day on Baghramyan Avenue — a major thoroughfare in the city where the National Assembly and Presidential Palace are located.

The protest is essentially about a 7 AMD (1.5 US cent) hike in electricity prices in Armenia which is set to take effect August 1, 2015, but at the heart of the movement lies the wider issue of deep mistrust in the government, corruption, mismanagement and injustice.

To understand the Armenian people’s discontent and frustration, it is necessary to take a deeper look into the circumstances that led to this current crisis.

Armenia’s energy sector is almost completely owned and managed by Russian companies. The CJSC Electric Networks of Armenia (ENA) holds an exclusive license to distribute electricity in Armenia. It is wholly owned and operated by the Russian energy holding company, Inter Rao Credit B.V., which is a subsidiary of Inter RAO UES with its headquarters in Moscow.

The utility company serves about 935,000 customers in Armenia, and distributes electricity at tariffs confirmed by the Republic of Armenia’s Public Services Regulatory Commission (PSRC).

On May 8, 2015 the ENA applied to Armenia’s Public Services Regulatory Commission to increase electricity rates by 17 AMD. The electric company had originally proposed that daytime rates for electricity be increased from 41.85 AMD/kWh to 58.93AMD/kWh and nighttime rates from 31.85 AMD/kWh to 48.93AMD/kWh. The Commission did not approve the 17 AMD hike, instead it approved an increase by 7 AMD, which will go into effect on August 1.

The PSRC’s approval of the price hike on June 17 was the fourth of its kind since the company’s establishment. The Commission had already approved three requests for electricity price hikes since 2009, the latest being a price increase of about 10-11 percent or by 3.85 AMD in August 2014.

Yevgeny Bibin, ENA’s Russian general manager, attempted to justify the company’s request and subsequent approval of the price hike by pointing out that the company registered low profits and has accumulated huge debt over the past few years, resulting in overall losses.

In an interview with ArmInfo, Bibin said that increasing electricity prices was the “less-evil solution.” He blamed the Government of Armenia for ignoring the problems brought forward by the ENA over the past few years and for not carrying out impartial market reforms for the sector, which resulted in great losses and the accumulation of huge debts.

Bibin went on to say that problems were not connected with the activity of the company but rather “reduction of power general at big and large Hydro Power Plants, protracted repair of the nuclear power plant, energy imbalance” impacted the ENA’s efficiency over the last three years.“Raising energy prices is the only hope that the power industry will not collapse,” Bibin said.

The ENA released its 2013 financial report conducted by the independent audit company Ernst and Young. The findings show that the ENA’s losses have amounted to 44,470,000,000 AMD (approximately $94 million), and the report concludes that ENA is on the brink of bankruptcy.

A report published by the World Bank in 2013, concludes that the power sector in Armenia has been hurt financially over the past few years, and the rising tariffs are not sufficient to cover the increasing costs. The report also states that large investments are needed to improve the sector, which will significantly increase revenue requirements, so an increase in tariffs is inevitable.

The findings of Ernst and Young and the World Bank seem to show that ENA is indeed suffering huge losses, and the logical solution is to increase tariffs. However, there remains to be widespread skepticism about the underlying causes which resulted in these losses.

After looking further into publications by international organizations, investigative journalists, and reports published by the RAO UES itself, corruption and mismanagement within ENA become evident.

A report published by the anti-corruption watchdog Transparency International Armenia claims that since 2011, the ENA has included a budgetary expense to the tune of 450 million AMD ($952,078) for luxury car rental fees, while the company is already at a $250 million loss. This has contributed to the ENA’s government-endorsed demand for increasing electricity rates for Armenian consumers.

“While renting the cars, ENA paid for car washing, operation, fuel and insurance, and all the expenses that are included in the bid [that was] submitted to Public Services Regulatory Commission (PSRC) to raise the current tariff for electricity by 17 AMD,” the report states.

Another finding that puts the ENA’s low profitability claim into question is the report published by RAO UES itself, which shows a clear increase in the Russian company’s revenue from Armenia to $104 million for the first quarter of 2015, compared to $60 million in the first quarter of 2014. The report states that the company’s earnings from Armenia before interests, depreciation, taxes, and other adjustments has risen from $2.23 million to about $12.3 million during that period.

Deputy Minister of Energy Areg Galstyan recently said that Armenia’s Metsamor Nuclear Power Plant, which covers about 40 percent of the country’s electricity generation sells power to ENA for 5.73 AMD per kWh, while ENA sells it to the public for 41.85 AMD per kWh.

Moreover, reports show that ENA’s Russian managers have been paying, on average, about 20 percent above market price for equipment, electrical cables and other materials that they have purchased since 2013. These purchases have usually been made from Russian suppliers, or Armenian firms with close ties to the Armenian government. According to RFE/RL investigation, ENA has paid above market price for equipment and other materials.

When the PSRC unanimously approved the electricity rate hike, it sparked nationwide protests.

The day the decision was made public, June 17, a group of youth activists from the ARF-Dashnaktsutyun gathered in front of the PSRC’s headquarters to protest the decision. Clashes erupted with the police, and several activists were arrested and released hours later.

Demonstrators at the #ElectricYerevan protest shut down Baghramyan Avenue.

On June 19, thousands of Armenian citizens gathered in Yerevan’s Liberty Square to continue protesting the electricity price hike. The protesters described themselves as “concerned citizens,” who were not affiliated to any political party or NGO. They announced that if their demands were not met in three days, they would take the protests to Baghramyan Avenue where the Presidential Palace is located.

At 19:00 on Monday June 22, after their requests were not met, thousands of protesters, many of them young people, began marching toward Baghramyan Avenue where they were met with riot police blocking the way to the Presidential Palace. Yerevan’s deputy police chief Valeri Osipyan warned the protesters that their march was illegal and threatened to use force if they did not turn back.

In the early morning hours of June 23, at approximately 5:30am, riot police began moving towards the crowd, using water cannons against the peaceful protesters. Police officers dressed in civilian clothing used batons to drag people away from the scene and arrested hundreds of people. It is estimated that at least 25 people were taken to the hospital as a result of the violence, and 237 people were arrested -an unprecedented number in Yerevan. Journalists were also targeted and many of them had their equipment confiscated or damaged. Other reporters were detained by the police.

That same evening, an estimated 15,000 people gathered on Baghramyan Avenue. A makeshift barricade was installed using garbage bins to separate the protesters from the police blockade.

The peaceful sit-in on Baghramyan Avenue has been in place since June 22, with a few hundred protesters during the day and several thousands joining in the evening. Some protesters came with their musical instruments to sing and dance traditional Armenian songs, others played chess, football, and volleyball.

The protest became more and more organized, with several booths set up to provide protesters with food, water and first-aid.

The protesters have three major demands: to review and annul the commission’s decision to increase electricity tariffs. To review the current rate, and to punish the police officers who were involved in the violence against peaceful protesters on Baghramyan Avenue on the morning of June 23, along with those who gave the illegal order to carry out this violence.

A Way Out of the Impasse? 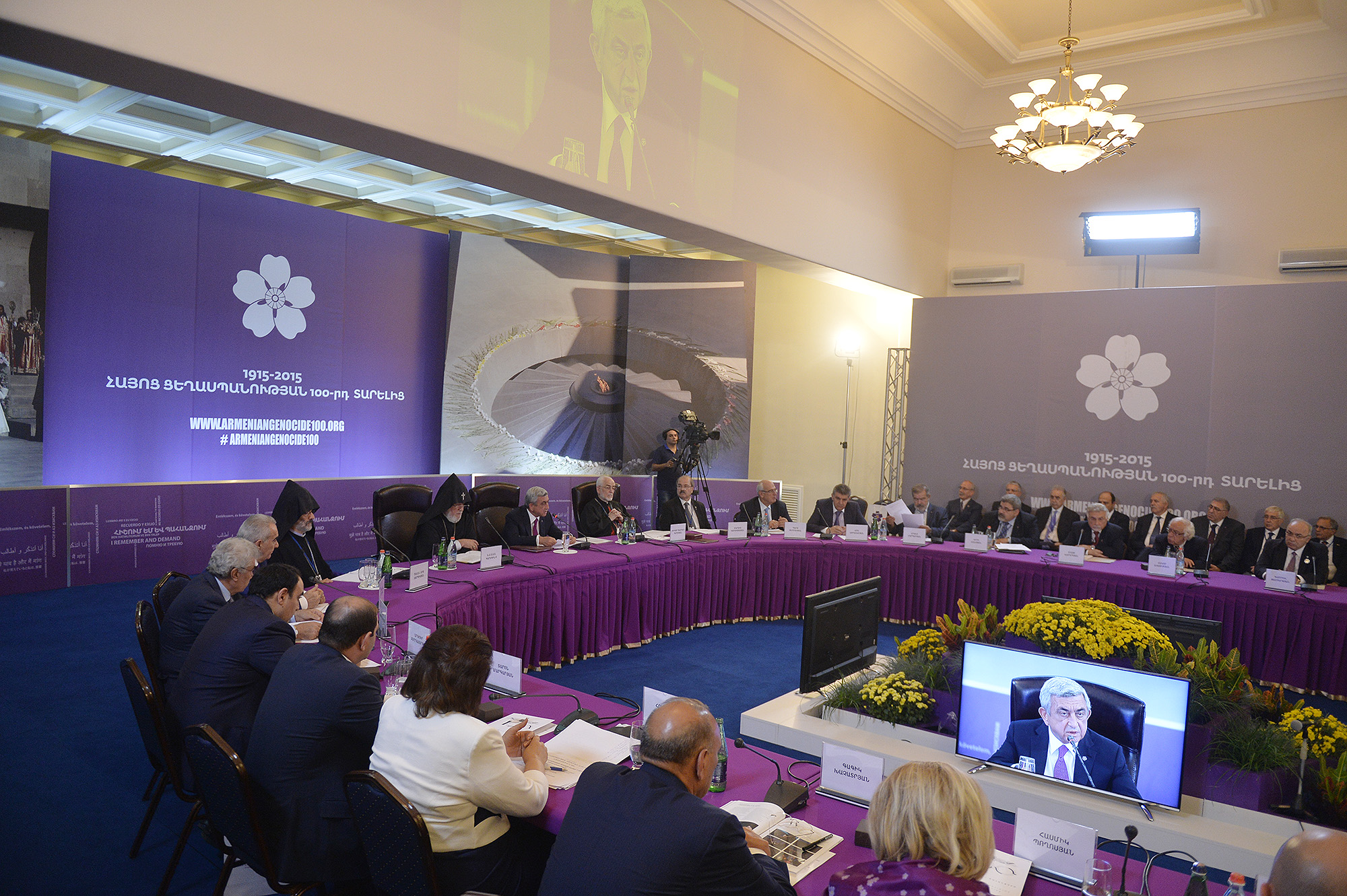 President Serzh Sargsyan meeting with his economic advisers on June 27.

In order to find a resolution to the impasse, as protesters in Yerevan continued to block Baghramyan Avenue,  a major thoroughfare in the capital, in protest of the rate hike, President Serzh Sargsyan on June 27, met with his economic advisors.

According to a statement released by the President’s office later that day, Sargsyan proposed that an internationally renowned consulting company be commissioned to conduct an audit of ENA. He also proposed that if necessary, the organizers of the movement would be included to discuss whether the price hike is justified, and what threat would it present to Armenia’s energy system if the prices are not increased.

Lastly, to save-face with his Russian counterparts, Sargsyan stated that “until the auditing company can summarize its findings, the government will bear the full cost of the rate hike.” According to Sargsyan, the funds will come from “means envisaged for security measures,” and not from ongoing programs or social benefits.

In other words, the people will keep paying for this price hike out of their [other] pocket.

The public refused the President’s proposal, because their demands of annulling the decision to increase electricity tariffs was not met, and so the protests continued on Baghramyan Avenue.

“The President’s statement was an attempt to mislead the public,” one of the protesters told CivilNet. “The authorities are trying to stall for time. The people should double and triple their efforts and continue protesting.”

In more recent news, on June 29, Prime Minister Hovik Abrahamyan said that the subsidies promised by the President for the rate increase would not come from the state budget. Amid mounting questions as to where it would come from, Abrahamyan the following day announced, “It is unclear what measures the government will take to compensate the electricity tariffs increase.” He then added, “The public will be informed as soon as a decision is made.”

Increasing the electricity tariffs also has an impact on the country’s economy. Earlier in June, the Media Center held a discussion on the economic consequences of the electricity price hike in Armenia.

“In 2014, when the electricity tariff increased by 11 percentage points, it led to an inflation of about 0.4%. In this case, we have a 16% price increase, which will lead to a further inflation of around 1%. As a result, we will have a total annual inflation of 5.5%,” said Hayk Gevorgyan, an economic analyst at Haykakan Zhamanak daily.

Gevorgyan added that the price hike will affect consumption. “Each family in the country allocates some amount of money for purchases, and now every year about 40-50 thousand drams of this sum will be cut and spent on paying for electricity,” he said.

The Electric Yerevan protest, now entering its 12th day, seems to have changed the narrative in the country and appears to have widespread popular support among Armenians from all social and economic backgrounds.

The Armenian people seem to have a clear demand: to annul the decision of raising electricity tariffs – but it goes beyond the rate hike. It’s about accountability, justice, and at the end of the day, the right to live a dignified life. Tens of thousands of people have been on Baghramyan Avenue for the past week. They have been there despite the crushing heat, despite police brutality, and despite threats of violence. They came together to form what has been one of the clearest demonstrations of the potency and unity of the local population for a single non-partisan cause. Today, 12 days later, the citizens of Armenia are still standing firm on their grounds, singing, dancing and chanting “we are the owners of our country.”