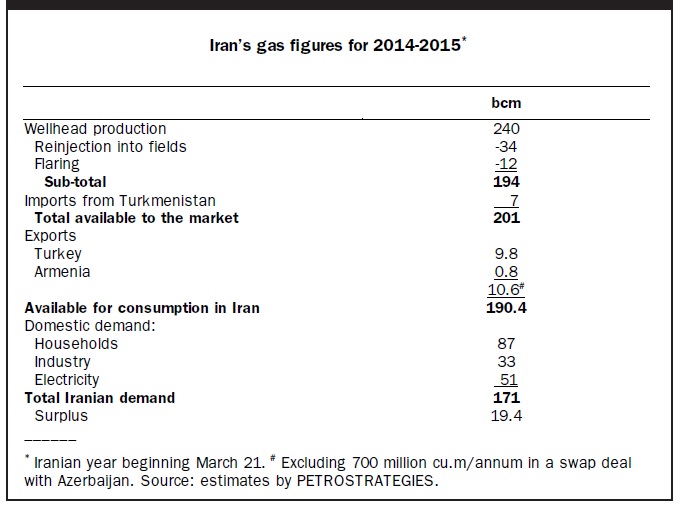 The World Energy Weekly (Volume 30, July 27, 2015), published by the Paris-based Petrostrategies consulting firm which carries out strategic and economic research and analysis on the energy industry, reports that the lifting of international sanctions against Iran opens new possibilities for exporting Iranian natural gas to outside markets.

The lifting of the international sanctions against Iran, which is scheduled for the beginning of 2016, comes at just the right time for the country’s gas industry. Iran very recently regained a surplus gas balance in 2014- 15, while for several years it was barely capable of covering its own needs and was even a net importer. On the basis of the data gathered by PETROSTRATEGIES, one can see that in 2014-15, Iran generated a production surplus of around 19.4 bcm. Five new development phases of the giant South Pars field will add 180 million cu.m/d (around 65 bcm/annum) to its production by September-October 2015, and will raise it to around 260 bcm. Tehran could therefore consider boosting its exports, which up to now were limited to sales to Turkey and Armenia and a small swap deal with Azerbaijan. In a few weeks, Iraq will start receiving Iranian gas, at the initial rate of 2 bcm/annum. In two years time, when the IGAT 6 gasline (currently under construction) is completed, Iran will be able to supply 9 bcm/annum to Iraq. But, in the medium term, it could also gain a foothold on the international LNG market if an FLNG project currently being considered with Shell takes shape.

Shell owes an outstanding debt of $2.3 billion to Iran. The company’s CEO, Ben van Beuren, went to Tehran in June 2015. At the beginning of July, Iranian sources said talks were being held for a project with the operator of the “biggest floating LNG terminal in the world”. This can be none other than Shell, the designer of the FLNG Prelude, which it hopes to put into service in 2017. With a capacity of 3.6 million tons/annum (4.7 bcm/annum) of LNG (plus 1.3 million tons/annum of condensate and 0.4 million tons/annum of LPG), the Prelude concept corresponds well with the characteristics of the gas from South Pars, which is rich in liquids. Shell wants to duplicate the Prelude concept elsewhere in the world. It remains to be seen how much lower the construction cost of the “copies” will be than that of the original prototype: $11 to $12 billion. The Iranian Gas Export Company (IGEC) will be its partner in Iran.

Another LNG project, this time onshore, could be completed quite quickly in Iran by IGEC. This is Iran LNG, in Tombak, near the large gas and petrochemicals complexes of Assaluyeh, which is the landing point for the gaslines running from the South Pars offshore field. This is one of the six LNG projects that Iran launched in the 2000s and the only one that made any headway, before in turn being halted, because of the sanctions. The construction of the Tombak LNG complex began in 2007 and was expected to finish in 2011. In order to avoid the US sanctions already in force, Iran had opted for liquefaction technology developed by the German company Linde, although the only large plant in the world that uses this technology, i.e. Snohvit, in Norway, is often hampered by technical breakdowns. But the implementation of sanctions against Iran by the EU too, in January 2012, led to the halt in the construction work at Tombak. Only five days after the signing of the Iranian nuclear program agreement of July 14, 2015, which is to lead to a lifting of sanctions, the German Vice Chancellor, Sigmar Gabriel, traveled to Tehran, at the head of a 60-member industrial delegation that notably included Linde and Siemens. The plant being planned by IGEC is to have two liquefaction trains, each with a capacity of 5.4 bcm/annum. A later phase could possibly add a further two trains. Linde reportedly told the Iranians that it was available to resume work at Tombak. Should the sanctions be lifted, it is possible that phase 1 of this plant will start service in 2018. Siemens and Linde also proposed to build small liquefaction units (40,000 to 400,000 tons/annum) within Iran, for peak shaving.

For Iran, there are many possibilities for rapidly boosting its piped gas exports. One of the first projects to be carried out could be the one that aims to supply Iranian gas to Pakistan. This project was hindered by both the US sanctions against Iran and the difficulties Pakistan was facing in financing its share of the construction work. By the terms of an agreement signed in September 2012, Pakistan was supposed to start receiving Iranian gas at the end of 2014. A $1-million per day penalty fee for delays was applicable if Islamabad failed to meet this deadline. But Pakistan argued that a political “force majeure” prevented it from fulfilling the contract. For its part, Iran, which had already built 90 km of the gasline that is to connect Assaluyeh to the Pakistani border, has been waiting for the situation to improve, in the hope that it will not lose its contract with Pakistan. It seems that the situation is indeed now improving. But in recent years, Pakistan has modified the configuration of the project on its territory. Islamabad has set up a huge $46-billion project with China for the construction of an Economic Corridor running from its port of Gwadar, on the Indian Ocean, to the town of Kashgar, in Xinjiang, in the North-West of China. More than fifty contracts, protocols and MOUs were signed for the project during Chinese President Xi Jingping’s visit to Islamabad, on April 15. The project includes plans to construct an LNG import terminal in Gwadar, as well as infrastructure enabling it to receive large methane carriers and oil tankers there (>200,000 dwt), a gasline and oil pipeline, power plants, a refinery, an airport, highways and railroads etc. Thanks to this Corridor, China is hoping to reduce its dependence on the Strait of Malacca. It is expected to generate savings in transportation costs and is to diversify the geopolitical risks involved.

The facilities that are being planned at Gwadar are to be located only 80 kilometers from the Iranian border. Pakistan’s Minister of Petroleum recently stated that his country would need only six months to lay a gasline and start importing Iranian gas. But in order to do this, the Iranians would have to revise the planned route for the last section of their gasline and direct it towards the south, in order to link up with Gwadar. China is expected to cover 75 to 80% of the investments expected for the Economic Corridor. The por t of Gwadar was given to the Chinese as a concession at the beginning of 2013. The construction of the LNG receiving terminal is expected to begin there in October 2015 and the regasification terminal is slated for service star t-up 30 months later. It is possible that, in a later phase, the Iranian gas entering Pakistan will pass through China, following the route of the Economic Corridor. For its part, India could be interested in importing Iranian gas via Pakistan. The Iran-Pakistan contract incorporates plans to supply 9 to 11 bcm/annum of natural gas at plateau. Exports could begin in 2017.

Europe is one possible destination for the Iranian gas, but not in the short term. It is likely that no Iranian gas will reach Europe by land in the next decade at least. Until then, Iran could serve markets closer to home, starting with Oman. This sultanate played an effective go-between role during the talks that led to the official opening of the nuclear negotiations between Iran and the US. Its gas needs are rising, while it must also fulfill LNG export contracts. Oman currently imports 2 bcm/annum of gas from Qatar, via the Dolphin gasline, which runs through the UAE. Its output stands at around 30 bcm/annum and it exports around 10 bcm/annum of LNG. In June 2015, Tehran assigned a consultant with a feasibility study on gas exports to Oman. The idea is to build a 260-kilometer gasline via the Strait of Hormuz, up to Oman’s industrial zone of Sohar. A volume of 7 to 10 bcm/annum has been mentioned. It remains to be seen if Oman will still need to import gas when BP starts to produce some 10 bcm/annum in 2018, from the tight structures that it was awarded by Muscat. Iran could export gas to the UAE too, which is also short of gas, provided that it settles its dispute with the Emirate group Crescent, to which it has failed to deliver the contracted gas. A recent arbitration ruling was made in favor of Crescent, but the lawsuit has not yet been terminated.

Iran puts the investment needs of its gas sector at $100 billion. Half of this sum is to be provided by foreign firms. Tehran is planning to award the latter with contracts for the development of 27 gasfields, as well as the construction of LNG plants. A number of companies, which were in talks with Iran over LNG projects (Total, ONGC, OMV, etc), halted the negotiations, as a result of the sanctions. They are waiting for Iran to reveal its intentions and disclose the contractual terms that it will offer them, in order to determine whether or not they can do business in this field.

Iran produced 194 bcm (after reinjection and flaring) of commercial gas in 2014- 15. Its 6th five-year program incorporates plans to produce 365 bcm/annum of gas in 2020. Iran believes it will then be able to export around 75 bcm/annum of gas. Its consumption has increased in recent years at the rate of 5 to 10 bcm/annum and it hit 170 bcm in 2014-15. Gas accounts for 65% of Iran’s primary energy consumption. Gas consumption growth is supported by very low sales tariffs on the local market. The government is trying to gradually bring these tariffs in line with the average export price for Iran gas, but Parliament is stalling.

The Iran Gas Engineering and Development Company (IGEDC) has assigned its fellow Iranian firm Pasargad Energy Development Company (PEDC) with completing the construction of the IGAT-6 gasline (to the Iraqi border). This will involve extending the length of this infrastructure (590 kilometers more) and adding five compressor stations. This will make it possible to boost supplies to Iraq and better serve Western Iran. IGAT-6 also aims to prepare the way for possible gas exports to Europe. The total cost of this project is put at an estimated $2.2 billion. Iran is planning to expor t 2 bcm/annum of gas to Iraq (in a first phase), before boosting this to 9 bcm/annum thereafter, by the terms of a 25-year contract. This gas is earmarked for power plants in Eastern Iraq and near Baghdad. Exports of Iranian gas to the region of Basrah are also being considered. This will require the laying of an ad-hoc gasline.