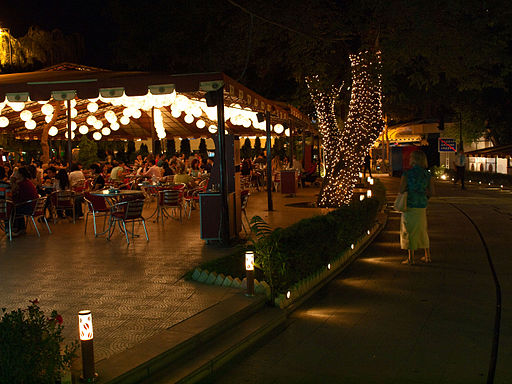 We all live in bubbles, don’t we? No matter who we are, where we are, we have our own circle of friends, family, community, work or school, maybe a club of this or an association of that. We create an immediate society around us, which forms part of society taken more broadly. I guess problems arise when the immediate circle becomes impervious – a more rigid, opaque bubble, divorced from broader society.

Living in Yerevan, I am very conscious of the bubble in which I find myself. It is often Diasporan, English-speaking, shared with people with disposable income. Not exclusively so, but more often than not that is the case. Spending free time in cafés and shopping malls, it is not hard to pretend to be in some other part of the world. Even though I find this to be expected – and, in fact, I am happy to note this kind of development in the country – I also find it bothersome to sense that I am at a remove from broader society in Armenia.

On the one hand, I want to reach out to broader society in Armenia and be a part of it. On the other hand, I often feel that not only am I not a part of broader society in Armenia, I cannot be so, whether it is because (a) there is some inherent, inexplicable obstacle for me to be so, or (b) I am fooling myself and in truth do not myself want to be so deep down, for whatever reason, or (c) broader society in Armenia rejects me. I strongly suspect that the reality is between (a) and (b). It is very rare that I come across (c) in Armenia; however, to be fair, that is not what I have heard from others who live in Yerevan, whether non-Armenians or Diasporans.

This broader society of Armenia, I would say, displays some diversity. Let us presume, though, for the sake of argument, that there is one single broader society in Armenia with discernible characteristics. Actually, I would argue that there is at least a dominant culture in Armenia and that it is identifiable with presumptions and clear paths of thinking, mostly tending towards patriarchal and conservative outlooks. The phrase “the Armenian mentality” is often invoked in the country in reference to that phenomenon.

I try not to judge. Not everybody is like that, though. Recently I had occasion to feel upset when a friend of mine – a Diasporan who visits Armenia regularly for lengthy stays – began to go on and on about negative aspects of society in Armenia. Specifically, he pointed out how the people have corrupt values, how they find it necessary to be dishonest, how power is placed far above integrity, and how those sorts of attitudes play out at all levels: in politics, in business, in inter-personal relations. He told me a story of family friends, likewise Diasporans, who for years had trusted a local Armenian family. Time came for some business and, of course, as the story went, that local family completely ripped them off, etc., etc. It’s not only the sort of story I have heard too many times, but I can even say that my own family could relate to it.

The generalisation really bothers me, however. Don’t I have completely trustworthy local Armenian friends, who have continuously demonstrated sincerity in both personal and professional lives? Conversely, aren’t there plenty of Diasporan criminals or thieves in the Armenian world, not to mention immoral non-Armenians wherever Diasporans live? I think my friend would agree, but he would argue that broader society in Armenia as a whole maintains those negative values, that I am speaking of individual cases while his observation is more general. Probably there would be an account of the influence of the Soviet years in there as well, as an additional argument. The converse argument would be that many Diasporans (classical Ottoman-descended ones or Armenians from Iran) have for one or two generations now found themselves in societies that place heavy emphasis – again, taken very generally – on typical liberal Western values, with expectations of rule of law, respect for human rights, the condemnation of violence, and so on.

I’d like to see formal, statistical studies about society in Armenia when it comes to such things. I’d like to see the values shared by most people who live in Armenia accounted for as far as reasonably possible. Such studies do exist, but even when looking at them I have doubts about methodology and interpretation. I’d really like to know if a vast majority of residents of the Republic of Armenia hold it to be true, for example, that “the ends justify the means” or “might makes right” or other cynical aphorisms that are often heard in the country in public and private. I have more than once heard Hitler and Stalin invoked as great, powerful leaders, men of immeasurable influence. What the influence was used for is not really a consideration. Given the historical memory of the genocide and the ongoing conflict over Artsakh, such sentiments might indeed, understandably so, have widespread popularity. And perhaps not just among the Armenians of Armenia.

It becomes a different matter, though, when “might makes right” is applied to elections and their results, when “the ends justify the means” is the backdrop of court cases and their judgements. Those who cherish liberal Western values find it difficult to accommodate that reality and to be accommodated in it. That’s where a real, immediate clash may occur.

Very often, then, when Diasporans end up in Armenia, they have to face this kind of clash of expectations. In the past, not finding peanut butter in the stores or being stared at for wearing shorts or jeans was something Diasporans had to think about in Yerevan. Not so much anymore. But the palpable clash of values, which might have gone unnoticed or seemed secondary earlier, becomes more and more apparent as one lives and works in Armenia.

Many Armenians from the Western world could find it understandable, for example, that homosexuality is a taboo subject in Armenia. That’s not surprising for what one would call a conservative society. But there are also frequently calls for violence against homosexuals. It’s a rather high level of intolerance, openly expressed. At the end of the day, the account is a simple one of a society that does not value openness about sexuality. The premises do not match liberal Western values. And so there cannot really be any meaningful debate about it.

Now, I work in the field of education, and I had the great opportunity to attend a debating event recently that brought together young Armenians of Armenia with a more liberal education going against students from a military academy. It was truly a wonderful, proper debate conducted at a high intellectual level. That gave me great hope that nuanced discourse can have its place in public life in Armenia. But I found myself rather conflicted and even worried when I listened carefully to what the sides had to say. I believe I came across something more sinister than a clash of values: a clash of basic information, of facts. The military students cited at least two things that, as far as I knew, were simply, factually incorrect.

My fear is that these military students were purposefully made to believe the wrong thing. It would worry me deeply that current and future members of the Armed Forces of the Republic of Armenia are being brainwashed, that they are not being allowed to exercise critical thinking. Valuing critical thinking is, of course, a classic liberal Western approach that I would like to see in Armenia. But I would like to see it in Armenia because I find that it is inherently valuable, not because it is liberal or Western. Or have I been brainwashed all this while too about what I value and what knowledge I possess?

I hate myself when my thoughts go in such directions. I especially hate the holier-than-thou, overly judgemental Diasporans who visit or live in Armenia. They always know what’s best and consider it their duty to pass on pearls of wisdom to the poor, benighted locals. I have witnessed that stereotype and I hate embodying it. But sometimes I have to face those generalisations about society in Armenia that I deny and find that I turn into a stereotype myself. I call it “Diasporan Neo-Orientalism”. I do hate it. I do not want to turn into a colonial resident of Armenia, like some white European in Africa a hundred years ago. It’s not fair.

Is my bubble unfair, then? I like my bubble, but I am worried about just how sincere a life I lead, whatever that might mean. Or perhaps I am concerned about the sustainability of my bubble. I am very blessed to have a fulfilling job that pays well, and so I can pretend to my heart’s content in all the cafés and shopping malls of Yerevan that either I am not in Yerevan or that Yerevan is something it is mostly not. That might indeed be an insincere attitude towards life.

But then, the more I think about it, the more I realise that I have always had some sort of bubble around me wherever I have been. I have lived, studied, and worked in four countries, and in none of them have I felt myself part of broader society. I think a major reason for that is bearing the Armenian identity – it sets one apart always, everywhere. The expectation, then, must have been that I wouldn’t have an Armenian bubble in Armenia, of all places. But a bubble does exist for me here. It is not an Armenian bubble, but something surrounds me all the same.

I suppose I wish I didn’t have such a bubble, didn’t create it for myself. But then that would for its part be insincere, perhaps even more so than the opposite case. What is more, if the Armenians are truly a nation and not just some mere tribe or a people, if there is a full-fledged society in the Republic of Armenia as opposed to “the Armenian community of XYZ”, then diversity is to be expected and bubbles of cultures and sub-cultures, communities and clubs, all of these things would only be natural – not just for me or for Diasporans, I mean, but for anyone who lives and works in Armenia.

At the end of the day, what bothers me most is that I cannot ignore the gulf in certain expectations that hangs in the air while living and working in Armenia. In every diverse nation there are going to be mismatches in perceptions, there will be differing worldviews among members of any group of people. But society in the Republic of Armenia is not as diverse as all that. I think that’s the key difference, ultimately. There is minimal ethno-national, linguistic, or religious diversity; that’s simply the case. Diversity of opinion, of sub-cultures, of education – these too, it seems, are limited. To be more accurate, whatever diversity Armenia has is not expressed as powerfully, as accessibly as I have experienced in other places. One has to seek it out and make the effort of creating that diverse bubble, if one wants it. And that forms part of the challenge for those who come from places with diverse populations – places that are far more accustomed to typical liberal Western values – to live and work in Armenia.

Nareg Seferian received his education in India, Armenia, the United States, and Austria.His writings can be read at naregseferian.com.