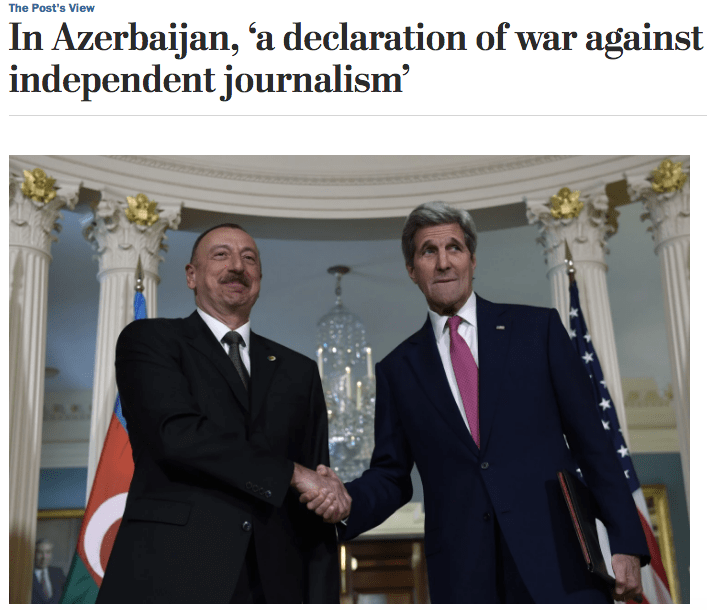 On April 25, The Washington Post editorial board published an article highlighting the tactics used by Azerbaijani authorities to silence independent media.

Read the article below.

In Azerbaijan, ‘a declaration of war against independent journalism’

BEFORE HIS recent visit to the United States, President Ilham Aliyev of Azerbaijan pardoned some 148 inmates, among them some journalists and political prisoners. Leyla and Arif Yunus, human rights stalwarts who were both wrongly imprisoned by the regime, were permitted at last to leave Azerbaijan. In Washington, Mr. Aliyev met with Secretary of State John F. Kerry and Vice President Biden. But no one should conclude that this brutish leader has changed his ways.

On April 21, after Mr. Aliyev returned home, Meydan TV, an independent digital news platform that has brought straightforward and revelatory accounts to a growing audience inside Azerbaijan, announced that prosecutors there opened a criminal investigation for alleged illegal business activities, abuse of power and tax evasion. These are the standard charges used to harass and silence Mr. Aliyev’s critics. Meydan TV reported on its website that the investigation has named 15 of its journalists. None is yet formally charged, but some have been told they cannot leave the country, and they are subject to home searches and equipment confiscations without a warrant. “We consider this as a declaration of war against independent journalism in Azerbaijan,” Emin Milli, Meydan TV’s founder, who had served 16 months in prison on trumped-up charges, told EurasiaNet.org.

Mr. Aliyev is always jittery in the face of criticism. He jailed the journalistKhadija Ismayilova, who first exposed the ownership of lucrative gold mines by Mr. Aliyev’s daughters, later revealed in the Panama Papers to be even larger than thought. Ten other journalists, bloggers and activists also remain imprisoned. Ms. Ismayilova’s plight and that of others have been thoroughly documented by Meydan TV, which does not shy from stories that unsettle the regime. Most recently it challenged the official count of casualties suffered by Azerbaijan in a four-day conflict with Armenia. Using citizen journalists and interviews with the families of servicemen, Meydan TV calculated that the government had underreported the casualties by a factor of three. Meydan TVclosed its newsroom in Baku in 2014 and moved the operation to Berlin after Mr. Milli was repeatedly harassed. Using reporters and contributors in Azerbaijan, Meydan TV reaches its audience by Facebook , YouTube and awebsite.

The experience of Meydan TV teaches that the digital byways can enable free information to reach closed societies and bypass tyrants. Mr. Aliyev seems to think he can fight back with secret police and prosecutors. Perhaps Mr. Aliyev inherited these inclinations from his father, Heydar, a career KGB man who was appointed to the Soviet Politburo. While KGB methods can be painful for those targeted, they can’t seal out the truth, nor stop criticism, as Meydan TV and Ms. Ismayilova have courageously demonstrated. Mr. Aliyev should free all political prisoners, drop the prosecution of Meydan TV and sit down to watch the channel himself. He might learn something about the values a nation needs to succeed in the modern age.