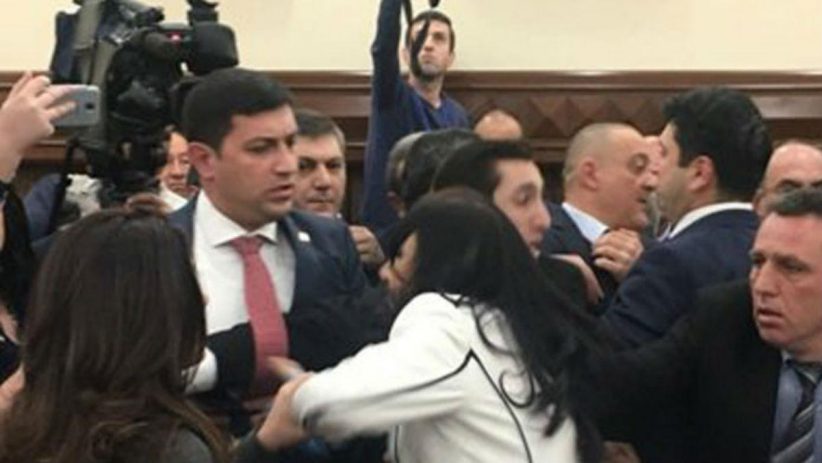 By Bradley Jardine, the article was originally published on Eurasianet.org

A brawl broke out when opposition figures tried to present bottles of raw sewage to city officials.

The brawl ensued after two female representatives of the Yerkir Tsirani party brought bottles of sewage to the front of the hall as a “gift” for the mayor. The putrid liquid was brought from the city’s Nubarashen district, which has seen protests this week as a result of issues with the sewage system.

“The people [of Nubarashen] have to smell this, and you should too,” one of them said.

Soon after, the two party members – Marine Khachatryan and Sona Agekyan – got into an altercation with members of the country’s ruling Republican Party of Armenia (RPA). Khachatryan claims to have received head injuries.

At the beginning of the week, city residents blocked a road leading to the Nubarashen Prison, complaining about unsanitary conditions in the area. The sewage at the prison has been creating unsanitary conditions, with reports of it overflowing onto the streets. The unorthodox demonstration aimed at bringing the issue to the government’s attention.

“Nubarashen is also home to the largest unsanitary dumpsite in the country – an issue often discussed, but never addressed,” the news site The Armenian Weekly said in its report on the incident.

In a video of the brawl, the mayor can be heard calling for police to remove the women, while onlookers worry as to whether the bottles contain sulfuric acid. Khachatryan can then be seen slapping RPA politician Edmond Kirakosyan – allegedly in response to being grabbed inappropriately – before he slaps her in response. The protester’s hair is then pulled from behind and she is violently shoved out of the room.

Members of Yelk, a less radical opposition group also represented in the council, can be seen trying to separate the two sides.

On the same day, Yerkir Tsirani supporters staged a protest outside the Yerevan mayor’s office demanding council members who used force against their colleagues be brought to justice.

Activists held signs saying: “Violence breeds violence!” and “You have created a vile stench in our country!” along with chants of “Shame!” and jeering at officials as they left the building.

Following the incident, Mayor Taron Markaryan issued a statement playing down the issue. “We also condemn the use of force. But no one here today was subject to the use of force by anyone else,” he said.

Zaruhi Postanjian, the outspoken leader of the Yerkir Tsirani party, remained in the hall as her colleagues were removed to deliver a final message: “That foul smell will accompany you wherever you go,” she said. “Even your expensive perfume and cognac won’t save you… We are going to poison your lives.”

Afterward, she told local journalists that as the fighting took place, her party’s office was broken into and the sewage was poured over her furniture.

Yerkir Tsirani currently holds three seats in Yerevan’s 65-member council. Postanjian and her colleagues have frequently clashed with the mayor and members of his party.

The Brawl at Yerevan City Council: What You Need to Know?