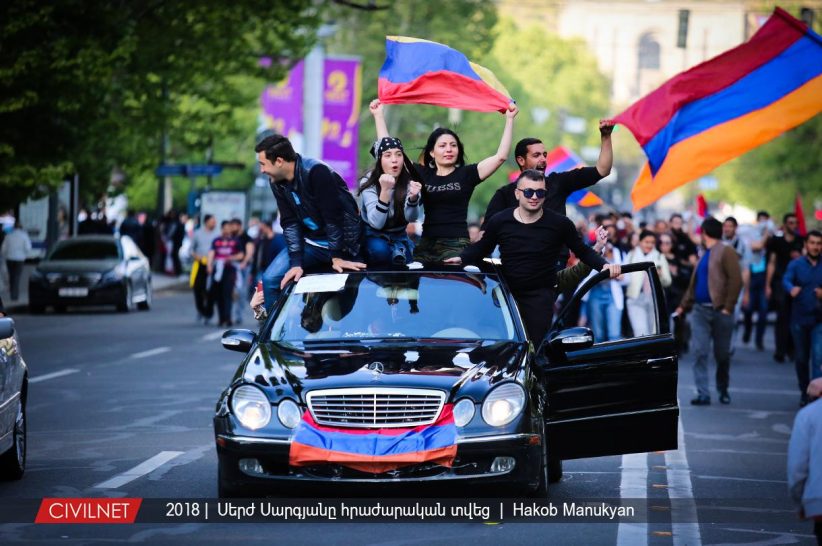 Nikol Pashinyan has called this a ‘Velvet Revolution’, modeled after the ‘Velvet’ or ‘Gentle Revolution’ that took place in then-Czechoslovakia, a non-violent transition of power that took place in 6 weeks between November 17 and December 29, 1989. In Armenia, over the course of 12 days of civil disobedience, public protests and demonstrations, the movement leaders, starting with Pashinyan, have called for non-violent, peaceful protests. With messages of love for the police and an ‘Open Hands’ policy to show their peaceful intentions, the demonstrators have been quick to denounce and separate themselves from the few random violent skirmishes that have taken place.

Depending on what news outlets you follow, you could find yourself confused as to what is happening on the streets here in Yerevan. A Facebook post earlier in the week showed the difference in coverage of the ‘RejectSerzh’ movement in two different publications — one European and one American — on the same day, April 23, 2018 :

Newsweek.com had this headline on the same day: “What’s Going On In Armenia? Leader Resigns Following Violent Protests”

While there was one clash between demonstrators and the police on the second day of the protests, where barbed wire was placed in front of Bagramyan 26 and stun grenades were used, the movement of 100,000 people just in central Yerevan alone, moved forward in a non-violent and non-confrontational manner. After that second day clash, police refrained from violent tactics, and while they did detain hundreds of individuals, there were no real clashes between demonstrators and police.

Why did Newsweek.com decide on that headline? Was it for the clicks? Do they have a specific perspective on demonstrations and public acts of civil disobedience? Do Americans view public protests in a specific way? How does this differ from Eurasia.net’s perspective and why?

The movement in Armenia over these 14 days has had very specific messaging from the organizers and activists themselves, something they have reiterated on a daily basis. The terms ‘non-violent,’ ‘velvet,’ ‘love,’ ‘peaceful,’ have been repeated, both as representations of the struggle, and as teaching tools, to ensure that the huge numbers on the streets become a positive tool in the hands of the protesters, and are not used against them if the crowds begin to behave like mobs.  How these messages are then delivered to the readership of the publications has a significant impact on the assumptions made by the public at large, and in this case, specifically in the large Armenian Diaspora, and the international community that has invested in Armenia’s development and wants to see change.