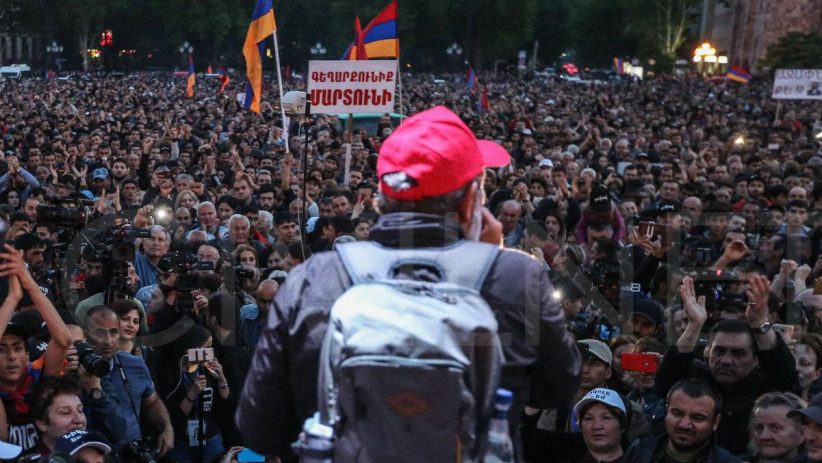 “The ceasefire hangs from a very thin thread, and the slightest provocation can create a large issue. I do not see the prospect of a settlement in the near future,” says Baku-based political analyst for JAMnews Shahin Rzayev, in a conversation with CivilNet’s Stella Mehrabekyan. Regarding the recent tensions in Nakhichevan, Rzayev believes that this was a test to see how the new Armenian authorities would react.

Mehrabekyan: What was the reaction of the Azerbaijani public to Armenia’s Velvet Revolution?

Rzayev: Initially, the public observed the events with great interest and curiosity. Most expected that soon authorities will crack down on the protesters, some even expected bloodshed. When Sargsyan resigned, curiosity gave way to bewilderment. “How was that possible?” “Did he really give up his power so easily?” “Is this even possible?” Various conspiracy theories emerged on who stands behind Pashinyan – the West, Russia, the Diaspora or someone else. After a while, after Pashinyan’s visit to Nagorno-Karabakh, the attitude towards him became much more negative. At the same time, the opinion that Pashinyan is a temporary figure still holds. “The servant did his job, and he will leave soon.” New elections will be held, and then the real “leader” will come. It will then be possible to speak with him. Pashinyan himself is considered more of a populist who was needed temporarily.

Rzayev: The mood in Azerbaijan is always changing. Today in the society there is a strong dissatisfaction with the authorities because of social issues and the energy crisis caused by the fire at the Mingachevir power station. But there are no mass protests and nothing like that is expected. The preconditions for the repetition of the Armenian, and even earlier Georgian, scenario are not there. The authorities carried out all the necessary preventive measures in advance. They control the activities of the NGOs, they have tightened the accreditation rules for foreign media, and they have ensured that there are almost no local independent media remaining in the country. For a long time now, no one has been taking the political opposition seriously. The probability of an emergence of a new leader, of a new movement under such circumstances is close to zero. It’s another matter if there is dissent within the most powerful elite, but so far that is not visible.

Mehrabekyan: Azerbaijan and Armenia continue to arm themselves, military rhetoric is heard more often. Several years ago, in an interview with CivilNet, you stated that the ceasefire was hanging from a thread. Do you see any prospects for solving the conflict in the foreseeable future?

Rzayev: I hold my opinion. The ceasefire hangs from a very thin thread, and the slightest provocation can create a large issue. I do not see the prospect of a settlement in the near future. Since, I repeat, Nikol Pashinyan is still not taken seriously by Azerbaijani authorities. They are waiting for him to either consolidate his power definitively or for a real leader to emerge with whom it will be possible to negotiate “substantially.” Moreover, it seems that Pashinyan himself does not want to force anything because he considers himself unauthorized to speak on behalf of the Karabakh Armenians. We immediately interpreted these words as an attempt to disrupt the established negotiating format and delay the negotiations. By the way, this option suits our authorities as well. No one is in a hurry to make an unpopular compromise.

Mehrabekyan: In your opinion, what is the reason for the intensification of the situation in Nakhichevan, and how likely is the possibility of increased tensions along the Armenian-Azerbaijani border, beyond the borders of Karabakh?

Rzayev: The Nakhichevan incident, in my opinion, was a test to see how the new Armenian authorities would react. As a matter of fact, Azerbaijan acted strictly within international law and agreements with the Armenian side. Azerbaijan carried out engineering works on its own territory and did not cross the state border. But the subsequent statements about the “liberation of 11,000 hectares” prove that it was a calculated action aimed at “tickling the nerves” of the new Armenian authorities. In my opinion, the operation was successful, Azerbaijan achieved what it wanted. The likelihood of escalation of large military actions both in Karabakh and on the Armenian-Azerbaijani border is still low. However, such “nerve tickling” will continue, and not necessarily in Nakhichevan, but possibly in the northern part of the border as well, where several Azerbaijani villages are under the direct view and observation of Armenian forces.

Read the interview in Russian (original).

Read the interview in Armenian.