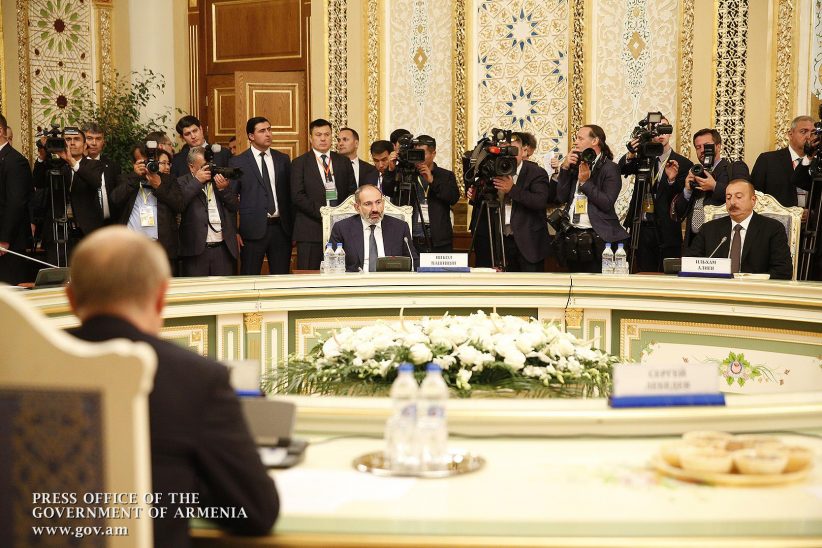 In what became their first ever conversation, leaders of Armenia and Azerbaijan agreed to work towards reduction of frontline tensions and to resume direct dialogue. Nikol Pashinyan and Ilham Aliyev met during the Commonwealth of Independent States (CIS) summit hosted in Dushanbe, the capital of Tajikistan, on September 27-28. The development seems to signal a change in policy previously declared by Pashinyan not to negotiate on Nagorno Karabakh’s behalf.

Speaking via his Facebook account, Pashinyan described the conversation as follows: “We agreed to instruct our defense ministers to take concrete steps on the borderline and in general to reduce tensions… I informed [Nagorno Karabakh President] Bako Sahakyan about this agreement, and this agreement was also acceptable for him. In essence, we can say that there is an agreement that measures will be taken to prevent the ceasefire violation along the Armenian-Azerbaijani border and along the Karabakh-Azerbaijan line of contact.

“The third important point is that we have agreed to establish a direct communication channel, [though] we have not reached a specific agreement on technical terms, we have just agreed that we should assign our respective departments to develop such a system of operative communication.”

The Azerbaijani government confirmed these agreements were reached.

Prior to the Aliyev-Pashinyan meeting in Dushanbe, their foreign ministers met in New York along with French, Russian and U.S. mediators, who once again called on the parties to reduce tensions. During the CIS summit, Russian president Vladimir Putin approached Pashinyan to discuss Armenian-Azerbaijani issues; Putin had visited with Aliyev in Baku earlier in the day.

The agreements to reduce tensions have been the focus of Karabakh negotiations since the two sides fought a brief, but intense war in April 2016. In subsequent talks in Vienna and St. Petersburg, Armenia and Azerbaijan committed to specific measures to that effect, such as doubling of the number of international monitors from about half a dozen currently. Subsequently, Azerbaijan refused to implement that agreement.

However, after several operational setbacks in 2017, Azerbaijan moved to reduce frontline tensions anyway. Last October, Aliyev met with Pashinyan’s predecessor Serzh Sargsyan in Geneva, Switzerland, and “agreed to measures to further reduce tensions so that we don’t have soldiers killed on the frontline, on both sides.” Since then about 20 soldiers have been killed in various frontline incidents on both sides, five of them in the last couple of weeks, as sniper attacks intensified. This month, after a long hiatus, Azerbaijan also resumed shelling of Armenian border villages.

This, most recent uptick in violence was likely intended as a measure to get Pashinyan’s attention and it appears to have succeeded.  At the same time, by agreeing to negotiate cease-fire issues with Azerbaijan directly, Armenia’s prime minister appears to have moved away from his earlier position that he could not negotiate on behalf of Artsakh (Nagorno Karabakh).

Speaking at the United Nations General Assembly earlier in the week, Pashinyan put the resolution of the Karabakh conflict in the context of genocide prevention. “Karabakh must not be a part of Azerbaijan, unless one wants to trigger a new genocide of Armenian people,” he stressed.

Addressing the mass rally of his supporters in Yerevan, then prime ministerial candidate Pashinyan pledged that “Nagorno Karabakh will become an inseparable part of the Republic of Armenia.”

The article was originally published on the  Focus on Karabakh, a project of the USC Institute of Armenian Studies