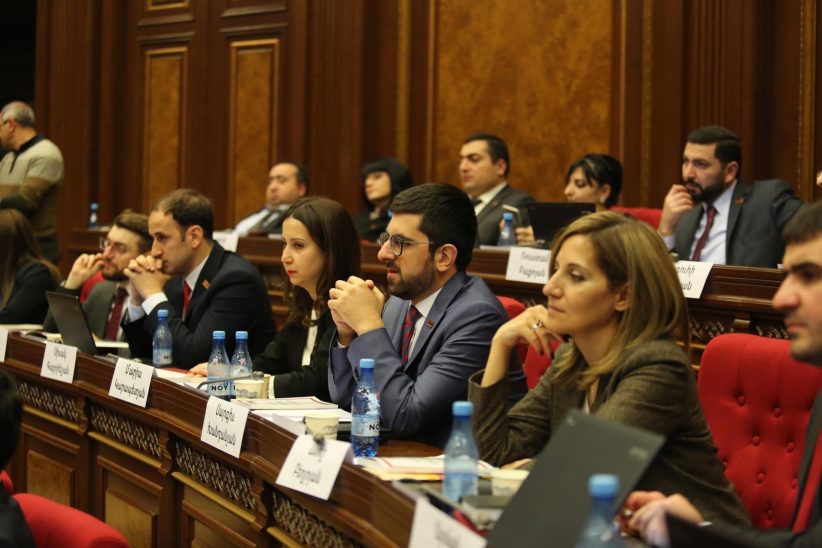 According to the constitution, at least one of the vice presidents must be from the non-majority party.

Lena Nazaryan and Alen Simonyan were nominated by the majority My Step Alliance. There were two nominations for the for the third seat – Vahe Enfiajyan from Prosperous Armenia Party and Mane Tandilyan from Bright Armenia Party.

Lena Nazaryan got 124 for, 3 against; Alen Simonyan got 109 for, 20 against; and Vahe Enfiajyan got 108 votes for; while his opponent from Bright Armenia Party, Mane Tandilyan got 19 votes for.

As a board member of the Civil Contract Party (Nikol Pashinyan’s former faction), Nazaryan ran under the Way Out Alliance (Yelk) during the 2017 parliamentary election and was elected. On April 13, she joined Ararat Mirzoyan in lighting smoke flares in the parliament to call attention to the protests against the transition of Serzh Sargsyan from President to Prime Minister, on April 11, 2018. The protests, which became known as the  Velvet Revolution,  resulted in Sargsyan’s resignation.

More: Armenia’s Revolution: A Flickering Light in a Darkening Europe

Simonyan was also a member of Armenia’s Parliament and former member of the Yerevan City Council.

Enfiajyan is a Prosperous Armenia Party member, elected into parliament in 2009. The party is led by the tycoon Gagik Tsarukyan. Vahe Enfiajyan and his party were recently accused of having used 390 fake accounts on Facebook during the election campaign to create an impression of having a high level of support online.

Read More: A Look at Armenia’s Elections, What’s Next?

For the first time since the 1990s, the former ruling Republican Party of Armenia, as well as the Armenian Revolutionary Federation, have been voted out of parliament.