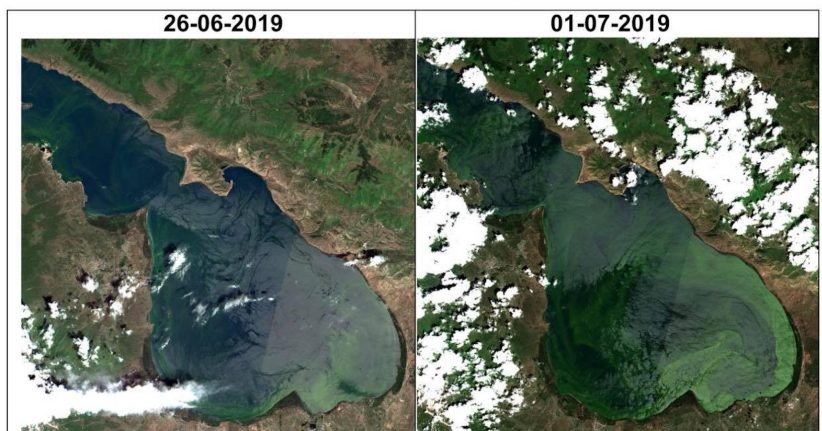 Earlier this month, Armenia’s government posted satellite images showing important parts of the lake covered in green. The coloring is caused by a significant algae bloom in the lake.

The images have raised public concern over one of the largest freshwater high-altitude lakes in the world.

Seyran Minasyan, director of the Institute of Chemical Physics of the National Academy of Sciences of Armenia, says the blooming process begun roughly 60 to 70 years ago when water started being used for irrigation and electricity.

Lake Sevan is situated in Armenia’s Gegharkunik Province, at an altitude of 1,900 m above sea level. The total surface area of its basin is about 5,000 km2, which makes up one sixth of Armenia’s territory.

Minasyan says that the declining water levels is one of the threats to the lake, but it’s not the only one.

“The first reason is lower water levels. But when the levels began to rise in 2011, large areas of trees and bushes remained under water. This situation was badly managed, and about 4,000 hectares of forest remained under water, which naturally worsened the quality of the water,” Minasyan told CivilNet.

In addition, Minasyan notes that sewage from nearby towns and villages is also discharged into Lake Sevan, disturbing the food chain that’s comprised of unicellular free-floating algae, animals, invertebrates, other high grade water plants, and the fish.

According to him, these issues can be resolved only if there is good management on the part of the government. “The serious danger to Lake Sevan is the extremely bad management,” he adds.

During a parliament session on July 9, Armenia’s Minister of Environment Erik Grigoryan said that a similar algae bloom occurred in the summer of 2018. He said steps are being taken to tackle the issue, but he remained vague on specific strategies.

“There is no well-grounded data on declining numbers of fish species. Before the algaewater blooming, we had clarified that due to the temperatures, as well as the flow and volume of these wastewaters, we expect the repetition of what happened in 2018, when the water largely turned green,” Grigoryan mentioned.

The Ministry has not yet responded to CivilNet’s inquiry about the methods being used to clean the lake.

Vardan Melkonyan, Chairman of the Water Committee at the Ministry of Energy Infrastructures and Natural Resources, told reporters that  significantly less water has been drawn from Sevan this year, roughly 29 million cubic meters compared to 43.5 million in the same period of 2018.

Arman Suleymanyan, a journalist who has been working on a documentary about the situation on the lake, says there is no collaboration between scientists and the Ministry of Environment in Armenia.

“Our Ministry has not reported on the quality of the Lake Sevan for 30 years. Do we want to have sewage in this lake? Do we want clean water for fish? Or, do we want a water turbine rotating in the lake? There is no understanding of strategies, it’s simply a joke,” Suleymanyan told CivilNet.

On July 16, Irina Ghaplanyan, Armenia’s Deputy Minister of Environment, wrote on her Facebook page that the lake has began a ‘self-cleaning’ process. “Today the transparency of surface water was 6.5 meters, while on June 30 it was 1.5 meters,” she wrote.

Ghaplanyan posted a picture of the lake showing that the water is becoming more blue.

According to Minasyan, if the lake turns into a swamp, the Gegharkunik region will no longer be suitable to host towns and villages, and the population around the lake may have to resettle.