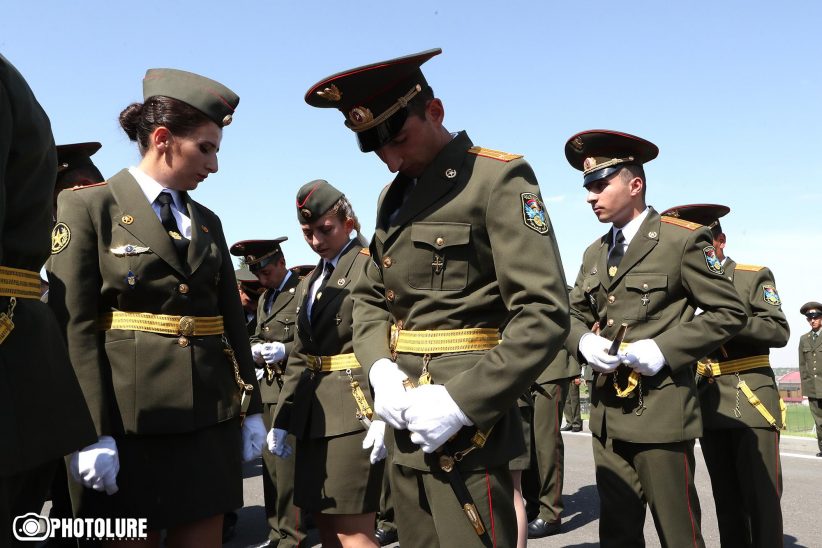 Following the event, Pashinyan wrote on his Facebook page that this was the first time an Armenian leader has addressed male and female officers in the army.

Pashinyan added that he is convinced the day will come when Armenia’s military will have female generals as well.

There were 244 graduates at the ceremony, all receiving the title of lieutenant. Pashinyan wished them a productive path and reminded them that their orders should always be well thought-out and justified as they serve the Armenian Armed Forces, the Republic of Armenia, and the Armenian people.

The number of people serving in Armenia’s army is confidential. Armenia’s Ministry of Defense has not yet responded to an inquiry from Civilnet on what percentage of the army is made up of women.

In a country where women make up more than 50 percent of the population, only 23 percent of the parliament is currently composed of women, while there is only one female minister among 15 cabinet members.

Article 133, Paragraph 14 of Armenia’s Electoral Code states that no political party or alliance can have more than 70 percent of a given gender in their candidate lists during elections. In practice, this means that 30 percent of each party’s candidates must be women. The Central Electoral Commission (CEC) is in charge of enforcing the mandate.

Will a New Armenia Make Room for Women in Government?