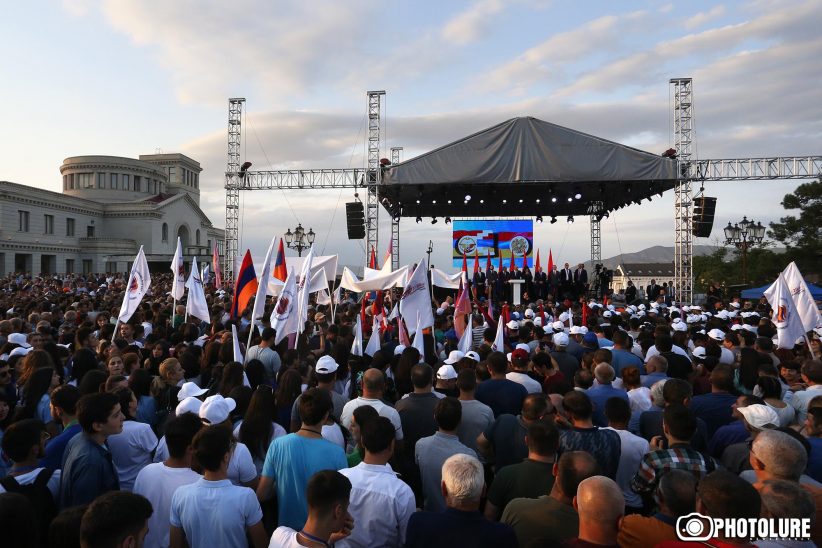 On August 5, Prime Minister Nikol Pashinyan spoke in Nagorno Karabakh, at a rally celebrating the 7th Pan Armenian Games. For the first time in its 20 year history, the opening ceremony and commemorative events took place in Karabakh.

Pashinyan’s speech lasted one hour and seven minutes. He spoke at the Renaissance Square in Stepanakert, emphasizing the role of the Diaspora in Armenia, Karabakh and the future of the country.

The prime minister welcomed citizens of the Republic of Armenia, Karabakh, and the Diaspora. He preceded with a moment of silence to honor those who died in the Karabakh War, noting that their dedication made it possible for the prime minister of Armenia to deliver a speech to Armenians from around the world Stepanakert.

Pashinyan said that the peaceful Velvet Revolution that took place in the spring of 2018, which brought him into power, should have a direct impact on the lives of those living both in the Diaspora and in Karabakh. He said the question of what that impact should be is the question that should be discussed today.

“The process of revolution was not limited to the Republic of Armenia but spread all over the world from São Paulo to Los Angeles, Paris to Sydney, London to Khabarovsk,” Pashinyan said.

Thousand of people from Karabakh were also actively involved in the revolution, he noted, and some of them are now members of Armenia’s government.

Karabakh and Armenia are one, Pashinyan emphasized.

Pashinyan also made a slight against the president of Karabakh, Bako Sahakyan, who he has spoken out against previously.

“I consider it very important that the forthcoming presidential and parliamentary elections in the Republic of Karabakh be held in a free, competitive, democratic environment and to provide real guarantees for the free expression of the people’s will,” he said. “Accordingly, the Republic of Armenia should act and will act as a guarantor of the free will of the Artsakh people and the formation of a legitimate government through that expression.”

Pashinyan then touched upon the Diaspora’s place in today’s Armenia.

He mentioned the introduction of the High Commissioner for Diaspora Affairs, which aims to bridge the gap between Armenia and the Diaspora.

The prime minister emphasized that the development of Armenia and Karabakh as technologically competitive and attractive countries must become the most powerful impetus for repatriation. The Ministry of High-Tech Industry has been set up, Pashinyan said, to make security needs a driving force for the development of the economy.

Pashinyan then presented his government’s goals for the Republic of Armenia that he hopes the country will meet by 2050. The goals include increasing the country’s population to 5 million, creating 1,500,000 jobs and eliminating poverty, multiplying Armenia’s GDP by 15, implementing an average minimum wage, and ensuring access to health care for all.

The prime minister then spoke on strengthening the education system of the country, saying that the only guarantee of prosperity in the 21st century is competitive education.

“We must create all the conditions necessary for competitive education to become accessible to all social and age groups,” the he said.

The logic of pan-Armenianism, Pashinyan said, can truly exist if a few key consensuses are agreed upon. He noted that the vision of a non-violent society and nation should become the cornerstone of nation-wide unity and that the people and their free will are the only source of power. The rule of law and the equality of all before the law must become the axis of international relations, he added.

Pashinyan ended his speech emphasizing that the slogan of the Armenia people should be, “Armenia is my home, its people are my family.”