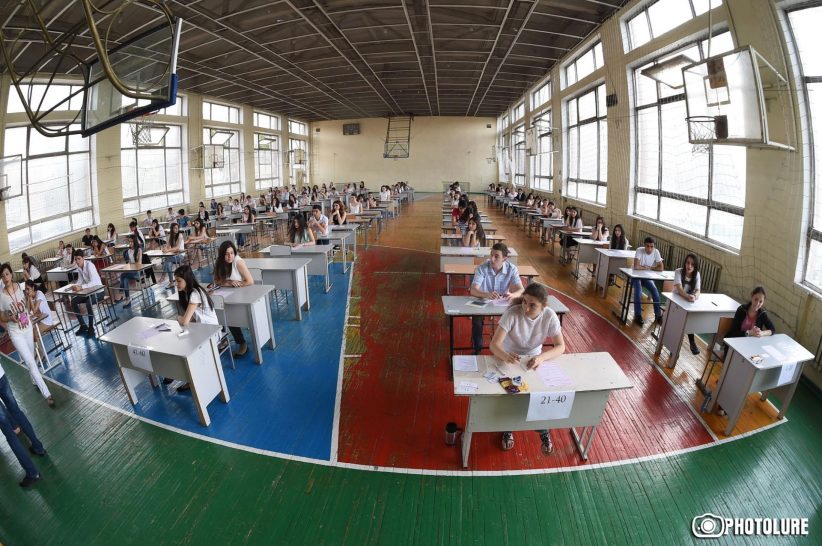 The government of Armenia has emphasized educational reform as one of the prerequisites for the sustainable development of the country.

Armenia is currently transitioning from the Soviet-era system of 10-year schooling to a 12-year education cycle, composed of a three-tier system that includes primary, medium and high schools. More than 1,400 general education schools are operating throughout the country.

Despite reforms in the education sector aimed at equal accessibility for all, the overall quality of education remains a problem in the country.

According to Unicef, 70 percent of children in the country do not receive the education that would allow them to reach their full potential and have the chance to live healthy and productive lives.

CivilNet’s Stella Mehrabekyan spoke with Arevik Anapiosyan, Armenia’s Deputy Minister of Education, Science, Culture and Sport, about her thoughts on the necessary reforms in the country’s educational system.

Corruption in the Education Sector

Before the Velvet Revolution of Spring 2018, there was widespread corruption in Armenia.

In a survey led by Transparency International Global Corruption Barometer 2013, results showed that 61 percent of the respondents classified corruption in the country’s public sector as a very serious problem.

Anapiosyan says strict measures are now applied by the Ministry of Education to solve these issues. One of the measures the Ministry has taken is to require the certification of school directors. In accordance with article 29 of the Republic of Armenia Law on General Education, future directors should pass an examination led by a collegial body of the institution, the Board. The Board conducts an interview to test the candidate’s practical skills. The questions are chosen by the contender by lot. The candidate is given up to 15 minutes to prepare the answers to the questions.

“We did not tighten up the rules. The procedure is now conducted in a proper way. We noticed that after taking exams properly, 40 percent of attendees did not pass the oral examination stage. Now, we want to believe that the criteria that were applied during the exams will allow to have better knowledgeable school directors,“ Anapiosyan said.

Teacher trainings are one of the main concerns of the Ministry of Education. According to data published by the Republic of Armenia National Statistical Service for the 2012-2013 academic year, only 27,949 teachers out of the existing 40,830 note that they have participated in any training, of which 24,223 teachers were trained in the past 5 years. Thus, only 68 percent of teachers received training. In comparison, 88.5 percent of teachers in the Organisation for Economic Co-operation and Development (OECD) countries underwent training in the past 18 months.

In an assessment of teacher professional development and educational content led by the Open Society Foundation, an organization that aims at ensuring freedom, democracy, and human rights, it was found that “the material transferred to the learners is derived from the textbook, containing mostly academic content on the subject matter including factual, theoretical and fundamental knowledge. Meanwhile, knowledge acquisition is tested based on measurable knowledge rather than the mastery of critical knowledge.”

Critical thinking in education practices is lacking in the Armenian education system.

“If the teacher is dogmatic, it is impossible that this person leaves the floor open for debates in the classroom. If we want to have quality teachers, we need teachers with analytical mind, critical thinking. I think that we, as Ministry of Education, Science, Culture and Sport, have no right to put our country’s future  in danger by raising a generation that is getting education from teachers with no knowledge,” Anapiosyan said.

Gender equality in the Armenian society is topic constantly debated and inequalities are also reflected at school.

A survey conducted by the World Bank found that 54 percent of teachers in Armenia believe that girls and boys should be treated differently, because “they are essentially different.”

For Anapiosyan,”the change has to come from the cultural system. For the state, the fastest way is through it is done through the content presentation in the school books and not promote the distribution of discriminatory roles.”

School-textbooks and curricula are partially responsible for promoting stereotypical and traditional ideas of womanhood and serve to inadequately represent women, according to Iveta Silova, author of ‘Gender Analysis of Armenian School Curriculum and Textbooks.’ The study notes that Armenian language textbooks and literature rarely include or acknowledge the works or contributions of Armenian female writers and poets.

Anapiosyan adds that another goal of the Ministry is to create a module in the framework of teachers’ trainings dedicated to gender equality. “How would evolve Armenia’s economic situation if husbands left their wives work? We should show what successes the society will experience while becoming an equal society. And here, the teacher has a very important role. Because he/she works at the same time with parents and children,” she said .

The Deputy Minister said that the Ministry will start to structure a program containing three modules, in 2020. For example, Mathematics. Module 1, Teaching Methods. Module 2, Mathematics Course Content. Module 3, Equality Between Women and Men.

“In September 2020, we want to test this standard in one of the provinces and we will see what kind of changes it will bring.”

According to a 2011 survey led by the National Statistical Service of the Republic of Armenia, one-third of schools observed in the course of this research have fairly poor overall conditions of main roads leading to the schools. This is a problem for the rural areas. Some 23 percent of pupils who were surveyed reported that at times they cannot get to school because the roads are in bad condition; another 3 percent say it happens “often” or “very often.”

Besides the physical access to education, finance is also an issue. The amount the state allocates to educational establishments are not sufficient, reports an Open Society Foundation study, and additional fees are required by directors or teachers from parents of students.

“Some 32 percent of pupils surveyed say that they pay a fee for school (monthly, annually, or a fee collected by parents’ council in general),” the report says.

Collecting money from parents for the “school fund” seems to be a widespread practice.

“For me the worst thing about the schools is the circulation of finances in it. Not to mention buying presents for teachers. I consider it a shame that you can give 5,000 AMD ( 2.50 USD) to a teacher and he/she will take it, and this is very common,” says a parent.

“In the framework of inclusive education, a particular attention is paid to children socially disadvantaged. We work with the Ministry of Labor and Social Affairs to ensure their educational inclusiveness. The Ministry of Education has to provide teachers with methodological tools in order to integrate any child and build knowledge for the child,” concluded Anapiosyan.

View the Interview (in Armenian):

Which Reforms in Education After the Velvet Revolution? Talk with Arevik Anapiosyan

Gulf tensions may spill over into the Caucasus