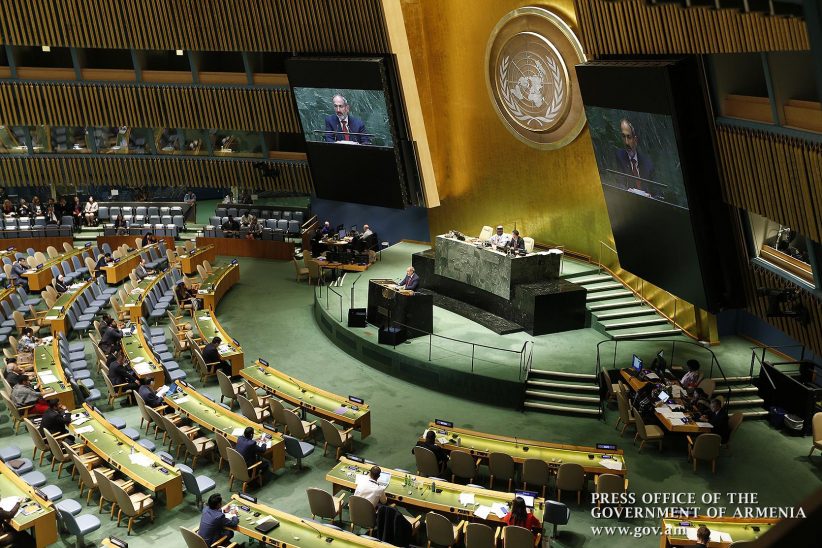 Armenia’s Prime Minister Nikol Pashinyan made a speech at the 74th session of the U.N. General Assembly on September 26. Pashinyan spoke about the achievements of the Velvet Revolution, the fight against corruption in Armenia and the settlement of the Nagorno-Karabakh conflict.

Pashinyan called on Azerbaijan’s president to create conditions for a resolution in the Karabakh peace process. He noted that the peaceful settlement of the Karabakh conflict is of key importance to the stability and security of the region.

“I strongly believe it is the only way to the peaceful and lasting settlement of the conflict because it offers a possibility of compromise, mutual respect and balance,”  Pashinyan stated.

In his speech, Pashinyan criticized the behavior of his Azerbaijani counterpart, President Ilham Aliyev, who he says rejects steps that could lead to a peaceful resolution of the conflict.

Read More:  Does a Rhetoric of Peace Between Armenia and Azerbaijan Really Exist?

“Azerbaijani authorities do not have any intention to solve this conflict. Instead, they want to defeat the people of Nagorno-Karabakh. They do not want to seek any compromise… This is why anti-Armenian hate speech has already become the official policy in Azerbaijan,” Pashinyan said.

Armenia’s leader added that the Azerbaijani government presents the Karabakh conflict as a territorial dispute between Armenia and Azerbaijan – a rhetoric that is unacceptable for Pashinyan.

“We totally disagree with such an interpretation of the conflict. It is not a dispute between Armenia and Azerbaijan. This dispute is not about territorial claims. It is about real people, men and women, and their right to live in their homeland, in the way that their ancestors lived over many centuries,” he said.

Pashinyan concluded his speech stating that the aim of Armenia is not to contribute to the tension in the region but to solve the issue with “consistent work, compromise, mutual respect and balance.”