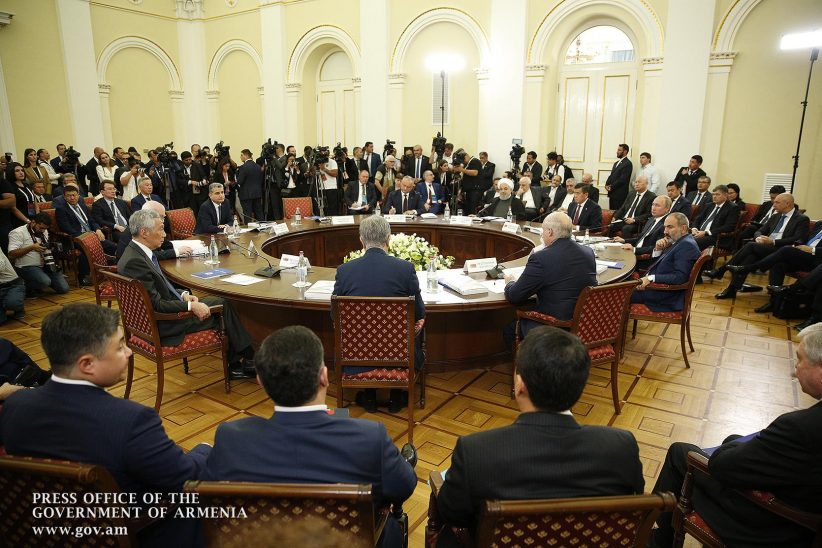 The relations or the lack thereof between the Eurasian Economic Union (EAEU) and European Union (EU) are one of the key topics of debates between international relations pundits. There are different assessments regarding the current situation and forward progress. However, almost all experts agree that the key issue here is the relations between Russia and the West (US/EU/NATO). As long as these relations are at their lowest point since the end of the Cold War, there is almost no chance of any substantial cooperation between these two organizations. The reason behind this logic is clear – the West collectively perceives the EAEU as another offspring of Russian regional policy. From this perspective, Russia is the key decision maker in the EAEU and you may not foster relations with this Union without first having Russia’s approval.

Meanwhile, recent developments may serve as early indications of the US and EU intention to start the normalization process with Russia. EU’s actions are mainly driven by geo-economic interests. European companies need unimpeded access to the Russian market and tit for tat sanction war does not make them happy. The key proponents of the normalization with Russia are Western Europeans led by Germany and France. Many new EU members led by Poland are keen to continue Russia containment policy. However, EU decisions are ultimately influenced by Germany and France, and Eastern Europe has a slim chance to fully thwart possible steps towards normalization of relations with Russia.

US actions are driven by geopolitics. American establishment, both Republicans and Democrats, clearly understands that in the long term the only power which may threaten the US leadership role in the world is China. Thus, Americans are actively pursuing China containment policy and the ongoing trade war is only one layer of this multi-faceted strategy. The US is not interested to have any other major power having a strategic alliance with China. Meanwhile, mainly due to the sharp deterioration of Russia – West relations, Russia is taking steps to deepen its partnership with China. The only way not to allow Russia to be transformed into Chinese junior partner in the West – China strategic competition is to start the normalization process with Russia, which in turn, demands tangible actions to solve Russia – West conflicts in the post-soviet space.

The recent developments are hinting at possible preliminary agreement between two sides on how they may move forward. Creation of the so called “hybrid coalition” in Moldova between pro-Russian socialists and pro-western forces with direct involvement of Russia, EU and the US could be the first harbinger of this path. The initial steps on improvement of Russia – Ukraine relations including the prisoners swap as well as the first meeting between Russian and Georgian foreign ministers since the August 2008 war held recently in New York may be signs of the same process. Here we may add also the West’s relatively calm reaction to the Giorgi Gakharia’s election as Georgia’s Prime Minister, while many Georgian and international experts are pointing to the fact that Gahkaria is perceived as a leader of pro-Russian faction within the ruling Georgian Dream party.

According to several signs from both sides, the possible Russia – West deal (if reached) may include the following steps – the West does not take any actions to bring Ukraine, Moldova, Georgia and Azerbaijan into the NATO or EU. Meanwhile Russia abandons all efforts to bring them into the CSTO or EAEU. These four states are given the possibility to continue developing relations with both Russia and the West. Actions are being taken to restore Ukraine’s control over Donbass and Moldova’s control over Transnistria through the probable implementation of slightly modified Minsk agreements and Kozak plan. Simultaneously, the West does not take steps to pull out Belarus or Armenia from either CSTO or EAEU and Russia does not create obstacles towards these states cooperation with the US, EU or NATO.

In this greater geopolitical juncture post-revolutionary Armenia should make the right decisions and implement the right choices. Unfortunately for Yerevan, the West is not ready and willing to assist the post-revolutionary states in the former soviet space on the scales comparable with those provided to Georgia shortly after the Rose revolution. Meanwhile, the possible launch of the Russia – West normalization process implies that the West will not create an additional hot spot for Russia by actively getting involved in Armenia which will certainly be perceived in Russia as another hostile action.

Thus, Armenia should be cautious not to undermine its strategic alliance with Russia hoping for quick Western actions to compensate possible economic and serious security damages. Armenia should also concentrate its efforts on the successful implementation of the Comprehensive and Enhanced Partnership Agreement signed with the EU in full compliance with the Road Map confirmed by the Armenian Government on June 2019. Given the EU new policy of “More for More”, successful implementation of CEPA will create opportunities to increase the EU support to Armenia in several sectors.

The launch of Russia – West normalization process may foster the establishment of EAEU – EU initial relations. Here Armenia may put added value too given its EAEU membership and being a signatory of CEPA. The key for Yerevan is not to underestimate possible risks in case of significant deterioration of relations with Russia and not to overestimate the Western assistance in its path towards democratization and in providing hard security.

Dr. Benyamin Poghosyan is the Founder and Chairman of Center for Political and Economic Strategic Studies