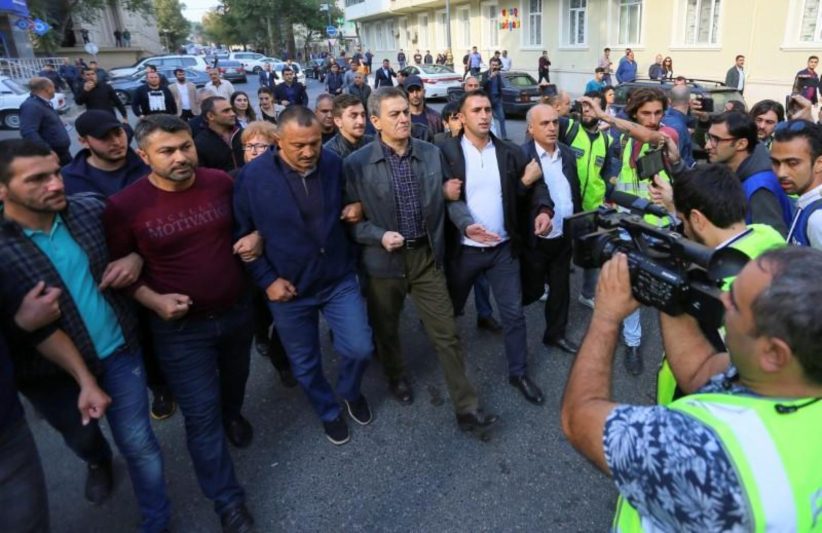 October 19 – Police in Azerbaijan detained scores of protesters, including the leader of the main opposition party, Popular Front, at the start of a planned rally against low salaries, corruption and a lack of democracy in the energy-rich ex-Soviet state on.

The following day, civilians took to the streets to protest domestic violence and lack of women’s rights in the country.

CivilNet’s Stella Mehrabekyan talked to Azerbaijani journalist Seymur Kazimov about the cause and impact of these protests.

On Saturday, October 19, Azerbaijan’s National Council of Democratic Forces (NCDF) held a protest in Baku, demanding freedom for political prisoners, the creation of conditions for democratic elections, lifting restrictions on electricity and natural gas use, restoring child allowance and resolving the Nagorno-Karabakh issue. The opposition leader of the Popular Front, Ali Kerimli, and his supporters were arrested. On October 20, another protest took place in Baku against domestic violence and lack of women’s rights, which resulted in the arrest of several people. At first glance, the demands of the demonstrations are different, but do you think they are related in any way?

These demonstrations are not related. They were organized by different groups. The October 19 protest was organized by the opposition, and on October 20, a march was organized by civil activists, including human rights activists, gender experts and journalists. The second demonstration was mainly focused on the increase of the number of violence against women. Not all of the detainees were released during the first demonstration, some remained in detention for a day. The detainees were immediately released during the march.

Given the scale of messages and campaigns to raise awareness about violence against women, can we call them unprecedented or Azerbaijan? Have there been similar actions in the country in the past?

This year a march called “8 March” took place on March 8. And the October 20 rally had clear demands. One of the main demands was the adoption of the Istanbul Convention [The Council of Europe Convention on preventing and combating violence against women and domestic violence is based on the understanding that violence against women is a form of gender-based violence that is committed against women because they are women. It is the obligation of the state to fully address it in all its forms and to take measures to prevent violence against women, protect its victims and prosecute the perpetrators, ed.]. According to the organizers, 118 women have been subjected to violence in the last nine months, including those killed.

It is clear that the citizens of Azerbaijan are dissatisfied. What are the main social, political and economic demands of the population? Recently, the media has often referred to reforms carried out by the authorities. In your opinion, are these “cosmetic” or “facade” reforms that are far from reality?

People’s demands are multifaceted, ranging from solving social problems to fundamental rights such as freedom of speech and assembly. In addition, preventing corruption is one of the most pressing issues facing the state. Although there are some changes, they are superficial. We have not noticed any radical reforms yet.

The last issue concerns the settlement of the Karabakh conflict. What place does this issue have in the public agenda today? What do the citizens think about the recent meetings and statements of Armenian and Azerbaijani leaders? Do you agree that there is relative peace at the moment?

The issue will continue until a peace agreement is signed between the two countries. The peaceful situation achieved by President Aliyev and Prime Minister Pashinyan at an informal meeting in Dushanbe was also temporary. Although there have been no active hostilities since the April 2016 events [Four Days War, ed.], the ceasefire at the border has always been violated and the parties have suffered losses. Just after the April events, the focus on the Nagorno-Karabakh issue again increased. Although the border is calm at present, it is not difficult to predict how the population will respond to the new situation. In recent months, the rhetoric of political leaders has become even tougher. Pashinyan’s statement in Karabakh and Aliyev’s response to the Valdai conference are vivid proof of that. Pashinyan’s statements “Artsakh is Armenia, that’s all” and “I do not represent the people of Artsakh” have been the subject of discussion in the Azerbaijani community. As you can see, there is a serious contradiction between the two approaches. The answer is that Pashinyan must make a clear decision. By 2020, there will be “elections” in that unrecognized entity. There the members of the old government are still in power. Consequently, Pashinyan’s statements are viewed as a pre-election campaign aimed at the domestic audience. At the same time, it is one of the factors that undermines the negotiation process.

Photo caption:
Head of the Popular Front Party of Azerbaijan Ali Karimli and his supporters hold an unauthorized rally to demand the freedom of assembly in Baku, Azerbaijan October 19, 2019. REUTERS/Aziz Karimov