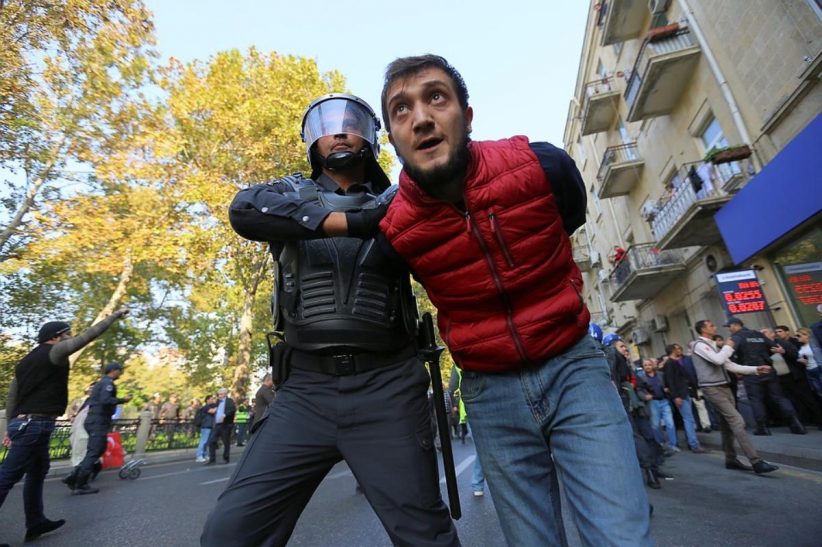 Arzu Geybullayeva is an Azerbaijani columnist, blogger, and journalist for several newspapers and media outlets including Al Jazeera, Foreign Policy, Global Voices, and Agos. She talked to CivilNet’s Stella Mehrabekyan on the recent internal political developments in Azerbaijan.

– In an interview with Civilnet at the beginning of the year, just after the mass protests in Baku demanding the release of blogger Mehman Huseynov, you said: “[…] it is important to see this momentum grow rather than get lost as government takes a step back.” Today, after the protests in Baku on October 19 and 20 in the course of which a number of opposition members were detained, in your opinion has everything come to full circle?

– I think it is far from coming to full circle. Let me clarify this a bit – since the protests in January, we have witnessed a rise in open expression of issues concerning people – these are mostly economic and social grievances that people started bringing up as a result of lack of policies and solutions. In some cases, this had led to positive steps – some reforms have been introduced. I wrote about these in my piece for OC media in September of this year.

People have finally realized that their voice matters and unless they talk about the issues openly, and at times even aggressively as we have seen over the course of this year’s series of small to large scale protests, their problems are there to stay. Tired of their living conditions, they are seeing how much corruption there still is and they have had enough.
Or so I hope. So the key to understanding the events in Azerbaijan as well as the last weekend’s protest lies in the fact that had it not been this “wake up” action on a people level, I am not sure, opposition groups could have gathered so much support. But neither the opposition nor the authorities are doing anything that could prove each other wrong. Replacing veteran politicians with new ones does not solve the problem; similarly within the opposition groups – taking the streets and demanding President’s resignation won’t get them far. But the caveat in the latter case is that the voices of opposition are growing and people are less afraid of taking the streets anymore – so the issue here is designing a strategy, and a path that is solid and can withstand the pressure of the ruling government. And perhaps it is through elections or perhaps it is all of the above. We are yet to see.

My reading of the events overall is that the smaller, but better organized and focused social groups are winning the battle of shifting opinions – such as the women’s march on October 20 – rather than the traditional opposition.

Similarly, online campaigns to end bullying, or end violence against women, or eradicate poverty and so on – are proving to be far more effective as they raise awareness and have an educational angle.

As for the ruling government – well, we have lived under its grip for more than two decades and unless there is evidence of profound shift (certainly appointing one man, who has already served as the head of two ministries, to his next appointment as the Minister of Economy is far away from profound shift) I won’t be adding much meaning to what is going on. Plus the dirty tactics of opinion manipulation, information disorder is still well practiced and alive in Azerbaijan so I will only believe reforms or that the authorities are taking a step back, once I really see it.

– One more quote from your last interview: “In Azerbaijan we have gotten so used to injustice and crackdown.” Have there been any changes in the public consciousness in recent months, and how do you assess the civil society of the country? Do you see the potential which can eventually force an agenda of change and reform?

– I guess, I partially answered this question in my answer to your first question. I think there certainly is potential. The problem is to keep the momentum and not get too comfortable in the status quo. I guess what I would add to what I said in my previous interview would be: In Azerbaijan although we have gotten so sued to injustice and crackdown, people are finally realizing they cannot and should not stay silent. So there is change – gradual, but it is there.

But we all know that for the civil society to fully start operating, they need to see changes in legislation that previously had turned them into ghosts. In the absence of guarantees for a safe, and open environment where they could pick up on the work they left five years ago, we cannot really expect things to go back to the way they were before.

– Ilham Aliyev fired two elderly deputy prime-ministers and called upon all those over 70 years old follow their example paving way for the younger generation. Are these just cosmetic reforms or an imitation of the latest or does Aliyev fully understand the necessity of radical change in the system?

– I think President Ilham Aliyev made a profound mistake when he pushed away the young and smart politicians who could have helped him push the country forward – I am referring to some of his close friends and allies who were there when he first came to power and supported his presidency as well as helped him to keep up with his international image as a reformer as opposed to the old guard he was surrounded with. But power corrupts and as soon as he realized how rich he could be from the energy reserves, he decided he will have this forever and that there was no need to keep the progressive friends around anymore. Those who had the guts to leave, left him; those who didn’t, stayed working in fear; and those who succeeded at manipulating him – well, look at them now – they are getting smacked on their heads so-to-speak.

But how real is this? I cannot really say, or comment because as I mentioned already, Aliyev needs to prove that these reforms and steps are genuine and there is still a chance to do so. Changing the legislation, ensuring that civil society organizations can go back to working; raising awareness; engaging with the people, and really act as a bridge between the people and the government structures – is one way to prove he is genuine.

Elections, of course, would be another way for him to prove he is genuine. Will we see democratic municipal elections in December? Will, the opposition parties have space and freedom to campaign ahead of the parliamentary elections next year?

Will he put an end to the likes of Mirshahin and other pro-government media propaganda outlets to stop spreading false information?

I think these are the questions we should be asking. Otherwise, replacing two outdated state officials and then accepting the resignation of the head of the presidential apparatus, isn’t a strong signal in and of itself.

– Does the public see a real, visible alternative to Ilham Aliyev or the Aliyev family and in case there is such an alternative, how prepared is society for mobilization?

– The only way to answer this question is to have early presidential elections – but a free and fair one – not the kind that Azerbaijan has been having since 1993. Since there is no chance (yet) or conversation around this at the moment, it is hard to say what people/public see as their alternative. I think there is certainly an awareness that things have changed and gone are the days of the oil boom; but people’s priority at the end of the day, is first having access to good education, healthcare, social care, knowing that the government can provide and care for them; now that they see there is no such thing – they are waking up to the fact that they cannot live like this forever and that the only way to change this, is to demand – individually (as we have seen singular cases of citizens protesting in front of government buildings) or in groups (as we have seen the women’s march, or the parents who are concerned about bullying in schools, or village residents who don’t have access to water, electricity or gas). So there is a gradual understanding that issues in these basic social services, are the result of lack of functioning structures that ought to deliver these services, and the reason there is a lack of these structures, is because they are not managed properly and that all of this is linked to a government that ought to care for its citizens.

The issue, the way I see it, is that people still consider Ilham Aliyev and his wife, Mehriban Aliyeva as two people who can help them. They trust them, but not the government they are running. This is why, often people call on the President to do something about their issues because they feel like it is not the president who is doing things wrong but it is the people and structures around him.

Surely there are those who believe all of these problems are directly related to having a president who is not interested in the wellbeing of the people but I can not be sure I can tell you which of the groups outweigh the other.

I am thinking of the example in Turkey. Remember how President Erdogan annulled municipal elections earlier this year when the opposition party won in Istanbul? Imamoglu was not known widely at all. He gained popularity and support by talking to people. By traveling across the country. By reaching out to the most marginalized groups and he was not afraid that one group may not vote for him because he expressed support for the other or that he openly had a meeting with this group or another. And this is what people liked about him. They saw Imamoglu as their representative because he embraced them all and he was embraced in return. And so when the election results were annulled, the next voter turnout was so much higher, that it proved a very important point – when you take away something from people and tell them they don’t know what is good or bad for them, people may listen to you for a bit, they may consider this to be the right case – but once they see (over the years) that they were right from the start, and that they were just being used for personal and narrow political gains, they eventually stand up for it – and this is what Turks did in the second round of these elections – they stood up for what they value.

So I think in Azerbaijan too, once people realize that they have been lied to, they would stand up and demand their rights – the problem is whether there are going to be the right circumstances and guarantees in place for that to happen. And that is the biggest difference between the case of Turkey and Azerbaijan – elections here still have a role to play whereas in Azerbaijan this is out of the question. People in Turkey can still organize, openly demand their rights, even though also at great costs – whereas in Azerbaijan, authorities won’t even allow the rallies and when they do, they send them as far away as possible.

Surely there is always a possibility for Lebanon or Chile style mass protests to take place – but here again – police brutality and government response are key.

– What’s the place of the Karabakh issue in the public agenda of Azerbaijan, is its resolution as crucial as social, economic problems?

– The resolution of Karabakh is important. The question is what kind of resolution we are talking about here – and that is where I am afraid I cannot comment on accurately.