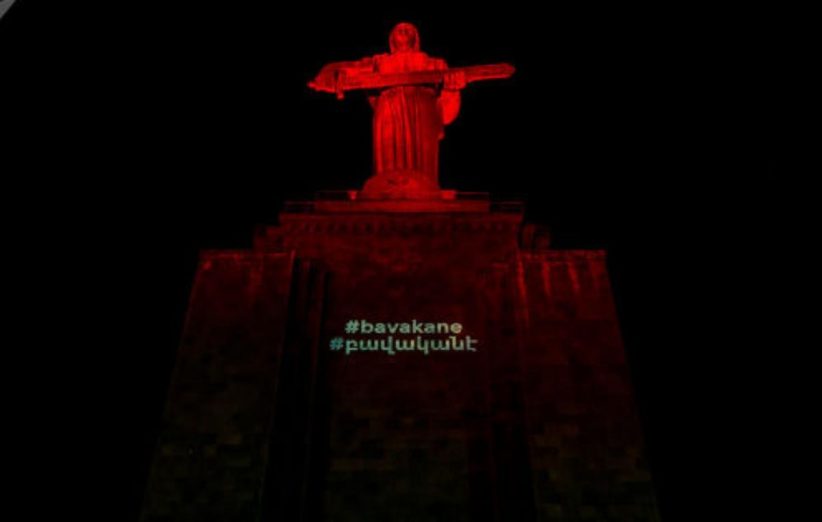 On October 12, the United Nations International Day of the Girl, a blood color garment was projected onto the monumental Mother Armenia statue in Yerevan. The bright red color was meant to highlight the issue of selective abortion in Armenia.

The hashtag #bavakane, meaning ”enough” in Armenian, was projected under the statue to protest sex selective abortion, which has had an unprecedented affect on the female population in the country.

Doping Creative Advertising, an Armenian design and production company, was behind the social campaign to raise awareness on the issue of selective abortion.

“We understood that here in Yerevan, few people are aware of this issue. We wanted the campaign to have big exposure,” said Hovhannes Margaryan, Creative Director at Doping.

In the last 25 years, since the collapse of the Soviet Union, more than 40,000 unborn females were aborted. Armenia has the third highest sex selective abortion rate in the world, behind China and Azerbaijan.

The 2016 UNFPA report on Public Inquiry into Enjoyment of Sexual and Reproductive Health Rights note that more than 1,400 conceived girls are not born in Armenia every year. By 2060, almost 93,000 girls will not be born in Armenia if the tendency of sex-selective abortions or sex selection until childbirth remains unchanged.

The decrease in such a short period is undoubtedly a success.

According to  Tsovinar Harutyunyan, assistant representative of the UN Population Fund of Armenia (UNFPA), there are four main reasons for the gender-biased sex selection: economic, bloodline, security and power, and authority.

“Families think that the male is the one keeping the household and will ensure the lineage of the family,” Harutyunyan explained to CivilNet.  “Within Armenian society, [men] are more capable of becoming  successful in their career due to gender inequalities..”

End to Sex-Selective Abortions in Armenia?

Let it Be a Girl (in Armenian)