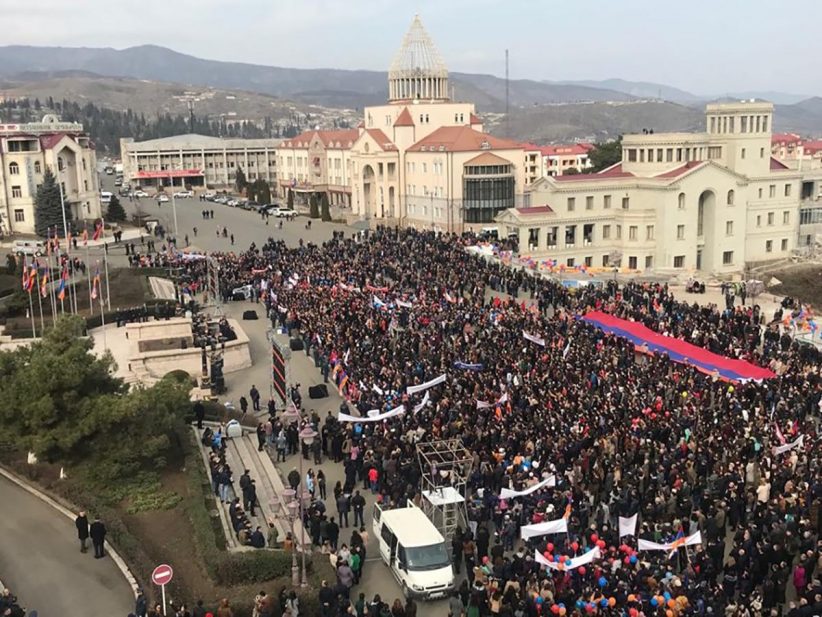 “We are sincere in our aspiration for peace in the region, and are open for a dialogue to reach a solution to the [Nagorno Karabakh] conflict,” said Armenia’s Prime Minister Nikol Pashinyan on Wednesday in Milan, during an official visit to Italy.

On the first day of his official visit to Italy, Nikol Pashinyan visited the Italian Institute for International Political Studies and the ISPI Brain Center. He delivered a speech where he initially spoke about relations with Italy as well as the 2018 Revolution, but continued onto detailing his stance on the Nagorno Karabakh issue as well as how to attain a peaceful resolution.

He reiterated his position that any solution to the Nagorno Karabakh conflict “must be acceptable for the peoples of Armenia, Nagorno-Karabakh and Azerbaijan. This is our approach, and we are ready to negotiate on the basis of this new paradigm.”

Pashinyan stated that Armenia is taking “concrete steps towards a mutually-acceptable solution to the conflict.” The PM said he received criticism within Armenia for affirming that the resolution must also be acceptable to the Azerbaijani people, but decided to stand firm in his belief that this is the only viable basis for peace.

Pashinyan affirmed that the Nagorno Karabakh conflict is the “biggest security challenge” for Armenia, and that the threat of an escalation is constantly looming.

For Armenians this is not a “territorial conflict” said Pashinyan, but rather about the self-determination of the people of Nagorno Karabakh which legally sought independence from the Azerbaijani SSR, within the frameworks of the Soviet Constitution.

The PM said however that though the stance of the Armenian Government has changed, the position of Baku has not, but hoped that Aliyev would adopt this position of finding a solution acceptable to all parties.

Pashinyan went on to denounce the Azerbaijani Government’s rhetoric which has been continuously threatening a “military solution.” Furthermore, that the Aliyev Government is inflaming “anti-Armenian sentiments” in Azerbaijan, as well as refusing to negotiate with the representatives of Nagorno Karabakh.

He reminded the audience in Italy that when politician and diplomat Mario Rafaelli chaired the OSCE Minsk group, tasked with encouraging a peaceful solution to the conflict, meetings did take place between the heads of Azerbaijan and Nagorno Karabakh. So, this turnaround, was “rather odd,” said Pashinyan.

Prime Minister Pashinyan rejected any military solution to the conflict and repudiated the reality that would cause, even raising concerns that such a conflict could be a hotbed for the same sort of militants and groups that flourished in the chaos war caused in Iraq and Syria.

Pashinyan stated that the conflict would be “impossible to settle without hard and consistent work, without compromise, (and) mutual respect.”

The PM encouraged the Azerbaijani Government to adopt a new approach to conflict resolution, much like the Armenian Government has, and that once a new basis to peace negotiations is established, only then will a proper breakthrough towards a peaceful settlement will be possible.