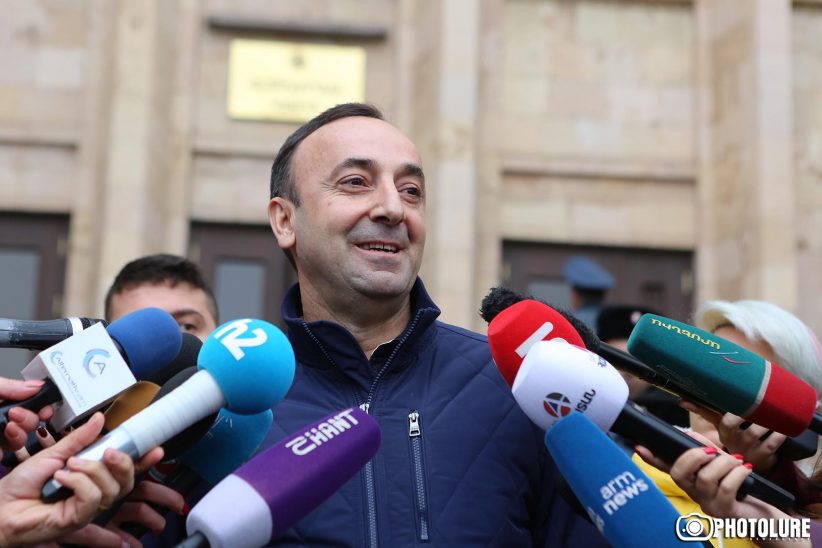 Hrayr Tovmasyan, President of the Armenian Constitutional Court was interrogated today by the Special Investigation Service (SIS) of Armenia according to his lawyer, Amram Makinyan.

Tovmasyan refused to testify but as a preventive measure, he undertook not to leave on his own recognizance whilst the investigation is ongoing.

The criminal case relates to Tovmasyan’s tenure as Minister of Justice between 2010-13. Earlier charges were brought against his godson Norayr Panosyan, a former official of the Ministry of Justice. According to the charge, Tovmasyan illegally used his position as minister to acquire the premises of a notary office in Yerevan’s Kentron district.

Tovmasyan is also accused by Arman Babajanyan, a parliament member who has filed a lawsuit which alleges Tovmasyan assumed the office of the President of the Constitutional Court before resigning from his post as a National Assembly member, which is contrary to reguation.

Tovmasyan said today to reporters after being interrogated, “It is not a secret (…) that during the past 6-7 months the Constitutional Court worked under unprecedented pressure. (…) But during this period the Constitutional Court, to the glory and honor of all judges, worked without any impediments and adopted decisions which will be a breakthrough for the future of our legal system.”

Prime Minister Nikol Pashinyan’s “My Step” parliamentary faction has been working for some months to remove Tovmasyan who is widely seen as being in cahoots with the old Republican Party regime.

In May, Pashinyan outlined his stance on the issue of judicial reform, saying, “The Armenian people perceive the judiciary as a remnant of the former corrupt system (…).

The fact that the judicial power does not enjoy the people’s trust means that it is not sufficiently legitimate, which today is an outright threat to our country’s normal life, stability and national security.”

The PM added, “I abided by the principle of non-interference with the proceedings of the judiciary, and I have been committed to this sacred duty ever since. On the other hand, unfortunately, I cannot guarantee that the judicial system will not be exposed to shady and illegal influences, primarily by the former corrupt system because these two systems are bound by human, political and other ties.”

There has been a long lasting back and forth as the government doesn’t have the direct powers to simply remove judges.

Earlier, on October 17, the National Assembly had voted to remove Tovmasyan from his post, however the Constitutional Court refused to abide by that motion.

Only a few days later, the SIS announced it was launching an investigation into Tovmasyan.

Tovmasyan himself has also continuously stated he will not leave his post willingly. Nevertheless, it would seem that law enforcement authorities have started to take the investigation into Tovmasyan to the next stage.

In picture: Hrayr Tovmasyan’s birefing with reporters in front of the buidling of the Constitutional Court (Photolur)