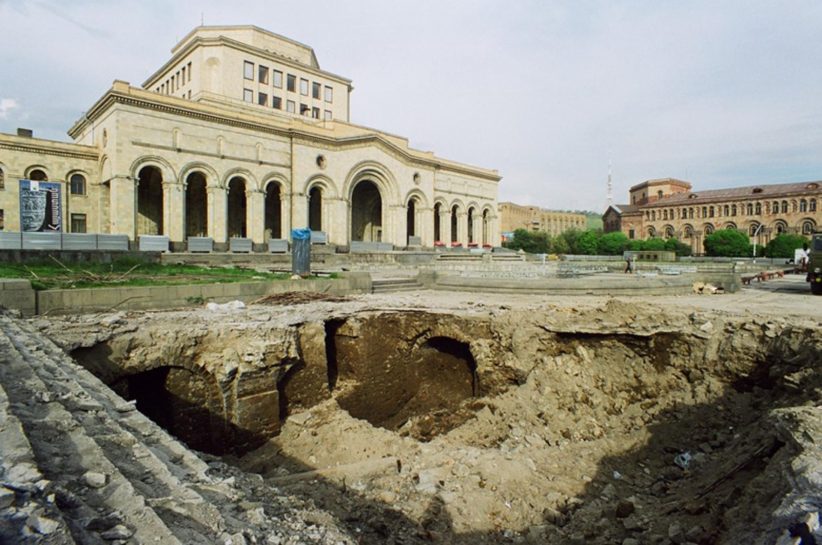 The first formal mention regarding the excavation of the old town underneath Yerevan’s Republic Square came in the form of a Facebook post by Arayik Harutyunyan, Armenia’s Minister of Education, Science, Culture and Sport on January 8.

Sure enough, there is an old town made of black and red tuff stone right under the Republic Square. It passing through Abovyan and Amiryan streets, reaching the old Kond neighborhood. In this area, archeologists found buildings that replicated the architecture of the ancient Armenian Urartu era.

“Studies reveal that the roofs of the buildings collapsed during the XVII century earthquake,” said Aghavni Jamkochyan, archaeologist at the Institute of Archeology and Ethnography of the National Academy of Sciences of Armenia. In the 17th century, Yerevan was a town inhabited by Armenians, but also Muslims from Turkic and Persian backgrounds.

According to the archeologist, the old town was covered in early 20th century, when the construction of the Republic Square, which was designed by architect Alexander Tamanian, started. “It remained hidden until 2003,” added Jamkochyan.

Jamkochyan was among the specialists who researched on the site when it was discovered in 2003 during the renovation of the Republic Square. According to her,4.5 meters high rooms were found, which were joined together by internal arches or doors. The foundation of the buildings were so strong that after the earthquake the landlords continued to live on non-demolished floors.

Armenia’s previous government decided to cover the discovery because, according to Jamchokyan, the state was not willing to spend money on archeological research. “The city was asphalted so that the next generations would uncover it,” says Babayan.

Armenia’s current government seems ready to reveal the treasure to the public and use the historical site as a tourist attraction. “As a result, Republic Square will become a much more scenic place,” stated Prime Minister Pashinyan on his Facebook page.

However, others are more skeptical about the opening of the site as a tourist attraction. For ethnographer Lusine Khalatyan, it is first necessary to lead in depth research about the diversity of cultures of Armenia and accept that heritage before opening the site to tourists.

“What I would do is to open this Pandora’s box and go deeper for us, as Yerevan residents, we should understand our heritage and really face our past and know what is our memory,” she told  CivilNet.