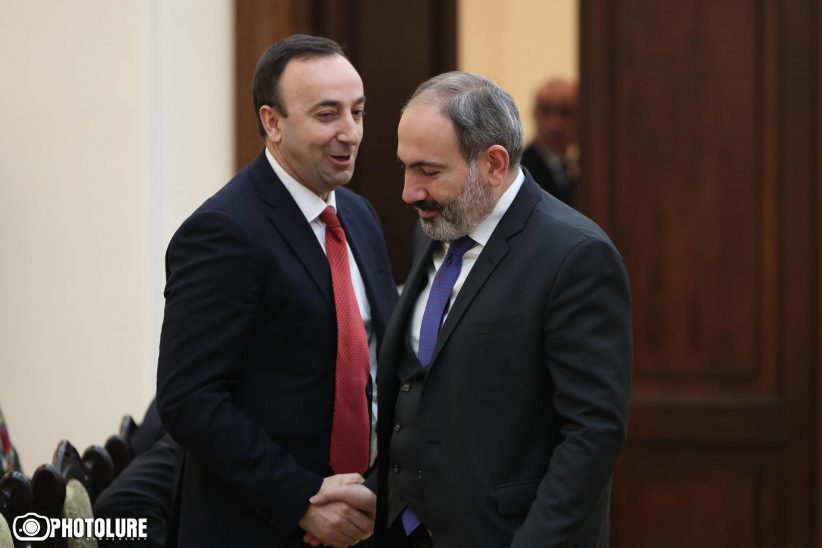 During a January 25 press conference in the city of Kapan, the capital of Armenia’s Syunik Province, Prime Minister Nikol Pashinyan said that Hrayr Tovmasyan, President of the country’s Constitutional Court, had offered to “provide services” for him and “collude” with him. Pashinyan has yet to specify the matters on which Tovmasyan offered to collude, nor has he provided evidence to back up his allegations.

During the same press conference, Pashinyan stated that, according to Armenia’s Constitution, the President of the Constitutional Court is to be elected from among the Court’s members by a vote among the members themselves, whereas Tovmasyan was “elected by the National Assembly…as a result of official forgery.”

Armenia’s judiciary is widely considered to be among the country’s most corrupt and least trusted state bodies. Pashinyan has repeatedly emphasized that judicial reform is among his administration’s top priorities, though relatively little has been achieved in this sphere since his coming to power in May 2018.

For some time now, Prime Minister Nikol Pashinyan and his My Step parliamentary faction have been working to discredit and remove Tovmasyan, who is widely seen as an ally of former President Serzh Sargsyan’s Republican Party, and an impediment to judicial reforms in the country.

Pashinyan insists that “the Constitutional Court is occupied by one person and one group,” ostensibly referring to Tovmasyan and his close ties with officials appointed during the previous administrations of former presidents Robert Kocharyan and Serzh Sargsyan.

On January 26, Pashinyan followed up on the previous day’s press conference with a post on his official Facebook page, claiming that Tovmasyan gifted him a pen in May 2018 that allegedly cost more than 500 euros. Though Pashinyan has suggested that this gift should serve as proof of Tovmasyan’s supposed corruption, he has failed to provide any further evidence in this regard.

In response, Tovmasyan called Pashinyan’s claims “absurd” and “slander” and called on the Prime Minister to “justify his words within 20 days” and provide evidence, otherwise threatening to sue for libel. On January 26, Tovmasyan’s lawyer, Amram Makinyan, posted a statement on his personal Facebook page to the same effect.

Tovmasyan has been at the center of a series of political scandals rocking Armenia since October 2019, when the country’s Special Investigative Service (SIS) opened a criminal case against him, former Speaker of the National Assembly Ara Babloyan, and former Deputy Chief of Staff of the National Assembly Arsen Babayan. Authorities are charging them with “abuse of power” during Tovmasyan’s election as President of the Constitutional Court in March 2018.

In light of this investigation, as well as Tovmasyan’s close ties with former President Robert Kocharyan, who is accused of attempting to “overthrow the constitutional order” and whose case is currently making its way through Armenia’s judiciary, the National Assembly voted in October 2019 in favor of an appeal to the Constitutional Court members to impeach Tovmasyan. The Constitutional Court refused to consider the legislature’s appeal.

Armenia’s Investigative Committee opened a second criminal investigation against Tovmasyan in December 2019 on charges of “abuse of office” committed during his five-year tenure as the country’s Ministry of Justice from 2010 to 2015. In connection with this investigation, Tovmasyan’s home was searched in January 2019, though the Constitutional Court head’s lawyers claim that no incriminating evidence was found during the search.