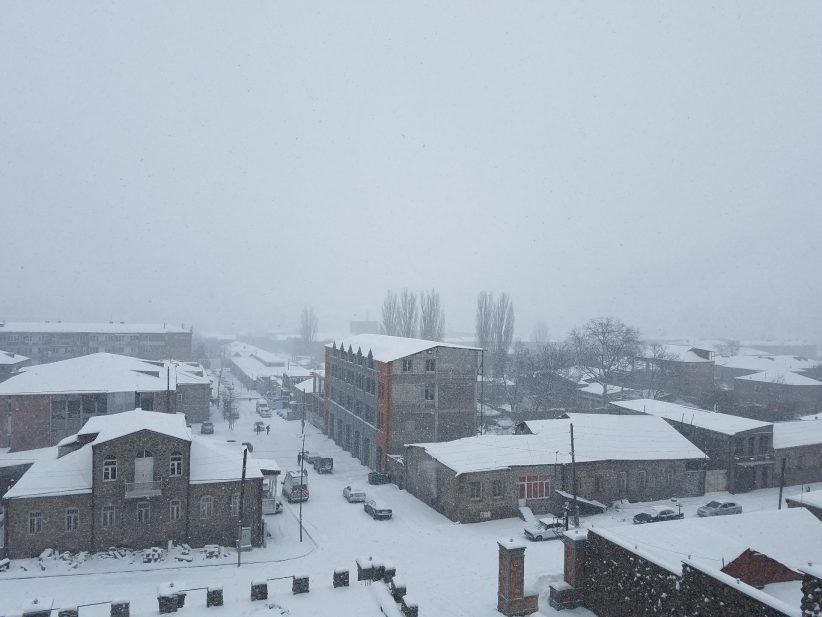 I had always known Goris to simply be the last major town on the road to Artsakh. Having never taken the opportunity to actually stop and explore the area, I was happy to find a town that was rich in history, culture, and hospitality. Sitting within the valley of the Goris river, it is the second largest city in Armenia’s Syunik Province.

We were given a tour of the town by Goris resident Artur Khojabaghyan, who helps run a 3D printing shop called AugmentAr. They specialize in building and selling 3D printers and parts. Hoping to expand the growing tech market to Goris, they also provide IT education and vocational training for children. Artur showed us around, pointing out the local building styles and recounting brief bits of the town’s history. Goris is best known for its stone pyramids of “Old Goris” and its medieval cave dwellings located in the surrounding mountains. We were shown one such cave by the local artist, Jirayr Martirosyan.

Jirayr had made this cave his favorite spot to paint from, to the point of fashioning a painting easel made from the surrounding tree branches tied together with a rope. “At first, I was frustrated for forgetting it at home, then I thought, ‘How did people paint before the invention of the modern easel?’” Drawing inspiration from the history of his home and family, Jirayr gave us a short tour of the local art gallery which included several of his works. “My father was a musician, which inspired me to include these instruments within my work.” His style of art resembles a form of modernism with cubism influences.

As night grew and the cold snow was building up, we were happy to find ourselves at our hotel settling in for dinner. The family style spread was a welcoming sight. We were soon joined by the hotel’s owner who was excited to host us and see more people traveling to Syunik.

In the south of Armenia, the region borders Iran to the south, Nakhichevan to the west and Artsakh to the east. Some of the more popular tourist sites in Syunik are the Tatev Monastery, the Wings of Tatev, which is the world’s largest mountain cable car, as well as Carahunge or Zorats Karer also referred to as “the Armenian Stonehenge,” near the town of Sisian.

Aside from these historical sites, Syunik is often frequented by campers and nature lovers. Eco Camping has also become popular in recent years in Armenia, and Syunik is no exception. The Kapan campsite, managed by ARK Ecocamp, promotes southern Armenia as a destination for environmentally conscious camping and the preservation of the natural landscape while also supporting the development of the  surrounding communities.

Our host wanted to emphasize the immense progress the region had experienced. He was optimistic that the continued development will attract more businesses and tourists to the area. I was inclined to agree, as the region, including Goris, has much to offer, not just with beautiful landscapes and rich history and culture, but also with enthusiasm and dedication from its people.