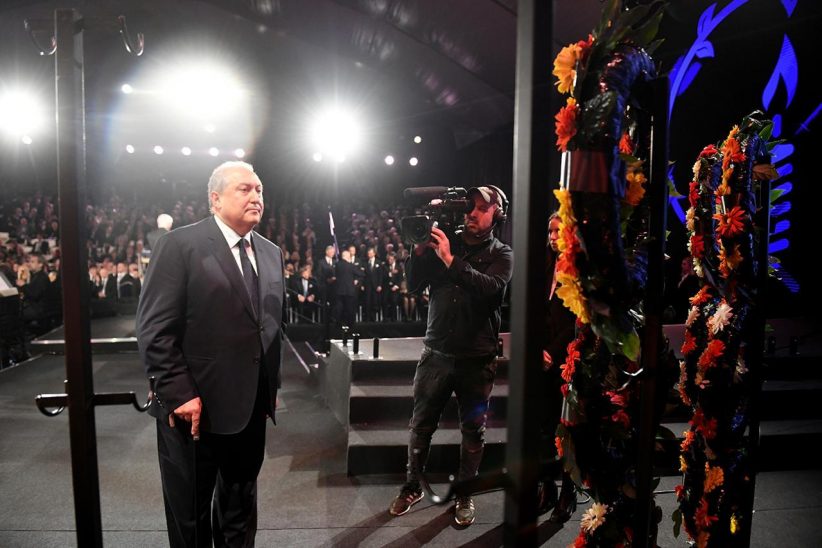 Armenian President Armen Sarkissian made his first working visit to Israel in late January 2020, as the two countries, which have historically had difficult relations, appear ready to improve and expand ties.

Sarkissian’s visit to Israel came as the country held the Fifth World Holocaust Forum at the Yad Vashem memorial in Jerusalem, timed to coincide with the 75-year anniversary of the Red Army’s liberation of the Auschwitz-Birkenau concentration camp. The forum was the largest diplomatic event in Israeli history, with delegations from nearly 50 countries and more than 40 heads of state in attendance.

On the sidelines of the forum, Sarkissian met with numerous high-ranking figures in the Israeli government. In a meeting with Israeli President Reuven Rivlin, Sarkissian underlined his desire to expand educational, cultural, and touristic ties between the two countries. Indeed, the Armenian government is slated to open an embassy in Tel Aviv later this year.

Later in his visit, Sarkissian met with Amiram Appelbaum, the President of the Israel Innovation Authority, a state body which operates under the country’s Ministry of Economy, to discuss strategies for the development of advanced science and technology research in Armenia and opportunities for Armenian-Israeli cooperation in this field.

Perhaps most significantly, Sarkissian urged the Israeli government in two separate instances during his visit to formally recognize the systematic killings of roughly 1.5 million Armenians in the Ottoman Empire in 1915 as genocide.

First, during a meeting at the Knesset, Israel’s unicameral legislature, with Speaker Yuli Edelstein, Sarkissian raised the issue, stating that “the recognition of the Armenian Genocide is, first of all, a moral responsibility” but also “an important contribution to international efforts aimed at preventing genocides and crimes against humanity.”

Later, Sarkissian again called on the Israeli government to formally recognize the Armenian Genocide in an interview with the Jerusalem Post, Israel’s largest English-language daily newspaper. In the interview, Sarkissian expressed his hopes that “human values, moral values, and the importance of history will prevail” over genocide denialism and warned that Israel’s refusal to recognize the Armenian Genocide hinders Israeli efforts to stem the tide of antisemitism and other forms of extremism worldwide.

Indeed, Israel’s refusal to formally recognize the Armenian Genocide is often cited as one of the major reasons that Israel and Armenia have had historically difficult relations. The Israeli government’s strategic relationship with Turkey and its ongoing arms sales to Azerbaijan are also often considered major hindrances to fostering Israeli-Armenian ties.

In an interview with CivilNet, Suren Manukyan, Chair of the Department of Genocide Studies at Yerevan State University, commented on Sarkissian’s calls for Israel to formally recognize the Armenian Genocide, noting that “the Armenian Genocide is not just part of Armenian history, but part of the history of humanity.” According to Manukyan, the timing and location of Sarkissian’s message signals that the Armenian government wishes to play a frontline role in combating ongoing genocides and other crimes against humanity worldwide.

Finally, in addition to his numerous meetings with Israeli officials, Sarkissian also met with representatives of the Armenian Apostolic Church and the Palestinian National Authority during his visit.

Echoing the theme of his church visits, Sarkissian raised the issue of Armenian religious sites during a meeting with Mahmoud Abbas, President of the Palestinian National Authority, thanking him for his “assistance in the preservation of the Armenian spiritual and historical heritage” located under his authority.