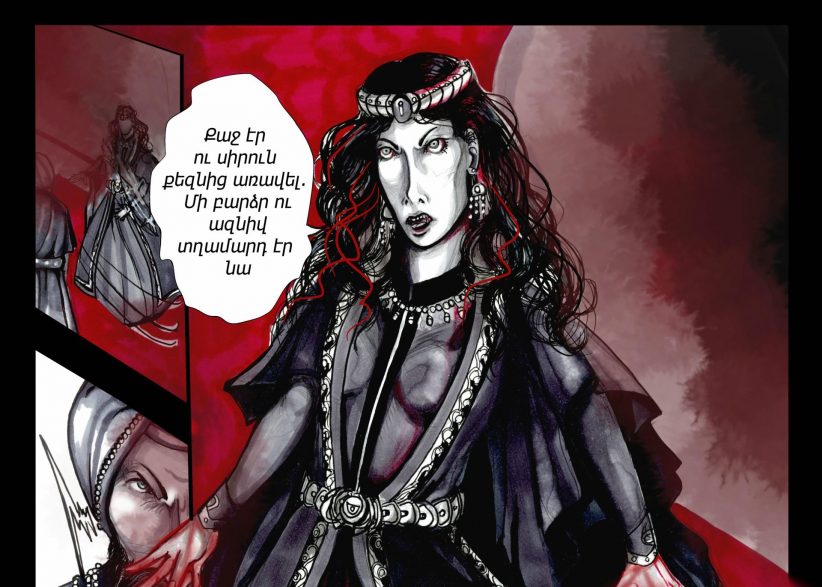 In Armenian bookstores, more and more pictures are popping out of storybook pages to introduce readers to the blooming  culture of “talking images.” Instead of simply accompanying the story, the images are telling the story in a new visual language. This is the language of graphic novels and comic books.

In 1993, American cartoonist Scott McCloud published “Understanding Comics: The Invisible Art,” which was the first book exploring the theoretical ideas, definitions, methods and history of comics, and expounded comics as an art form. It was written as a graphic novel and stressed the artistic values of this new style.

Since then, graphic novels and comics have seen a steady rise in popularity. With annual festivals in Angoulême bringing in more than 200,000 visitors. According to NPD Bookscan, from 2016 to 2019, the United States book market has experienced an annual sales growth of 15% for the comics and graphic novels category, making it one of the biggest growth categories in the book market.

Although the Japanese manga and American marvel comics enjoyed the attention of young Armenians for years, Armenian publications in this style are a newer development. As the artist Tigran Mangassrian mentions, local graphic novelists and cartoonists have worked in the genre since the Soviet years, but this was mainly for private organizations or newsletters as publishing houses rarely took the risk of publishing an Armenian graphic novel or comic. This is beginning to change.

Armenia is about to open its own association of graphic novelists, according to Mangassarian. “This will be a new way of gathering all our artists together and showing all their works in one platform,” he said.

Kristina Avanyan is one of the artists who uses this format in Armenia. She is a student in the Russian-Armenian University of Armenia who created a manga-style novel of Hovhannes Tumanyan’s “The Capture of Fort Tmuk.”

“Working on the design of the characters was a little unusual for me in the sense that these characters had a strong bond with Armenian and Persian cultures,” she said. “This required me to deeply study national costumes.”

“The Capture of For Tmuk” is one of the most iconic pieces of Armenian literature, and the visualisation of it in the form of a graphic novel made it even more appealing for the youth. As Avanyan said,  the pictures in the story added new details and the characters received new symbols and new abilities even though the plot remains unchanged. But most of the times these symbols go unnoticed.

“The biggest problem of the Armenian public is that they are not used to reading images. They look at the picture, but for them this picture rests as a decoration, which means merely an illustration for the text,” Avanyan said.

An example of this is Tigran Mangasarian’s graphic novel, titled “Zako,” in which half of the story is told by images. “Zako” is a non-fictional story about  Mangasarian’s father, his life during the war and his struggles as an artist. The reader roams through the pages of the story, where the real pictures get mixed with drawings along with Mangasarian’s  own sketches of the book.

“If I add a little more text to the novel, this will become the first Armenian synthetic novel, because it mixes all the materials together to tell the story,” he said.This is the principle that Mangasarian  works with currently — to use whatever material is best for good storytelling.

“Sometimes, instead of saying hundreds of words or drawing characters, the reader needs to see the documented evidence,” he said. Mnagasarian also uses cartoons to portray brutal moments and stories, as he did in his graphic novel on the Armenian Genocide.

“Sometimes you really cannot tell these stories in any other form, because the text would be too hard to read and the picture would be too bitter,” he said.Same goes for different social issues, such as sexual abuse or domestic violence that Mangasarian works on.

With this symbiotic dance between images and texts, graphic novels and comic books might eventually revitalize the old tradition of reading with visuals.