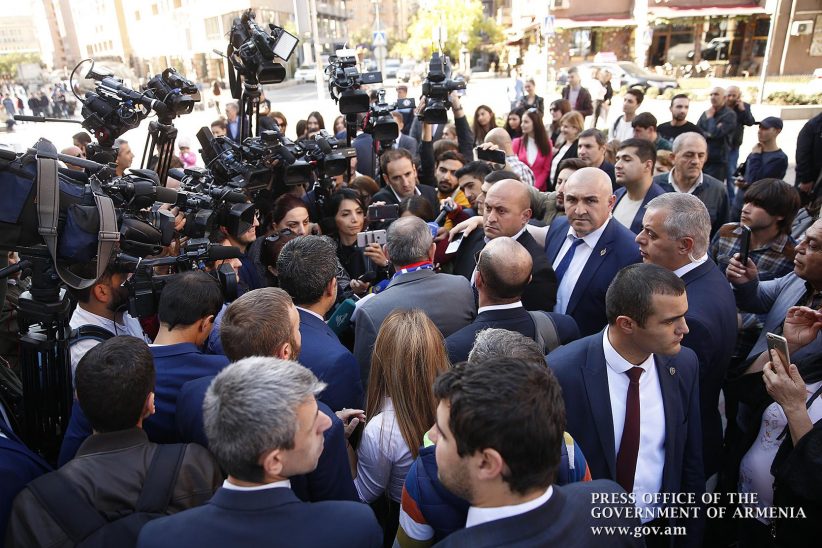 Armenia’s top officials, including Prime Minister Nikol Pashinyan and Secretary of the Security Council Armen Grigoryan, have recently spoken of a hybrid coup in Armenia. Lilit Gevorgyan, Senior Analyst at Global Insight in London, speaks to CivilNet’s Stella Mehrabekyan about these issues, the information war, and reforms in the country.

– In an interview with CivilNet a few months ago, you provided a detailed overview of the hybrid war in Armenia, talking about its information component. At that time, the term did not seem to have been widely circulated. In recent weeks, Armenia’s top officials, including the prime minister and the Secretary of the Security Council, have repeatedly stated that there has been a “hybrid coup” and “hybrid preparations” in Armenia. Do you think that what is happening in Armenia really fits into that logic?

– In my previous interview, I tried to describe just that – information war or campaigns are only a small part of the so-called hybrid or non-conventional war. he word “war” is what’s most important here because these are operations equivalent to military ones and they pursue a specific objective. A coup could have been one of those objectives. Of course, there are a variety of means for achieving those goals. It’s not just spreading messages on social networks, through fake Facebook accounts, or spreading misinformation through the media controlled or owned by the former regime. I do not have any information about the said attempted coup, but I can say that the misinformation and the hybrid information warfare in Armenia not only have not disappeared, but I have further intensified recently.

– What should be done to contain this issue given its negative impact on the public?

– When it comes to intensification, there are several components here. I have noticed that some of these groups on the frontline of hybrid warfare have even organized meetings with foreign diplomats, including with Iranian representatives. That is just one example. The problem is the following. There is a need for more  thorough analysis of the very concept of non-conventional war. What are its internal and external components? Who are the internal players and their external sponsors. And in this context the government needs to make tactical steps. These can start with exposing the network engaged in hybrid war, including not only the media sources, but also the political parties, politicians, oligarchs, in short, the entire network that serves this campaign.

It appears the current authorities are avoiding or unwilling to do this, perhaps because they are concerned about foreign policy implications, in particular, the potential strings that stretch to Russia. After all, such a campaign is a military-grade operation, designed to erode the social fabric of the country, and fracture its political landscape. I would like to highlight another point here. Those waging a hybrid war do not exclusively target the government of Nikol Pashinyan. They also target the country’s real, constructive opposition, to prevent them from strengthening and ultimately replacing the current government. Disruption and disinformation campaigns, and institutions involved in the hybrid war are rooting themselves deeper in Armenia now, therefore they will pose a long-term risk for the country in the years to come.

– There have been several cases in the recent past where the National Security Service uncovered fake accounts and arrested the people behind them. This has caused a mixed reaction among many. Some have viewed it as a violation of freedom of speech and so on. Would you agree with the critics?

– There is no strategic approach to the problem, meaning, the authorities have not explained the context of these arrests. Once again, there is a lack of  strategic communication- the authorities need to explain how a hybrid war operation works, who are behind these operations, how they harm the public and pose national security threat, expose all the components of these operations. These will then explain the measures the state is taking guided by its national security concerns.

The bigger problem is the lack of systematic approach by the government to the hybrid war threat. There is a lack of effort to expose the linkages in these coordinated campaigns, identify the oligarchy’s role in it, map the funding  channels behind these groups, media resources, or expose the subversive narratives and their goals. As said earlier these subversive actions are not only targeting the current government, but they pose a threat to Armenia’s national security and  Armenia’s interests. Therefore, I find it short-sighted that the government believes these actions are targeting only them or some of their team members.

– When it comes to the overall reform process in Armenia, you also talked about strategic communication. The authorities have envisaged a number of reforms in a number of areas, which have caused mixed reactions in society. There are complaints, protests, and at least concerns. How do you evaluate the overall process? Is resistance also a logical and to some extent expected response, or are there mistakes made when carrying these reforms, for example, how they are designed and presented to the public?

– There are two aspects to this. A positive and a negative one. Firstly, it is encouraging to see that Armenia’s political life is truly transforming with direct citizen participation, despite the disinformation and distortion campaign carried out by a large part of the media. Citizens’ publicly expressed complaints, protests, and strong opinions are, after all, part of the political process that will become more institutionalized over the years, as  different interest groups emerge. Currently various sectoral changes and related protests have not led to creation of unions or lobbying groups, but they appear to be in their embryonic state. These types of protests are prevalent in advanced democracies, I can bring France as the most recent example, as the country is seeing mass protests for several months now.

On the flipside, the government has several shortcomings due to its revolutionary nature.   More specifically, these shortcomings are related to the need to hobble together a post-revolutionary government, and enlarge quickly the membership of the ruling party in a very short period of time when the old regime was toppled. In addition, the new authorities had to deal with both internal and external fire fighting. This left little room for setting procedure for properly communicating with the public, real opposition forces and key stakeholders. A  If the government’s strategic communication doesn’t develop, sharp reactions to their initiatives are expected to continue.

At the same time, not forgetting the on-going hybrid war, the government needs to avoid being sucked into their widely practiced tactic of little scandals. The government needs to give more voice to the healthy opposition. I believe the Pashinyan government and his party need to support and strengthen the real opposition in every possible way. Otherwise, this government could further become drawn into the hybrid war, leading to both domestic and foreign policy failures, as these two are closely interconnected. Afterall, hybrid war is not just a domestic political problem.

– In one of your interviews, you mentioned, “The revolution can be defeated, if it has no vision of how the changes will take place, it can lose because of the influence of external players.” Do these dangers still exist in Armenia today?

– Yes, they do. And the problems that we just discussed underpin these risks. Not only the government needs to have a clear vision for the reforms but also a roadmap for achieving these changes. After all, the revolution in Armenia took place not because one person, Serzh Sargsyan, chose to stay in power, but because the oligarchy  and foreign policy failures led the country into a national security crisis. Armenia was embroiled both in economic and national security crisis, and it has yet to take firmer steps to walk away from the edge. In this regard, it is critical to have a clear set of actions explaining how the oligarchy will be abolished.

To this end, firstly, the government must admit that the oligarchy is well and alive. The second issue is the one of rebalancing relations with Russia. Rapid reform of law enforcement and judiciary is a critical task. These are the structures where many of its members have benefited from the former regimes. Seeing an absence of a robust reform policies for these sectors, and the weakness of the real opposition, many members of law enforcement and judiciary are putting up silent resistance to changes, thinking that if they hang in there for a couple of years, then the old regime will regroup and with the help of external players will have time to create new quasi-political parties, forge alliances, find fresh faces to serve as a façade and ultimately re-capture the power.

And finally, this brings us to another imperative: giving a full political verdict to the old regimes. This will explain the mechanisms used by the old regimes in capturing power in Armenia, assess its impact in terms of human, military, economic and other losses the country suffered as a result in the past decades. This will help separating the emerging fake opposition, currently being put together by the former regime, from the genuine opposition. I’d emphasize again that apart from the reforms drive, the revolutionaries also have the challenging of creating a new political landscape where support for real opposition will be critical.

– I do not have enough information to assess the progress of these reforms. At the same time, given the current government’s working style, and weakness in their strategic communication, I am not sure about the scope and the nature of those reforms. These, however, will be the most painful and difficult reforms to carry out.

It has to be said that the government realistically cannot change the judiciary and the law enforcement agencies overnight. This particularly applies to the National Security Service. These tough reforms are perhaps even beyond the government’s powers and ability. These are extraordinary measures aimed at building new and robust state institutions and would require an input from all segments of the society. It is worth remembering that Armenia did not simply change its government through elections. People demand a complete overhaul of ill-functioning institutions and the political system. In this regard, Armenia is in a difficult position. State institutions need to be re-created, cleansed of corruption and streamlined in the coming years. This is a tall task for a government or a small political team without help from the rest of the society.