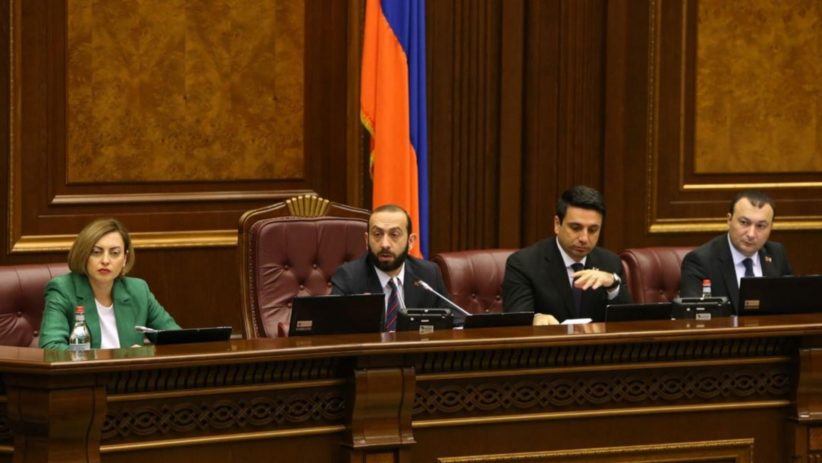 On April 5, Armenia will hold a referendum on suspending a majority of members of the Constitutional Court.

A resolution calling for the dismissal of 7 of the 9 judges of the Constitutional Court through referendum was approved by President Armen Sarkissian, after being passed by the National Assembly on February 6.

The constitutional amendments would suspend the powers of the judges who were appointed under former governments. The court’s two other judges, who were appointed by current Prime Minister Nikol Pashinyan after the Armenian Velvet Revolution of Spring 2018, will maintain their positions.

For some time now, Prime Minister Nikol Pashinyan and his My Step parliamentary faction have been working to discredit and remove Constitutional Court President Hrayr Tovmasyan, who is widely seen as an ally of former President Serzh Sargsyan’s Republican Party, and an impediment to judicial reforms in the country.

Pashinyan insists that “the Constitutional Court is occupied by one person and one group,” referring to Tovmasyan and his close ties with officials appointed during the previous administrations.

In addition to his ongoing feud with Pashinyan, Tovmasyan is the subject of two ongoing criminal investigations. In the first case, Armenia’s Special Investigative Service has charged Tovmasyan and several other officials with “abuse of power” during his election as President of the Constitutional Court in March 2018. The second investigation, headed by Armenia’s Investigative Committee, alleges that Tovmasyan committed “abuse of office” during his term as the country’s Minister of Justice from 2010 to 2015.

Edmon Marukyan, leader of the opposition Bright Armenia Party, spoke out against this decision.

“No one can declare a citizen of the Republic of Armenia, a man with a blue passport, an anti-government force of the nation. No one is going to try to make a Politburo here,” he said. According to Marukyan, the Constitutional Court should have judges who serve different terms and are appointed by different authorities. The opposition leader is convinced that this is not an option that would be approved by the public and added that My Step’s approach is leading Armenia down a dangerous path.

Co-rapporteurs of the Parliamentary Assembly of the Council of Europe for the monitoring of Armenia, Andrej Šircelj (Slovenia, EPP/CD) and Kimmo Kiljunen (Finland, SOC) called on the Armenian authorities to request as soon as possible, the opinion of the Venice Commission, the Council of Europe’s expert body on constitutional law. “We believe that this opinion, which could be adopted very quickly via an urgent procedure, would be valuable to all stakeholders, including the Armenian electorate if a referendum were to be held,” they said.

In order for the constitutional amendment to be approved by referendum, a simple majority in favour (50%+1) of those participating in the referendum is needed. If any ballots are left blank or have an unidentifiable marking, they will count as a “No” vote. The total number of votes in favor must be higher than a minimum threshold of 25 percent of all 2,6 million eligible voters. Thus, in order for the constitutional amendments to be accepted, about 650,000 people must vote in favor.