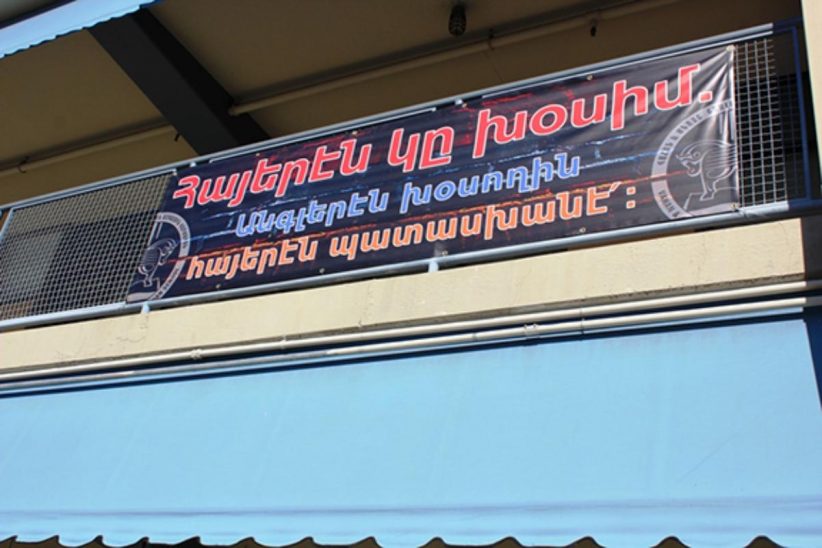 The article was originally published on Al-monitor.com

His most recent album sung in Homshetsi can be taken as an SOS call, says Hikmet Akcicek. The tongue, a northwestern dialect of Western Armenian, is one of 15 endangered languages spoken in Turkey — and Akcicek’s band Vova means to keep it alive.

The cover of the band’s July record, “Garmi Doc” (“Red Truck” in Homshetsi), shows a woman in red traditional clothing. For Akcicek, it’s a chance to showcase his culture and mother tongue, spoken in the mountainous northeastern Black Sea region of Turkey, and becoming extinct for a combination of reasons.

“Every kid born in Hopa [a town in Artvin province in the northeastern Black Sea region] would first learn Homshetsi, use it in daily life and marry a fellow Homshetsi. Now, kids learn Turkish first thing, and their daily lives are dominated by Turkish,” Akcicek told Al-Monitor.

He added that since the 1980s, many of the Homshetsi (or Hemshin) people from the coastline along Rize’s Ikizdere county up to the Georgian border — have moved to big cities. For various reasons, many of them have migrated from the region to other Turkish provinces such as Sakarya and Erzurum or abroad to Russia, Abkhazia, Kyrgyzstan and Kazakhstan. Akcicek said, “Like many local languages, Homshetsi and its culture are fading.”

Akcicek explained, “Vova is a project with a mission to compile, record and carry forward the hymns of a culture and a language to present and future generations rather than [simply] produce albums or play on stage.”

The band debuted 14 years ago with its 2005 “Homshetsi Hymns.” Its soft sounds are marked by the emotional Homshetsi shepherd’s pipe and the blaring Black Sea bagpipe (also an instrument of the Laz), the album evokes nostalgia for the mountains. Unlike the first album, Akcicek said this one includes songs not only from Hopa but also from Rize’s Cayeli province and from Abkhazia’s Homshetsi.

Not all Homshetsis speak their heritage tongue, and some debate whether Homshetsi is of Armenian or Turkish origin. Although their tongue is a dialect of Armenian, Homshetsi people living in Turkey consider themselves Turks and practice Islam, he said.

The Homsheti culture is known for prints of livestock herding and traditions involving dairy production and trade, a high-altitude nomadic lifestyle and an equal distribution of work between the genders, Homshetsi is believed to have survived into modern Turkey thanks to the speakers’ relative geographical isolation on the outskirts of the Kackar Mountains and on the plateaus, some at 3,000 kilometers above sea level, songs such as those recorded by Vova have been sung for centuries.

Though the Homshetsi migration trail, Ince Xarxan, is still there, winding narrow through the green uplands of Artvin’s Borcka region, hardly anyone migrates on foot anymore, or at all. A traditional song for the seasonal pilgrimage is included in Vova’s new album, but the time when the pipe was played along fully loaded horses and donkeys by young and old Homshetsis alike is now past. Yet technology and globalization are not the only reasons, Akcicek said.

“The disappearance of the Homshetsi has gained speed particularly due to government-imposed assimilation policies, and especially since the proliferation of urbanization and mass communication technologies since the 1980s,” Akcicek explained. In the days of his youth, his mother tongue was alive in the household, but that’s not the case anymore.

“I am educated, I live in Istanbul, my wife is not of Homshetsi origin and my children do not speak Homshetsi,” Akcicek said. They all speak Turkish, Turkey’s official language.

Until the 21st century, local tongues such as Homshetsi, Laz, Pontic Greek, Syriac and Kurdish were banned in state schools. According to countless testimonies, children were educated in Turkish and expected to speak only it as the country’s official language. Since 2012, some local tongues such as Adyghe, Kurdish and Laz have been offered as elective courses in public schools in various regions. But not Homshetsi.

Today, it’s uncertain how many Homshetsi speakers there are in Turkey, but it is widely understood that the tongue may not be around three decades from now, when the fluent elderly generation is gone.

For those who still read it or wish to learn, the biannual magazine GOR, started in 2014, is a pioneering bilingual publication that keeps a record of Homshetsi culture in Homshetsi as well as in Turkish as part of the efforts to bring literature and Homshetsi together.

On that front, the first children’s book to be translated into Homshetsi was published in 2016. Mahir Ozkan, a publisher and a philosophy teacher from Hopa living in Istanbul, worked on the “Little Prince” to help protect his mother tongue. The book remains the world’s most translated non-religious text.

Aysenur Kolivar is a niche folk musician who sings in the various tongues of Turkey’s northeastern Black Sea region and an instructor at Sabanci University with expertise in dialectology. She told Al-Monitor that she considers languages universal heritage. Her project “Heyamoli: Children’s Songs in Black Sea Languages” aims to introduce Homshetsi and other local tongues to new generations and remove them from UNESCO’s World Atlas of Languages in Danger.

“Our primary objective with our children’s music album project was to raise awareness among children aged 2-12 that their mother languages are just as valuable as other languages of the world,” she said. Recognizing the importance of music to transfer cultural values and information to young people, Kolivar said this project is a reflection of her faith that Homshetsi and other local languages will survive.

The threat Homshetsi faces today is not unique in our new global village. Out of some 6,700 languages spoken around the world today, a third have less than 1,000 speakers, The Economist reported. More than 40% of those languages are facing the threat of extinction, according to UNESCO, and two languages are lost each month. Although Columbia University’s John McWhorter predicts that 90% of languages worldwide will become extinct by 2115 due to globalization, activists wanting to preserve the Homshetsi tongue and culture still hope for another, more diverse and colorful world and work to promote coexistence.

“May our hymns be the sun for our days,” reads the introductory text for Vova’s album. “May they be played and sung wherever there lies a breath.”