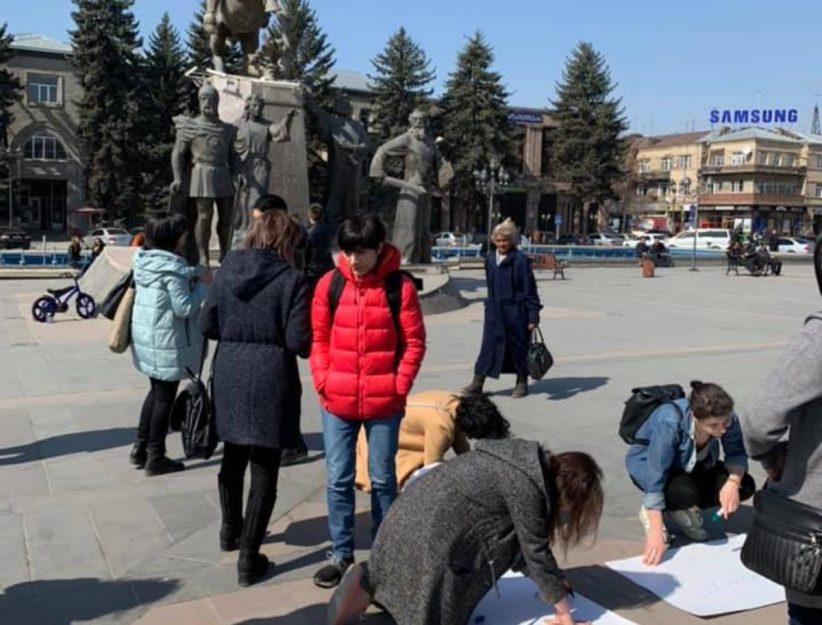 On March 9, a protest march opposing violence against women was held, starting from Gyumri’s Vardanants Square, after a brutal murder and beating took place against two women a few days prior.

Members of the “Violence Against Women” coalition and a group of activists from Gyumri, Yerevan, Spitak and Talin took part in the protest.

On Friday 6, a man was arrested in Gyumri under suspicion of beating a 13 year-old girl and murdering her 43 year-old mother.

The 28 year-old man called emergency services eight hours after the beating, by which time the mother was deceased, according to the prosecutor.

The 13-year old girl was taken to Gyumri Medical Center where she received urgent medical attention.

The protest was led and attended mostly by women. Moreover, the marchers protested outside the Prosecutor’s Office, as well as the house of the 43-year-old woman, called “Marine,” where the murder took place.

One of the activists and organizers, Anna Nikoghosyan, stated that the marchers had decided to take their protest to the Prosecutor’s Office to show that they are following the case.

Furthermore, Nikoghosyan said that often prosecutors, judges and other individuals have attempted in the past to justify the murder and not accept the gravity of the issue of femicide.

The girl has now been transported to the intensive care unit of the Surb Astvatsamayr Medical Center in Yerevan. She is still unconscious but according to the medial establishment’s Facebook page, she is able to speak a few words. Moreover, she is now breathing by herself and the ventilator she was using to breathe has been removed.

Yesterday, Prime Minister Nikol Pashinyan and Minister of Health Arsen Torosyan visited the girl, identified as Nazeli Khachatryan, who had received surgery due to her injuries and numerous fractures.

Pashinyan said about the case, “We are saddened by the news, but let’s admit that this girl and her mother were also victims of the opinion that violence against women can be justified.”

Nikoghosyan told CivilNet that the protestors “Are sick and tired of the situation regarding femicide in Armenia.”

“Every month we hear about these cases, where women are killed by spouses, ex-husbands, relatives, or any other male. We will continue to fight to eliminate the culture of violence against women,” said Nikoghosyan.

Read more: Mother and Daughter Severely Beaten in Gyumri, the Mother has Died