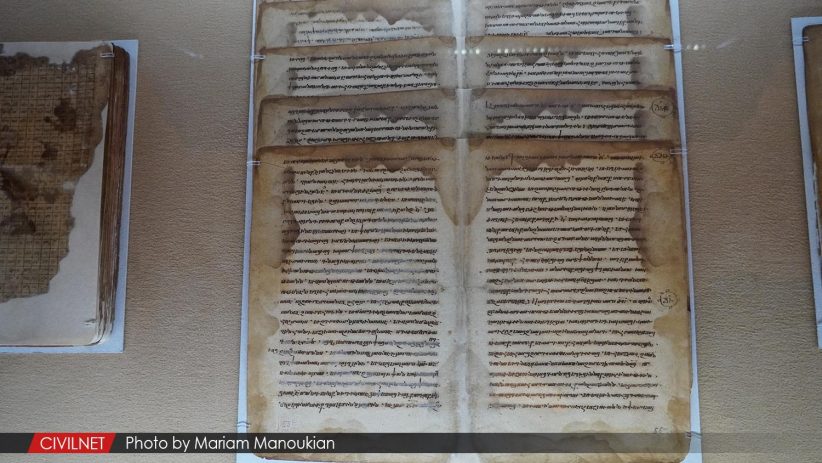 It’s hard to imagine that thousands of years ago a book written on thin paper and in simple script would be considered one of the most precious items in Yerevan’s Mesrop Mashtots Institute of Ancient Manuscripts, also known as Matenadaran.

Written in 981, and decoded this year, Matenadaran provides the public with its 2679th handwritten manuscript, the first Armenian manuscript. The manuscript is written in bolorgir,a type of cursive which back then was considered a less prestigious writing style compared to uncial letters commonly used to copy the Holy Scriptures. Bolorgir was considered a simpler version that was used mainly by non-clerics.

Today, bolorgir is the most prevalent script in Armenia, chosen as the main type for printing, and the manuscript provides us with one of the most ancient handwritten examples of this script.  Two collections are included in the exhibition, the compiler of the works was David the Priest and the scribe was his son Ghukas.

“The manuscript is unique in the sense that it has a vast collection of secular works, where one can find scientific or historical materials rather than just religious,” explains Davit Ghazaryan, one of the decoders of the manuscript. The manuscript includes 62 pieces from Armenian and foreign authors translated into Armenian.

Artur Petrosyan, the senior manuscript restorer, says, “The process of restoring the manuscript was very difficult as the ink used to write the manuscript had been damaging the paper.”

The team decided to use a specific substance that would prevent further destruction and at the same time would recover the already damaged parts.

Consisting of more than 361 pieces, the manuscript is divided into two parts. The first one includes more historical and scientific material, while the second part has a combination of historical and theological texts.

The manuscript has been kept in Matenadaran’s Restoration Department for the last two years in order to properly restore the parchments, remove dust and disinfect the material. Significant amounts of work has been done to preserve all the letters and particles of the original script to prevent future damage.

The parchments of the manuscript will later be sewed together and a cover will be added in order to regain the original appearance and preserve its style as a handwritten work.