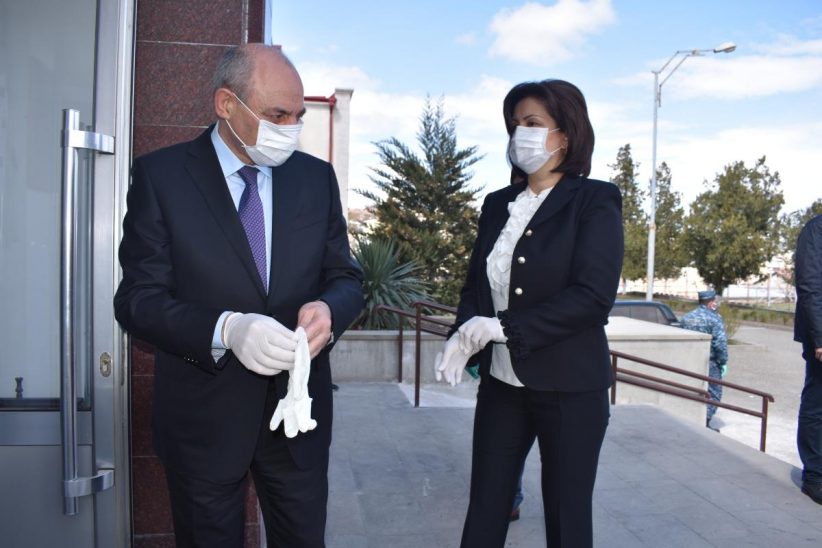 On March 31 presidential and parliamentary elections were held in Nagorno Karabakh. None of the 14 candidates running for president passed the 50% threshold. Former Prime Minister Arayik Harutyunyan received 49.3% of the votes, while Foreign Minister Masis Mayilyan got 26.4%. Karabakh hero and army general Vitaly Balasanyan, who was supported by former Armenian Presidents Robert Kocharyan and Serzh Sargsyan, came third with 14.7%. Five parties entered the 33-seat parliament, with Arayik Harutyunyan’s Free Motherland having the most – 16 mandates.

Emil Sanamyan, editor of the USC Institute of Armenian Studies Focus on Karabakh platform and expert on South Caucasus talked with CivilNet’s Karen Harutyunyan about the political developments in Nagorno Karabakh.

KAREN HARUTYUNYAN: There were varying assessments about the presidential and parliamentary elections in Karabakh. Some Armenian observers (who had received Armenian government funding for monitoring work) reported a number of violations. Meanwhile, Armenia’s Prime Minister Nikol Pashinyan praised the quality and outcome of elections stressing the fact that not a single party won by a landslide, “which is proof of democracy,” he said. What is your observation of the conduct of these elections?

EMIL SANAMYAN: If the fact that there was no landslide is an indication of democracy, then Armenia has been democratic since 1998, since neither Robert Kocharyan nor Serzh Sargsyan nor the Republican Party ever won by a landslide. Incidentally, unlike the current ruling party in Armenia. I doubt that Nikol Pashinyan would use the same measure to assess Armenia’s elections.

What is true is that a competitive political environment is a necessary precondition for a healthy democracy. In that sense, the fact that the 2020 election was the most competitive republic-wide election ever held in Artsakh is certainly a step forward for democracy, but not an indication of an established democracy, let alone an irreversible one.

It is also a fact that just as in elections in the Republic of Armenia or anywhere, there are citizens of Artsakh who were hoping for a more substantial change in how Artsakh is governed and who supported non-winning candidates and who are disappointed with the outcome and are also disappointed with Pashinyan’s position.

– Even though Armenia’s Government had claimed that it would not support any of the candidates or parties, there was a noticeable “positive neutrality” towards NK former Prime Minister Arayik Harutyunyan. Moreover, certain circles in Armenia’s elite assisted Harutyunyan, who was also being supported by the outgoing president of Karabakh. In your opinion, was Arayik Harutyunyan “the best option” for Pashinyan? Why didn’t Pashinyan put his cards on the foreign minister, Masis Mayilyan, who has, among other things, an NGO background and, seemingly, whose mindset and values are closer to the revolutionary guys in Yerevan?

– I agree with Tatul Hakobyan’s point in his recent op-ed that Harutyunyan was more successful at lobbying in Yerevan. I see several reasons for that. The political reality of Harutyunyan being able to mobilize his supporters and to bring them to Pashinyan’s rallies in Yerevan in August 2018 or in Stepanakert a year later I think was a real factor. Mayilian could not do anything similar, particularly while in the position of foreign minister. Another argument could be that Pashinyan did not want to lean too publicly in favor of one candidate over another and that left Harutyunyan a favorite over Mayilian. In fact, this is also what happened in local elections — in Kapan in 2018 or last year in Stepanakert. Finally, Harutyunyan has shown greater ability to work with Armenia’s political figures, himself being more of an administrator than a politician. In that sense Pashinyan’s choice in favor of Harutyunyan is not dissimilar to Serzh Sargsyan favoring Bako Sahakyan over Masis Mayilian back in 2007.

– No, I think Mayilian had his own ambitions and election results showed that he was in the best position to lead the pro-reform constituency in Artsakh. Another thing is that he was unable to assemble a broad coalition to successfully challenge Harutyunyan. Balasanyan had similar and even more obvious problems in that sense.

If Mayilian were not in this race for whatever reason, Harutyunyan would have most likely won with a larger margin.

– Now it is certain that Arayik Harutyunyan will be Karabakh’s next president. However, it is still unclear how he will form a government since his party only won 16 seats in the 33-member National Assembly. Who do you think he will partner with to form the government?

– I see little intrigue in that sense. With  two long-standing partners of Harutyunyan’s party represented in parliament — Ashot Ghulyan’s party and the ARF-Dashnaktsutyun — the likely new president will have majority support in parliament, at least 21 seats of the 33. Harutyunyan has also indicated that he might reach out to his main election opponents. He has options.

– What about Samvel Babayan whose party won nine seats in parliament? And this seems his first successful attempt in politics after he was released from jail in 2004. All his previous efforts had failed – his Alliance party had not overcome the threshold in Armenia’s 2007 parliamentary elections, his advent after the 2016 April war and political ambition in Karabakh also got him another year in jail. What is Babayan’s ambition in politics now?

– I would note that this is actually a second successful political campaign for Samvel Babayan. Back in 1999, when he was still NKR’s defense minister, Babayan actively supported the Right and Unity Bloc (Artashes Geghamyan / Hrant Khachatryan) that came third in Armenia’s parliamentary elections.

This election has confirmed Babayan as the main alternative to Arayik Harutyunyan, notably that it was his party that made it into parliament rather than the New Artsakh bloc affiliated with Mayilian. Babayan will also have a larger faction than Vitaly Balasanyan, although Balasanyan came in third in the presidential race..

If we draw a parallel with Yerevan, Babayan is in a position similar to that of former president Levon Ter-Petrossian in Armenia before 2007 when, formally, the opposition was led by other figures while Ter-Petrossian had no formal role. We’ll see to what extent Babayan will be comfortable with this informal role and for how long. There was a risk that as with Ter-Petrossian’s return in 2008, Babayan’s return this year could lead to some clashes with Harutyunyan’s supporters. After all, there had been small-scale altercations between their supporters in 2019, and Babayan sounded firm about stopping Harutyunyan’s candidacy. So it is probably one of this election’s major achievements that they did not clash.

Because of this, I think some sort of coalition arrangement between Babayan and Harutyunyan should not be ruled out for the future, particularly in case of a possible increase in tensions with Azerbaijan. And there is precedent for that — Bako Sahakyan brought his former election challengers Balasanyan and Mayilian into his government after the war of April 2016.

– Many observers viewed these elections in the context of NK being a “last bastion” for Armenia’s former presidents Serzh Sargsyan and Robert Kocharyan. In your opinion, what will Kocharyan and Sargsyan do now (the latter still having a huge informal influence in NK)?

– I think Balasanyan’s lackluster performance, in spite of fairly robust support from Sargsyan and especially Kocharyan, shows that a majority of Artsakh voters are not easily swayed by the influence of either of the ex-presidents. In fact, if we compare the outcome of Armenia’s 2018 elections with Artsakh’s in 2020, the former ruling party in Armenia, the Republican Party together with the ARF – the forces in opposition to Pashinyan’s government — combined had over 100,000 votes.  In that sense Kocharyan’s and Sargsyan’s support bases will remain where they continue to reside, in the Republic of Armenia, and their future political performance will be directly dependent on the successes and failures of Nikol Pashinyan’s government.

– There were numerous calls in NK and Armenia to postpone elections because of the risk of the Coronavirus epidemic spreading. The elections were not postponed and speculation continues over who gained from this? What about the second round when there are already people in Artsakh who have tested positive, since the elections?

– It is my conviction that it was wrong to hold the March 31 vote considering the emergency declared in Armenia and international shutdown over Covid-19. It would have made all the sense in the world to postpone the vote by 2-3 months. However, both Harutyunyan and Pashinyan insisted on going ahead, in spite of the risks that the voting process carried. On March 31, we could see that the majority of Artsakh voters supported this position and the voting was held reasonably well under the circumstances, though of course this became another missed opportunity in terms of foreign policy. Postponing the vote would have demonstrated that Karabakh is in line with global thinking, and make it possible for foreign observers to participate in large numbers. Foreign governments and NGOs could have seen regular civic processes at work. None of this was possible under emergency conditions.

Now that it’s over, and Mayilian has effectively conceded to Harutyunyan and the second round has become a mere formality without campaigning or competition, I am not as concerned about it being held on time. Overall, it appears that the Covid-19 pandemic is receding around the world, including Armenia, though of course it is not over yet, and it will take months if not years to address its major consequences.

In picture: NK President Bako Sahakyan and his wife at the polling station in Stepanakert (photo by Tatul Hakobyan)