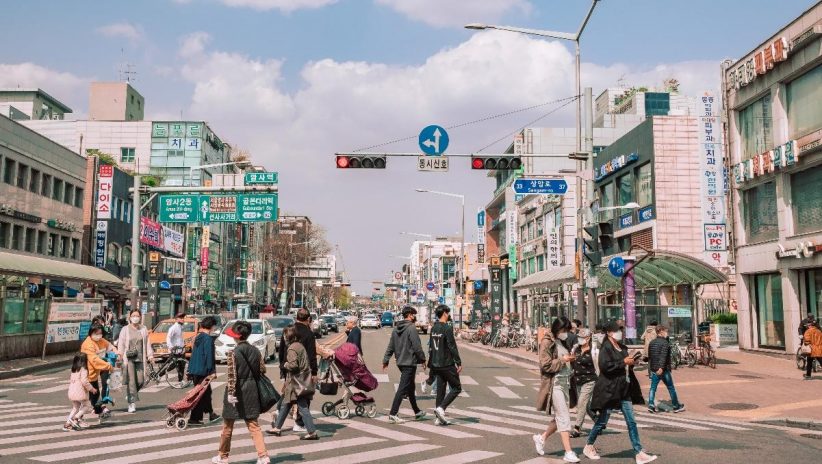 While surfing the vast realms of the Covid19-internet and different countries’ response to the pandemic, I came across this internet “wisdom” that went a little like this: “The world is living in 2020 while South Korea is somewhere in 2030.” This may seem far-fetched, but… is it?

YEREVAN – On a Wednesday morning in early March, as we gathered in our sun-lit office where the staff holds the daily CivilNet editorial meetings, I received a message from one of the editors at Korea.net, the portal that “represents the voice of the Korean government and promotes Korea online,” effectively notifying me that I had been selected as a Korea.net Honorary Reporter.

I was thrilled to know it entailed a possible visit to the country, having long been fascinated by its history, culture and above all, the phenomenon of robust technological and economic growth that seemed to be, as some mildly put it, on steroids.

This was an odd time because the world was caught by surprise by the novel coronavirus – Covid-19. But South Korea? Not so much.

This is partly because South Korea has been down this road before , having battled a similar outbreak of yet another coronavirus, the far more deadly MERS, back in 2015.

In its fascinating way that Koreans achieve things, the country has managed to flatten the curve that initially had a very steep incline, and has been able to avoid the Chinese model of harsh lockdowns the world has also had to implement (apart from Sweden, causing a huge blow to the world economy and markets.  South Korea, however, seems to have managed to escape the demise: the country hasn’t even closed its border, although all arrivals must enter a two week quarantine. Incheon International Airport, the primary airport serving the Seoul Capital Area, is ranked the 16th busiest airport in the world with 68,350,784 people traveling through it in 2019. More than 50% of annual tourists consist of travelers from which country? You guessed it, China, the cradle of the virus.

So what is behind Korea’s efficient containment of the virus that is ravaging the rest of the world?

Someone on the internet jokingly said, “The world is living in 2020 while S. Korea is somewhere in 2030.” This may seem far-stretched, but… is it though?

As the spring is in full bloom on the beautifully paved streets of Seoul, – equal parts futuristic and historical, – people are out and about their business, some even leisurely picnicking on the banks of the Han river. To me, who has been in lockdown for about a month, with a similarly non-exciting month lying ahead, this seems pretty utopian.

Some call South Korea’s strategy the 4T strategy – Test, Triage, Trace and Treat. But there are two other Ts – people’s Trust in their government and  government’s Transparency. South Korea saw the number spike in late February because of its massive testing capabilities and accurate data recording.

The country immediately started mass production of test-kits, establishing drive-thru and walk-in free test centers with results coming in as soon as 24 hours. By early March, South Korea was conducting 20,000 tests a day, the most anywhere in the world. Anyone who tested positive was immediately isolated. Infected individuals also had to download an app that alerts authorities when they go out, and people in the vicinity of an infected person receive phone alerts from the authorities.

If you think that South Korea is able to do this because of its smaller size, consider this: Seoul Metropolitan city is the world’s 2nd largest with a population of 25.6 million people, with its population density almost twice that of New York City and eight times greater than Rome.

Masks: what about them?

South Koreans are used to wearing masks on a daily basis because of fine dust that by the way, partly come from China and Mongolian deserts with prevailing winds.

However, apart from being a health protection measure, masks are a fashion statement in South Korea. Anyone familiar with the KPOP culture and the Korean entertainment industry, would know. By the way, Koreans didn’t line up their supermarkets to empty the shelves of toilet paper and alcogel in what was called panic buying that swept across the USA and some of Europe. The only mild shortage has ever been that of the face masks.

COVID-19 surveillance can be deeply intrusive. In South Korea, where a democratic country flattened the rate of the outbreak’s growth, authorities retraced the physical steps of those who tested positive. They enlisted credit card records for purchase patterns, GPS data for travel patterns, and security-camera footage for verification. Surveillance in data-dystopian countries like China was far more extensive.

At first glance, South Korea’s experience shows that countries around the world can learn much from it, especially when considering that a second-wave of the virus is still likely. Lockdowns are not a long-term solution, although they have proven to be effective in temporarily stopping the uncontrollable spread of this virus.

The South Korean government has access to private GPS data to use only during national emergencies. At the same time, many around the world express concerns that the government’s GPS surveillance of its citizens poses a risk to privacy and information security. But aren’t we already sending GPS information to Google right now without any knowledge about where all that data might end up? I’m no tech expert but even I would know that as long as you have a smartphone, your location info is always provided to some company or institution, regardless of which country you reside in. It’s just a difference of whether the government can use that data to save lives or not.

This topic has also sparked a heated debate in Armenia, where the country’s parliament voted in favor of adopting the controversial data-collecting law “to limit the spread of the coronavirus,” while those opposing it expressed their concerns about the state’s interference with the citizens’ personal data.

To scratch the surface of understanding South Korea’s phenomenon, let’s take a short dive into its most recent history.

Following the Korean War of 1950-1953, South Korea remained one of the poorest countries in the world for over a decade. Fast-forward to now, and we have a country that has the 4th largest economy in Asia and the 12th largest in the world. Today, it is the world’s 6th largest car-manufacturer, largest ship builder, largest manufacturer of memory chips, and the list goes on and on.

The fact that Korea was able to do so in about 50 years is remarkable. This economic growth is described as the Miracle on the Han River. The term was coined after the phrase “Miracle on the Rhine” that was used to refer to the economic rebirth of West Germany after World War II. South Korea’s growth has brought the country to the ranks of countries in the OECD and the G-20.

A larger outlook: “The future is Asian”?

In the book The Future is Asian, Parag Khanna argues that the world is becoming more multipolar. However, he also predicts that the 21st century will be the “Asian Century.” Will it, though?

With an emphasis on mostly economic trends, Khanna argues that, “In the 19th century, the world was Europeanized. In the 20th century, it was Americanized. Now, in the 21st century, the world is being Asianized.” He does have a point when we consider  the Asian ‘tigers’ – Hong Kong, Singapore, Taiwan and South Korea, the newer, booming economies of South-east Asia, and look further to the new economic superpowers of China and India.

While there are many things in this book I disagree with, including ideas like “Democracy guarantees neither that good ideas will emerge nor that they will be implemented,” I have to agree that there are undoubtedly many truths in his book, among them this quote, “There is no more important region of the world for us to better understand than Asia – and thus we cannot afford to keep getting Asia so wrong.”

I still haven’t finished the book. I have all the time in the world to do so, or so it seems.

Much has been said about the way this virus will,and already is, altering our reality , the reality that was once perceived as the “old normal.” What we need to do now is start thinking about the possibility of a “new normal,” where sanitary precautions and social distancing will not be extra and stigmatized, but instead, an inseparable part of our daily routine.

And in the hopefully near future, when the vaccine is out and we’re out of our caves, with obvious deficiencies of vitamin D but a tiny bit wiser and a whole lot paranoid about viruses; with a newfound obsession for washing hands and carrying around alcogels, ready for extra amounts of human interaction (and several urgent visits to beauty salons, gyms and whatnot), we can revert back to Old Normal, looking back at this from the height of someone who overcame, survived and learnt. And then…

There won’t be much time to sit back and relax. While trying to salvage what is left of the economy, (both worldwide and in my country) this will also be the appropriate time to consider that the South Korean approach may be a good one to consider, if this virus is here to stay.

South Koreans are generally humble people. They believe they’re just doing their jobs in fighting the pandemic. As a South Korean acquaintance told me during one of our insightful conversations on Kakao Talk (something like Korea’s Whatsapp and China’s WeChat), they were not expecting all this attention from international media, nor are they advocating that “their way is the best way.”

In one thing, he is certain – whichever model the world chooses in order to deal with this pandemic, it will be better than nothing.

Meanwhile, we’re still in this, together. While the increasing tendency of this outbreak has been for the nation-states to shut-down and try to contain the virus from within, we all need to come together across borders and nationalities and implement global disease prevention and control measures. Together, we will ultimately win.

Zara Poghosyan is the Communications Manager at CivilNet Studio in Yerevan and an Armenia producer for Al Jazeera English.