It was inevitable.  The change of government in Armenia brought on by the mass protests or April and May is causing ripple effects elsewhere in the country and throughout the Armenian world.

Soon after the May 8 election of Nikol Pashinyan as prime minister, activists besieged the office of Yerevan’s Republican mayor Taron Margaryan, calling for his resignation. The spark in that case were allegations that a privately-funded renovation of a park near mayor’s office – incidentally approved both by Republicans and Pashinyan-allied parties – involved mistreatment of trees. Margaryan managed to circle the wagons, with his loyalists holding a counter-demonstration, and the mayor himself made clear he had no intention to resign.

On June 1, the aftershocks reached the eastern-most spurs of the Armenian highland, the Republic of Artsakh. A brawl that sent two guys to the hospital served as a spark to a spontaneous protest because culprits were affiliated with the National Security Service’s special-designation unit and relatives of high-placed officials, including NKR’s NSS director Arshavir Gharamyan.

Apparently, this was not the first beating that involved the special-designation guys. One of the previous incidents involved David Simonyan and his twin brother. Simonyan used Yerevan methods of blocking traffic to quickly launch a protest outside the NSS base on Stepanakert’s main avenue. During four days of protests, participants called for punishment of the guilty, resignation of Gharamyan and police chief Kamo Aghajanyan, as well as Artsakh’s eventual union with Armenia. “We want things to change here the way they did in Yerevan,” Simonyan said. 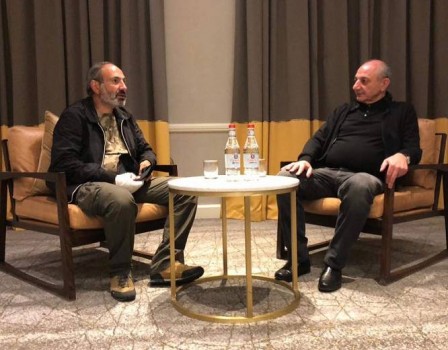 Additional protesters arrived from the southern Karabakh town of Hadrut, which saw the first protest of the Karabakh movement in February 1988. Hadrut residents specifically complained of Aghajanyan’s overbearing influence in his native region. Also present was the former Hadrut MP Vahan Badasyan and members of NKR’s only opposition group, the National Revival Party, led by sitting MP Hayk Khanumyan. They drew up demands and began negotiating with state minister Arayik Harutyunyan, who also came to the protest, and then met with president Bako Sahakyan.

Taking a page from Margaryan’s post-revolution survival rule book, NKR government organized its own counter-protest. While low on enthusiasm, it was also visibly larger than the anti-NSS / police protest. This reflected a specific challenge that Stepanakert shares with smaller Armenian towns beyond Yerevan, Gyumri and Vanadzor, where local economies are dominated by government agencies with little in the way of private sector and associated jobs not dependent on government funding. It is thus nearly impossible for organic local protests to reach critical mass to be able to demand immediate government changes, as happened in Yerevan.

Additionally, much has been done to snuff out any anti-government activism. Citing the threat of war with Azerbaijan, Karabakh officials have turned Stepanakert into a protest-free zone, as Azerbaijani authorities did with much of their country. When in 2015, Jirair Sefilyan-led activists attempted to enter Karabakh to stage an anti-Serzh Sargsyan rally, they were assaulted by uniform police and NSS and forced to turn around. In 2016, when former Karabakh army commander Samvel Babayan’s visit resulted in a spontaneous demonstration, MP Khanumyan was abducted and beaten, after he called for Babayan’s appointment as defense minister. And in 2017, Bako Sahakyan was elected to his third term as president, in what amounted to a precedent for Sargsyan’s own ill-fated power grab.

As the political crisis raged in Yerevan, most Artsakh residents viewed the protests with concern and only a few activists staged small scale solidarity events. As protests expanded, Bako Sahakyan arrived in Yerevan and was among the small group of Armenian leaders meeting shortly before Sargsyan announced his resignation on April 23. The following day Sahakyan met with Pashinyan. Sahakyan’s, as well as the Armenian military’s largely neutral stance helped ensure a smooth transition from Sargsyan to Pashinyan. The day after his election, Pashinyan visited Artsakh for May 9 Victory Day festivities.

For the first three days of Stepanakert protests, Pashinyan and his government officials remained mum. When Pashinyan finally spoke via Facebook Live on June 4, he asked that the protests be suspended “to let Sahakyan address their demands.” It is unclear to what extent Sahakyan can do that since officials involved, particularly Gharamyan, are his close friends.

From the time of his elevation to the presidency in 2007, Sahakyan had been tied at the hip to Serzh Sargsyan, whom he never publicly disagreed with. Uncharismatic and modest, Sahakyan has been quite popular in Karabakh for addressing some of the basic issues, such as Stepanakert water supply and housing construction. Still, without Sargsyan in power in Yerevan, Sahakyan seems rudderless and his replacement appears inevitable.

The photo from protest is courtesy of Haik Ghazaryan's Facebook.

Protests in Karabakh: How Did it Happen?

On the evening of June 4, citizens in Stepanakert, the capital of Nagorno Karabakh, ended the protest rally that had been going on for 4 days, after Armenian Prime Minister Nikol Pashinyan urged them to do so. What happened in Nagorno Karabakh was an unprecedented manifestation of civic unrest, protesting the lack of justice and the arbitrary actions of the powr ministries and law enforcement authorities.

Karabakh State Minister Arayik Harutyunyan and opposition Member of Parliament Hayk Khanumyan addressed the protesters at a rally in Stepanakert on June 3. CivilNet reports from Stepanakert.

Demonstrations against "structures of power" have began in Stepanakert, the capital of Nagorno-Karabakh. Protesters are demanding the resignation of the heads of these structures.