It’s been 28 years since the collapse of the Soviet Union in December 1991, much of the political symbolism of that era has been removed from the cities of the former Soviet Armenia.

Having said that, in Yerevan, some remnants of that time and ideology have been left to linger on.

The fun part is that much of those traces, be it hammer and sickle symbols or red stars, can be tucked away and may not stand out to the naked eye.

But, spotting some of these historical goodies can be a cause for surprise, especially when you realise that they were under your nose the whole time.

Here’s some examples of just that, vestiges of the past that you can explore yourself throughout Yerevan.

There are some of the obvious examples like the column on top of Sasuntsi Davit Railway Station with iconic socialist heraldry and a red star, also with hammer and sickle symbols incorporated into the columns of the station.

But you need not go that far from the center to see some less noticeable examples.

Check out Republic Square for example, the decorative work on the buildings might disguise some more USSR-esque attributes. Like, the Soviet Armenia emblem on the clocktower, or the hammer and sickle symbol above the central entrance of the government building.

Or, on the opposite side of the square, where the post office and bank is, notice the black rails above each entrance with hammer and sickles decorated into the rails.

Hidden hammer and sickles are more numerous than you would think. Near the Yerevan State University, you’ll find rails with the symbol flanked by garlens of wheat, a classic Soviet symbol. As well as, above the entrance of the General Prosecutor’s Office of Armenia Building, or even on the wall outside a typical neighbourhood police station in the suburb of Shengavit. 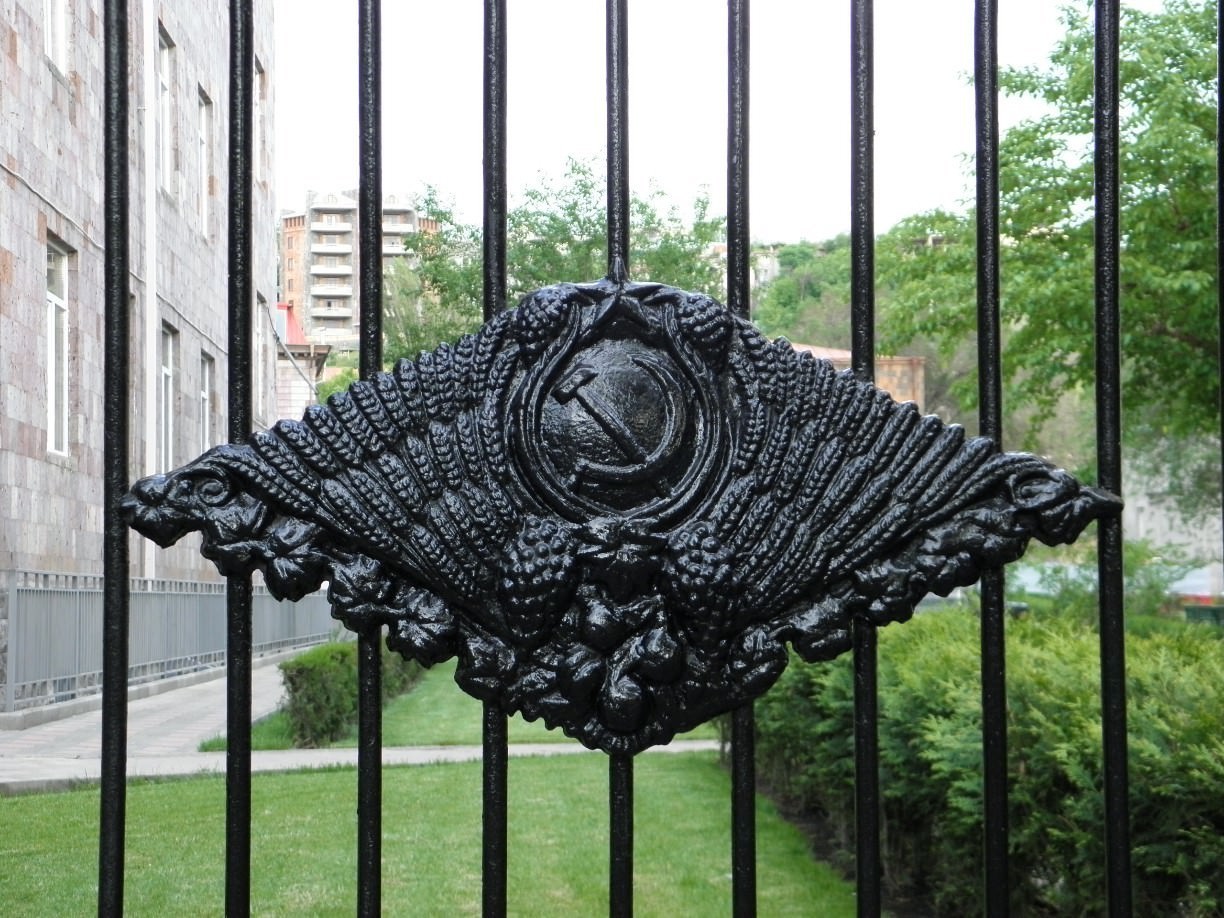 But, probably the best example of the hammer and sickle symbol in its glorious entirety is on the Public Radio of Armenia building. Just keep heading away from the centre, from Vernissage, and cross the park and you’ll find on the facade of the building a huge Soviet emblem which you might miss unless you look up.

Also, if you go down Moskovyan Street, you’ll come across the Yerevan Theater of the Young Spectator. Upon a closer look, you’ll see a facade of a group of people with classic Soviet socialistic characteristics, flanked by two profiles, one of Vladimir Lenin and the other of Armenian Bolshevik politician, Stepan Shahumian.

Outside Yerevan there are even more Soviet gems. An hour north from Yerevan, Hrazdan is known to have been constructed as an archetypal Soviet town in the 50s. On the sides of the municipality building in the centre of Hrazdan, you’ll find memorials to Soviet war heroes, again decorated with Soviet symbolism.

Even look in through the windows of the municipality building, and you might catch a glimpse of some massive dusty portraits of the fathers of Communism, Lenin, Karl Marx and Friedrich Engels.

There are even some post-Soviet examples of Soviet symbolism. If you travel to the new park near the municipality building of Yerevan, between Children’s Park and the Italian Embassy. The park is between two more monuments, both of Bolshevik revolutionaries, one of Alexander Miasnikian and the other of Stepan Shahumian.

But, if you go to the fountains with the statues of children, check out the statue of the little boy with the paper boat. Now, take a closer look at the paper boat. The paper boat has been made so it appears it was made out of a Soviet Union newspaper, with the words “Soviet Armenia,” and the USSR emblem on the newspaper. Such a detailed touch that even regular visitors to the park might miss.

By far however, the most iconic example is not only a treasure for history buffs, but almost a metaphor of Armenia’s modern history itself. The Mother Armenia statue that looms over the city, used to have a statue of Joseph Stalin in its place, little is known about what happened to Stalin’s statue.

Having said this, another enormous statue of Vladimir Lenin once stood in Republic Square. It was torn down when Armenia became independent but the remnants of that statue have now been placed in the courtyard behind the National Gallery building. Catch a glimpse of the statue through one of the windows, or charm some of the staff of the Gallery and you might get a moment with the father of the Soviet Union.

These are just some honourable mentions, there are plenty more remnant symbols of a past that it is not only long gone but also instrumental in understanding modern Armenia. Try spotting some of these traces of history for yourself next time you’re wandering around an Armenian city.