Sounds of explosions were heard again in Stepanakert today, they were small, but still. There was no siren, so we don't even know what it might have been.  When there is no siren, we think it might not be anything dangerous, it could mean we shot down the drone. We comfort ourselves. Seems like it works.

A former Los Angeles Times reporter arrived in Stepanakert. He is a freelancer and he also writes for CIVILNET. He is a cool man with a tender heart. He is Armenian. I have been accompanying him, helping with translation. Today we went into one of the shelters. I've been there before and made some friends.  As soon as we entered, the children ran up to me, and I forgot why I was there and also ran up  to them, leaving behind everything and everyone.  Elmira, one of the women in the shelter, was cooking tanav. Tanav is a special Armenian magic potion that heals everything (its ingredients are yogurt, rice, and some herbs). She was cooking it on a spiral stove, in the basement. We chatted for a while, had some tanav with cheese and bread.

Someone from England sent clothes with the CIVILNET team. We opened the box with the children, rejoiced together. And there was a small bag there which we opened at the very end. 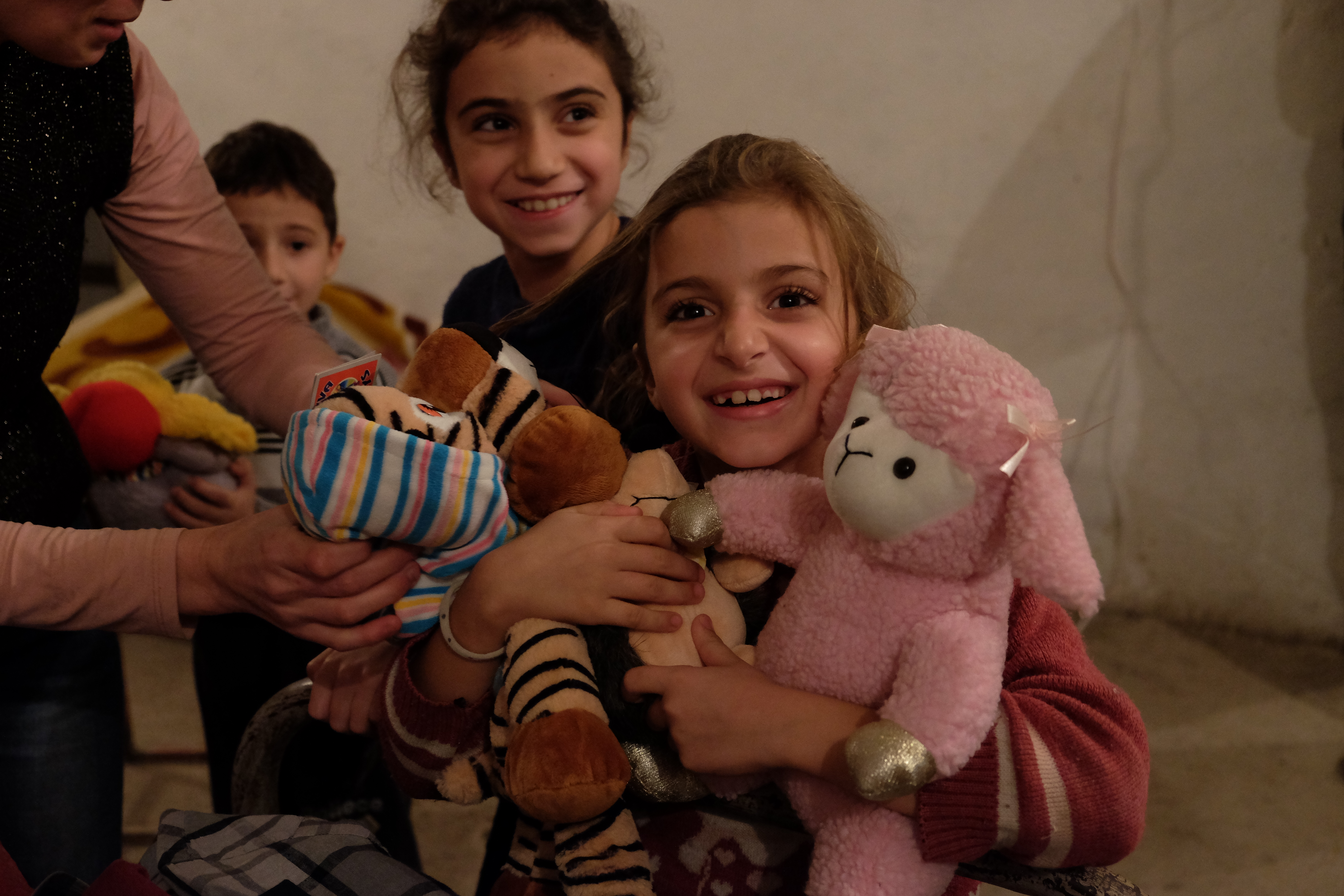 ... I can't describe how delighted the children were... They started laughing, showing off the toys, saying “Look! See what they gave us! I will call it like this, and you call yours like that!"

Also, Mike (the freelancer reporter) asked a 5-year-old boy Marat what he would do if he had a lot of money. He replied, "I would buy a watch and sunglasses." And Mike took his Lacoste glasses out of his bag and gave them to Marat: "Try them on!" And Marat, not knowing how to put them on, put them backwards. We all laughed and helped him to do it properly. They were too big for him, but he was incredibly happy. Cameraman Gevorg and I looked at the boy and said: “Um ... Marat, you have to be careful, they cost a fortune!” We all had a good laugh...

At that moment, I got a phone call from my mom and heard the best news I could have heard: my brother is back from the frontline! Just for a day, of course, just to take a shower and go back to the frontline, but still... All of us hurried to our place, I  got out of the car, ran up to Albert and hugged him so tight! At such moments, they say - she hugged him, as if he returned from a war.  But he really did return from the war...  We went to the city to find an open market and do some shopping.

Here I will have to say that besides my sibling Albert, I also have many cousins. And one of  them is my favorite. Because we used to work together for some time. There was a special bond between us, and he has always had a heart of gold. Before the war, we met  by chance in the city, and decided to have some tea and chat. There was so much to share with each other.

Back to today. Albert and I managed to find an open store, we even bought some yogurt. Then, there was a second phone call from my mom. But this time it was the worst news. My favorite cousin was captured by the Azerbaijani army... I stood in the store with yogurt in my hands, I didn't  move,  and didn't fully realize what mom was saying... There is our last conversation with him in my head, his smile, his laugh. And mom says he has been taken hostage. I hear her voice, but it is his laughter in my ears.  I turn the phone off, saying "we'll talk later, okay". I stand and don't move. There is ringing in my ears, like after an explosion. I remember the last words I said to him: "Look, don't be a stranger, we'll definitely go somewhere next week!" I went to the cashbox, stood in line. I see his face as he nods his head, "yes, we'll definitely meet." My friends came up to me. "What's wrong?" "My cousin was taken prisoner." They are shocked, I am shocked, everyone is silent...

I am still silent.