The Second Artsakh War lasted for 44 days. During each of those days, people in Armenia and in Artsakh woke up anxiously for information from the frontline. For those who had family and friends serving in the army, checking the new list of names of fallen soldiers became a daily ritual. Life had suddenly stopped. Since the end of the war, however, towns and villages are attempting to settle back to their normal lives.

On November 9, following the signing of the trilateral statement by leaders of Armenia, Russia and Azerbaijan, several Armenian-controlled regions were handed over to Azerbaijan. Within a few weeks, these changes transformed Armenia's Syunik Province into a border region. Those who were born and lived in Syunik during the USSR remember a time when Azerbaijan was as close to them as it is now.

In this new reality, most of the bordering villages face the same problem - the loss of pastures. It was common for villagers in Syunik to take their cattle to Artsakh, mostly towards pastures in Hadrut. Now, deprived of that land, many are forced to sell their animals.

In Syunik's Aravus village, there is another unusual scene - there is an area where Armenian and Azerbaijani servicemen are on duty on the top of the same mountain, only 20 meters away from each other. For now, there is no communication between them.

But, Armenians in Aravus tell CIVILNET that they believe they can find common ground with their new neighbors.

Fifty three hectares of land from Aravus village is now under Azerbaijani control. Initially, village head Argam Hovsepyan negotiated with the Azerbaijani servicemen and managed to keep the area under Armenian control. But the agreements fell apart a week later and Armenians had to leave those lands. Hovsepyan is originally from Baku, Azerbaijan. He speaks Azerbaijani well and hopes that he'll be able to negotiate the return of the pastures to the community in the near future.

In another Syunik border village, Khoznavar, children show CIVILNET crew the Azerbaijani military positions. The villagers say that a few days ago, the Azerbaijani servicemen invited the Armenian soldiers to drink tea together. They don’t know whether the invitation was accepted or not. 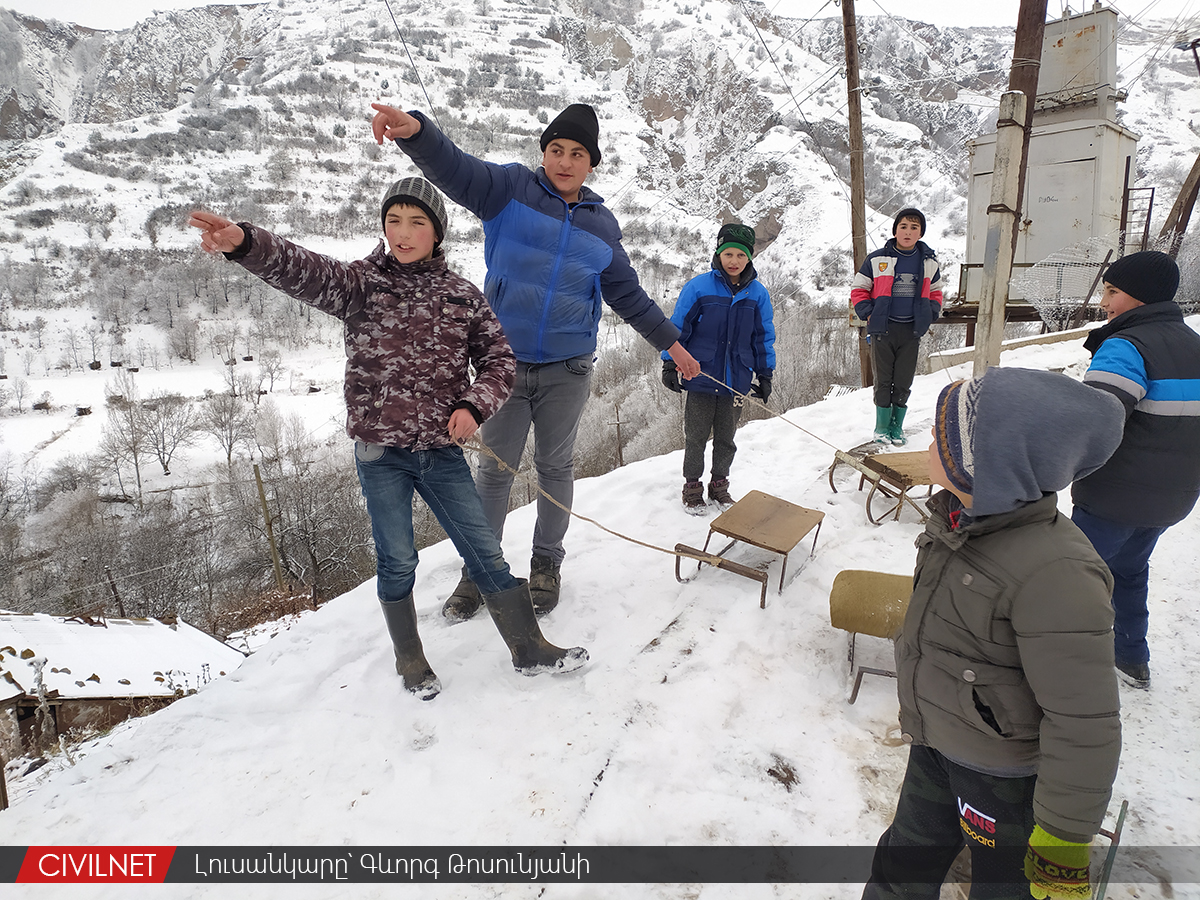 Few kilometers away from Khoznavar is the village of Khnatsakh. One of the residents, Serzhik Ghazaryan, says that he will continue to live in the village. But asked whether it is possible to have a relationship with Azerbaijanis, he answered no. "As long as there is blood, it is impossible," he says. In this village, one can still see traces of the first Artsakh war from the 1990s.

Syunik's Tegh village has one of the largest populations in the area. Here, as in other border communities, residents are still counting the losses of pastures and plains.

Hovsep Ghazaryan's house in Tegh village is the closest to the border. Each day since the end of the war, his family wakes up to a clear view of new Azerbaijani military posts.

The struggle in Yerevan is a political one - the opposition is holding rallies demanding the resignation of Prime Minister Nikol Pashinyan.

In this new reality, it is impossible not to remember the words of Soviet-Armenian writer Hrant Matevosyan: "To come, to arrive at the threshold of the third millennium and to not learn one lesson from 2000 years of trials? At no point in those 20 centuries, at any crucial moment, to be unable to take a step back, to add one ally, to remove one enemy... To suffer so much defeat yet not learn how to win?"

"At the trilateral meeting held in Moscow on January 11, this issue was discussed for quite a long time. Initially, the following task was set in this issue, that the Armenian and Azerbaijani sides would draw up lists of missing persons whom they want to bring out of captivity. Azerbaijan submitted such a list, the number was insignificant. All of them were returned. After that, the Azerbaijani side did not submit lists of missing persons, prisoners of war or other persons,” Lavrov said, adding that the Armenian side submitted these lists ''not all at once and not in full.”

Speaking about the trilateral statement, Putin reiterated that the document first of all refers to the complete cessation of hostilities, the sending of Russian peacekeepers to the region and, most importantly, providing the civilian population affected by the clashes with all possible and effective assistance in returning to normal life.