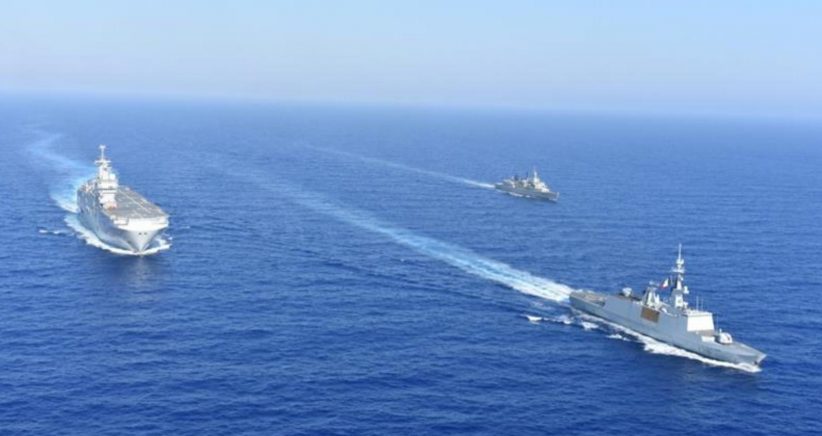 The article was published in the World Energy Weekly (September 7 issue), a publication of Petrostrategies, a French think-tank specializing in energy issues.

In the Eastern Mediterranean, energy is just a card in Ankara’s game, which has much broader goals.

Political and military tensions in the Eastern Mediterranean rose so high in August that, in the words of German Foreign Minister Heiko Maas, “the slightest spark can lead to disaster”. Faced with the escalation of the Turkish offensive, France deployed a carrier strike group to the region, while joint military maneuvers were held by Cyprus, Greece, France and Italy, as well as by Greece and the UAE. At least one incident between Greek and Turkish ships (a collision between frigates) took place, as well as countless provocations over the Mediterranean by military aircraft from both countries.

French President Emmanuel Macron went so far as to declare that his country had notified Ankara of a “red line” that must not be crossed, and added that he had sent an aircraft carrier because the Turks only respect actions not words: “I have to be consistent in deeds and words. I can tell you that the Turks only consider and respect that”, he said. “When it comes to fighting, we don’t hesitate to give martyrs,” Turkish President Recep Tayip Erdogan retorted. “The question is: are those who rise up against us in the Mediterranean and the Middle East ready [to make] the same sacrifices?”, he added.

While hydrocarbon resources recently discovered in the Eastern Mediterranean lie at the core of these tensions, of course, along with gasline projects aimed at exporting some of them to Europe, the issues go beyond energy. In reality, Erdogan’s Turkey is trying to pave the way for a broad renegotiation of its maritime and land borders, which were defined by the now century-old Treaty of Lausanne on July 24, 1923. At the time, this treaty was not only the last act in the collapse of the Ottoman Empire – the “sick man” of Europe, as it was then called – but also the cornerstone of the Republic of Turkey founded by Mustafa Kemal. In Lausanne, the latter had managed to safeguard what it considered to be essential: the Anatolian plateau emptied of its Christian minorities (following massacres and an exodus that took place in the late 19th and early 20th centuries), where the Turks would form a large relative majority dominating the remaining Muslim minorities: Kurds, Alevis and Arabs.

However, Turkey has never fully accepted the Treaty of Lausanne. Although the Turks – after losing the First World War – originally saw it as an unexpected victory (as it gave the nascent Republic of Turkey broad territories in eastern Anatolia, formerly granted to the Armenians and Kurds by the Treaty of Sèvres in 1920), they have since come to view it as an edict imposed on their country by the Western victor states. With the passage of time, Lausanne has become one of the components of what Turkish historians call the psychology of “victimization”.

Turkish Prime Minister Turgut Ozal’s neo-Ottoman policy (“yeni osmanlicik”), inaugurated in the 1990s, aimed to overturn history’s verdict against Turkish identity and culture, and to correct what was deemed to have been one of Kemal’s Westernist excesses. This policy was subsequently taken up by Erdogan, along with an emphasis on its Islamic component and a clear territorial stance aimed at correcting the “unfair” borders imposed by Lausanne. The concept of the “Blue Homeland” (“Mavi vatan”) was forged under his first government, in 2006, and claims 150,000 square kilometers of maritime territory “stolen” from Turkey by the Treaty of Lausanne. “Defending the Blue Homeland is just as important as the efforts we have been exerting to defend our homeland”, Erdogan said on August 18, 2020. “We will take whatever [Turkey] is entitled to in the Mediterranean, Aegean and Black Seas”, he said on August 26.

The discovery of huge natural gas reserves in the Eastern Mediterranean (especially after Israel’s Leviathan field was found in 2010) added a new dimension to the concept of the Blue Homeland and increased its importance for Turkey. After the failed military coup in July 2016, Erdogan gave his neo-Ottoman policy a new impetus. To merely symbolic gestures, Ankara started to add concrete deeds both abroad and at home (such as converting Hagia Sophia into a mosque). In particular, this was reflected in the expansion of an international Turkish military presence which had hitherto been limited to northern Cyprus (occupied by the Turkish army since 1974). Thus, Turkey now has a military foothold in half a dozen countries (Afghanistan, Iraq, Libya, Qatar, Somalia and Syria), as well as access facilities in Azerbaijan. Furthermore, an agreement to set up a Turkish naval base in Sudan, on the Red Sea – which seriously annoyed both Saudi Arabia and Egypt – only failed due to a regime change in Khartoum in January 2019.

Erdogan’s military actions have often had domestic motivations. Thus, when his Justice and Development Party (Adalet ve Kalkinma Partisi: AKP) lost its majority in the legislative elections in June 2015, he entered into an alliance with the far-right MHP, launched a military offensive against the Kurds in July, dissolved Parliament in August and won the following elections in November 2015. He launched his big offensive in Syria shortly before the June 2018 elections, which he also won. His critics believe that his current confrontational one-upmanship in the Eastern Mediterranean is a response to domestic political concerns.

The municipal elections of March 2019 didn’t go well for the AKP, in particular because it lost Istanbul, the city of which Erdogan was the mayor and which was his springboard to power. Turkey’s economic capital elected Ekrem Imamoglu, a rising figure in the opposition Kemalist party CHP, by a majority of 80,000 votes. While the AKP overturned this initial result in the courts, Imamoglu increased his advantage to 800,000 votes during the second round, in June 2019.

The CHP now has a worthy champion to pit against Erdogan in the presidential and legislative elections, which are to be held no later than June 25, 2023. While voter surveys placed the party 13 points behind the AKP in February 2020, the gap had closed to only six points in June. The AKP will have to use its remaining three years in office to restore the image of both the party and its leader. However, the Turkish economy is doing very badly.

The value of the Turkish pound against the dollar has been cut sixfold since 2008. Meanwhile, Turkey’s private-sector debt has exploded from $150 billion to $350 billion, and inflation is eroding the purchasing power of Erdogan’s electorate. In an attempt to regain the hearts of a population still sensitive to evocations of the greatness of the past, the “new sultan” (as he has been nicknamed) is playing on national sentiment by promising to restore it. The semiofficial Turkish daily newspaper Sabah compares him to Sultan Abdülhamid II (the last absolute Ottoman monarch, from 1876 to 1909) who, it writes, was “harassed” by the West for wanting to modernize his country. But the analogy isn’t altogether flattering for Erdogan, as Abdülhamid II is also known as the “Red Sultan”, due to atrocities committed during his reign against minorities living within the Ottoman Empire.

All these political and economic problems will be solved when Turkey recovers its “rights” in the Mediterranean and develops the recently-discovered Sakarya gas field in the Black Sea, the Sabah columnist wrote on August 28. Referring to the Treaty of Lausanne, Sabah believes that Erdogan has won “many geopolitical gains over the years” in the Middle East. Thanks to him too, “we can assume” that Turkey has made gas discoveries in the Eastern Mediterranean, although these have not been made public “for obvious reasons”, writes the daily. “They are said to be much larger than the Sakarya find”. This will solve several problems, promises the semiofficial paper, through which Erdogan’s personal spokesperson, Bülent Arinç, sometimes addresses the masses: “a) the Greek Cypriot administration will recognize the sovereignty of the Turkish Republic of Northern Cyprus ; b) France will at least respect Turkey’s interests; c) Egypt, which has extensive natural gas resources in the eastern Mediterranean, will be forced to cooperate with Turkey; d) Greece will be obliged to respect the Turks in Western Thrace and the Turkey-Libya maritime deal, and to stop excluding Turkey from the EastMed gasline project”.

Sabah also lists the expected political benefits of a stronger Turkish economy, ostensibly to be brought about by Sakarya and the undisclosed gas discoveries in the Mediterranean. “As heir to the Ottoman Empire, Turkey will now be able to: a) better protect Turks in the Balkans, the Caucasus and the Aegean, as well as in Iraq and Syria; b) refute lies about the Armenian genocide; and c) give Azerbaijan more support in the Nagorno-Karabakh conflict”. As can be seen, the energy card is part of a much larger game which, further in the background, also includes the expansion of regional Turkish influence through the Muslim Brotherhood – which Erdogan supports – in countries such as Lebanon or Tunisia. The parallel development of Turkey’s recent rearmament program (it is about to deploy its first light aircraft carrier in the Mediterranean and is building six submarines, etc.) and its effort to develop offshore oil and gas exploration (it has acquired a seismic vessel and three drillships) is quite eloquent.

How far will the situation in the Mediterranean escalate? It’s clear that Turkey is isolated and doesn’t have the economic and military resources to achieve its stated goals. Even a country like Qatar, which owes it so much (Ankara rushed to its aid when Saudi Arabia and its allies declared an embargo against Doha in June 2017) is only supporting it grudgingly on this issue. Erdogan has performed several lastminute turnarounds in the past, but he has never before raised the stakes to such a high and complex level. He has never taken such huge gambles on foreign policy. He will have to show his electorate some concrete results. The European Union is waving both a carrot and a stick at him. In principle, a decision will have to be made at the European summit on September 24 and 25. There is talk of applying sanctions to Turkey, mainly targeting its maritime sector. At the same time, the EU is offering Ankara compensation in the event that it backs down in the Mediterranean. There is talk of greater access to the European market (450 million consumers) and new aid for refugees in Turkey. At this stage, however, there is no sign of a way out of the crisis.

In picture: Greek and French vessels sail in formation during a joint military exercise in the Mediterranean sea [File: Greek Ministry of Defence Handout/Reuters]