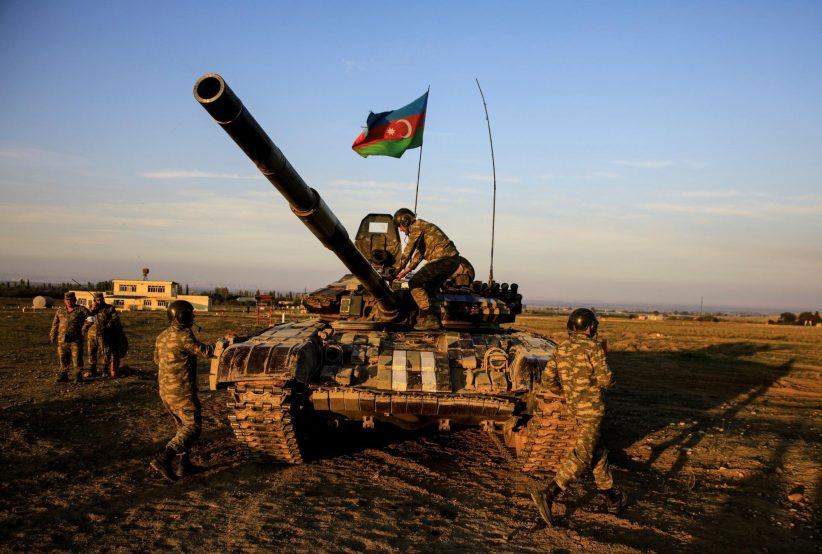 Transfer of Weapons to Armenia

Azerbaijani President Ilham Aliyev has stated that he was ready to resume negotiations with the Prime Minister of Armenia, but with the precondition that Armenia return the territories of Karabakh to Azerbaijan. The statement was made during an interview with Russian TASS news agency on October 19, in which he also mentioned that he is convinced that there are illegal transfers of weapons from Russia to Armenia. Although President Aliyev was mainly accusing Armenian businessmen living in Russia, it was apparent that he was inadvertently also addressing Russian officials.

In Azerbaijani press, allegations of illegal arms transfers are not limited to Russia. According to the pro-government Modern.az news site, under the guise of humanitarian aid, weapons have been sent to Armenia from Los Angeles on a Qatar Airways flight. Days ago, Turkey had forbidden the flight from passing through its airspace, effectively banning the shipment of humanitarian aid from the United States to Armenia. The Azerbaijani press had turned the issue of humanitarian aid to Karabakh into source for rumors and disinformation, further provoking its public.

Ali Karimli, a radical opposition figure, said that Azerbaijani society is fundamentally opposed to the authorities’ efforts to establish a ceasefire because Azerbaijanis want to take over more territories. Karimli said with respect to all the fallen soldiers, the people demand to move war forward.

Although the Azerbaijani press hardly reports on the number of fallen soldiers, certain videos of funerals have surfaced on social media. The death of Shaykh Kalbiyev has resonated throughout the masses, and has received varying responses from the Azerbaijani public since Kalbiyev was a sexual minority. The video shows a large attendance at Kalbiyev’s funeral with the crowd chanting “Allahu Akbar” (God is great). It is worth noting that the national flags of Turkey and Pakistan were seen in the video during his funeral. The presence of the Pakistani flag is not a coincidence, as there is a close partnership between Baku and Islamabad. The Pakistani Foreign Affairs Minister stated this week that Pakistan fully supports Azerbaijan in the conflict.

The Azerbaijani authorities are strengthening their control over communication lines in the country by blocking public access to the internet through different tactics. This became clear from the article published in Modern.az on October 20, which notes that the State Communication and Information Service has once again warned Azerbaijan’s citizens to refrain from accessing the Internet through a Virtual Private Network (VPN). Authorities justify their message by arguing that the application is vulnerable and could result in the enemy gathering information. But the populations attempt to access the internet through a VPN hint to the fact that they are seeking information.

Despite this, pro-government media outlets in Azerbaijan persistently deny that there is a lack of public information, and they insist on the public’s unconditional support for the authorities. Azerbaycan24 says that the level of trust in President Aliyev is so high that a large number of Azeris send letters of support to him daily.

In recent days, Azerbaijani media has also been circulating the idea that Armenians can and should live in harmony inside Azerbaijan.

Also Read: Another Ceasefire Had Ceased