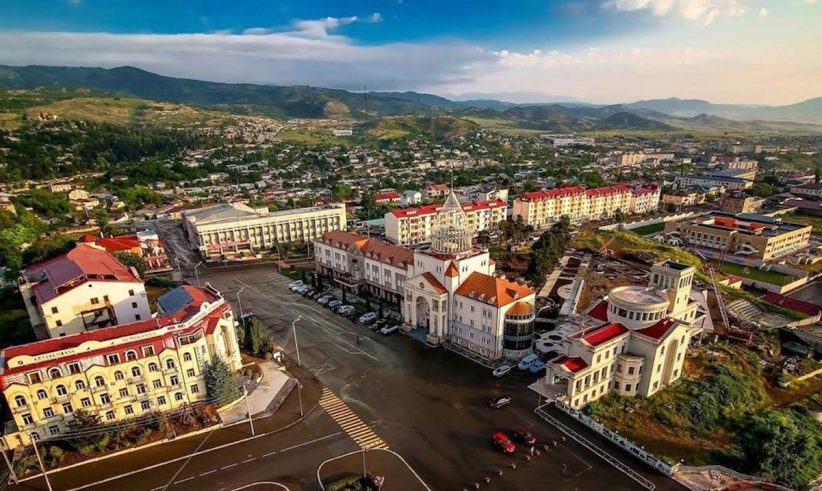 “Riding high in April, Shot down in May” – Frank Sinatra line from  “That’s Life”.

April to May? Hell, at least it took Frank a month to do what Angelika Zakaryan heartbreakingly did right before my eyes in a 15-minute journey from ecstasy to agony.

Angelika, also known as Lika, 26, is a journalist from Yerevan-based CIVILNET news agency who has been writing a personal daily diary of the war in her native Nagorno Karabakh for the last month. Her columns are brutally raw, innocent and heartfelt.

I met her on Day 27 of the war in what has become her new home: a school with a sturdy basement that has been converted into a bomb shelter. Our meeting had been prearranged by Salpi Ghazarian, the director of the Institute of Armenian Studies at the University of Southern. Before I left Los Angeles,  Salpi said “You’ll like Lika.”  I said nothing, but thought to myself  “No, I won’t.”  I almost never like anyone who someone else says I will. But, in this case, I was wrong and Salpi was right.

Angelika has this engagingly bright smile, the kind that nearly closes the eyes, that now often masquerades her sadness and anger. But, that smile also makes her darker thoughts all the more powerful when they break past her inherent goodness. When a kind person wishes ill will on someone, it hits much harder than when a commando says he will slaughter the enemy.

We engage in some small talk before we hit the streets of Stepanakert.  It’s no surprise – if you know me even a little – that “Casablanca” comes up. And Lika loves that movie, too, and even quotes one of the lines from Ilsa, aka Ingrid Bergman. “I hate this war so much.”

She also says the war has introduced her to Joan Baez and the song “Donna Donna”, which I’ve never heard.

Our first stop is another school converted to a bomb shelter. There are children here. After an hour or so, we leave to get some lunch.

On the way, in our van driven by Arshak, a veteran of the war here in the 1990s, Angelika gets news that sends her spirits soaring, sends her “riding high”.  Her brother is home from the front. Arshak speeds the Honda van to her house. As we get near, another car is pulling up and a man is getting out. It’s her brother.

“Stop! Stop!” she screams . “That’s my brother.” I slide open the van’s side door and before I can even get out, Lika is climbing over me and onto the street. She rushes to her brother and they embrace for a long, silent time.

Lika’s brother has been on the front since the beginning. His closest friends, all volunteers, have previous army experience. They have all survived so far, though several other young men they fought alongside, near Martakert, have been killed. Angelika hardly says a word as he and I talk briefly. She’s beaming, bouncing on her toes, hands either clasped behind her back or touching his shoulders.

She says we will go to the best store open and bring back some things to eat. Less than 15 minutes later, we are at a store called Gurman, a corner market type of place the size of a Seven-Eleven. I wander around, grab some chocolate bars and notice that Lika is off by herself near the toothpaste shelves. She’s on the phone.

When she approaches me a minute later, she’s not the same jubilant young woman I was just with. She looks like another person. I’ve never seen anyone “shell-shocked”, but I’m guessing they look like Angelika now. Her mother just called to tell her that her favorite cousin has been captured by the Azerbaijani military.

She stands numb in the little market as men in army uniforms pass by. “I’m so afraid. He has a heart of gold. I’m so afraid of what they will do to him. Beat him. Or worse.”

I don’t know what to say. What can I say?

Yesterday, I left Stepanakert. I had to say goodbye to Lika, so I go to the school-turned-bomb shelter, three-blocks from my room at the Park Hotel.

At the school, two metal doors are locked with thick iron chains. My phone doesn’t work. I call out her name. Then loudly. Then I yell. Nothing. Then, I think, hell I’m in a war zone, so I scream, big deal. And from the ceiling of my lungs, I roar out “Angelika! Lika! Angelika.” Still no reply. Then I see her appear through the dirty windows. She is so relieved to see me. “I thought they were yelling for me because the Azeris were coming to get me.”

That is her worst fear, she tells me as we go downstairs into a converted classroom where she sleeps.

“I would be more afraid of Azeri hands than Azeri bombs. If a bomb fell on me, I wouldn’t be afraid. I wouldn’t have time to be. But if they got their hands on me? The things they would do to a woman. It’s not that I don’t fear the bombs. If you are a human being you have to be afraid of bombs. But, I think they would do the most horrible things to me. But, still, as much as I hate this war, I am here.”

Lika reports her brother is back at the front. There is no further word about her cousin, although the International Red Cross has been alerted.

She drifts off in thought and comes back.

“Do you remember the fires in Australia a little while ago?  The world was so worried about the koala bears that were hurt and killed in the fire. I love koalas. But I wish people would care about Armenians like they care abut koala bears.”

Soon, we say our goodbyes. I go sentimental and steal a line from Casablanca. Swapping out Paris for Stepanakert. She walks back to her new home.

That night, in the calmness of a Yerevan hotel room, I look up the Joan Baez song “Donna Donna” and I understand why Angelika Zakaryan loves it so much.

Calves are easily bound and slaughtered

Never knowing the reason why.

But whoever treasures freedom,

Another Ceasefire Had Ceased