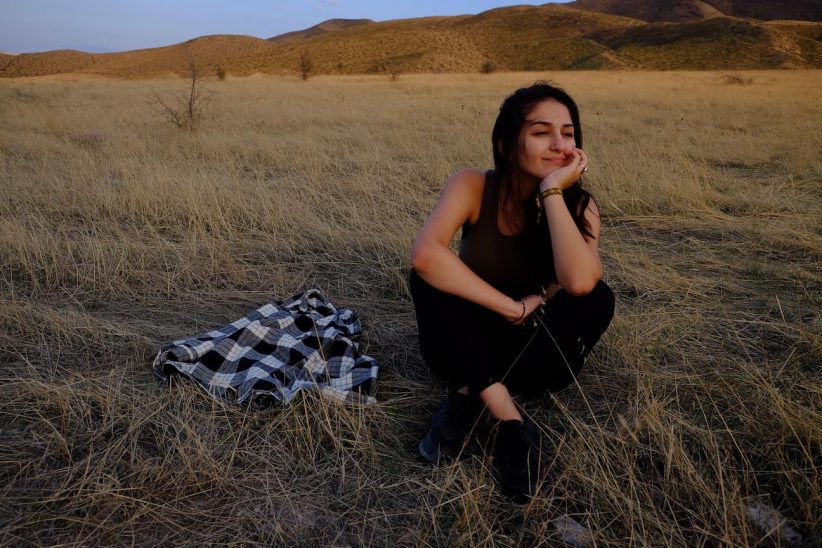 We had no electricity for most of the day today. I couldn’t even send my “diary”. Scrambled eggs were cooking on a stove when the lights turned off. Remained undercooked. There was nothing to do, we ate it just like that. Cheese, canned eggplant, and lavash saved us. Stepanakert was bombed the entire day, and we sat in the dark and wondered where the shell hit this time. After a while, many acquaintances called, because they heard that another Smerch exploded near my shelter. Perhaps it did.

Another call: “Lika, did you talk to your mother? The maternity hospital was blown up.” My mom works at the hospital. No, I didn’t talk to her… There are a million thoughts in my head – how? How can someone blow up a hospital, a maternity hospital? I do not want to believe that someone is capable of such a thing. Then I remembered the conversation with my mother. “Mom, can you go to Yerevan, too? At least for a while.” It’s scary to even imagine what she went through, being in the hospital from the first day of the war. So many wounded, so many worries… And she answered: “How can I leave? Who will do my duty? I’m a nurse, how can I leave my colleagues? Also, my son is at the front, do you think I can leave him and go to a safer place?” “What if they try to blow up the hospital? What then? They’ve tried several times, haven’t they? Nothing’s going to happen, don’t worry. I should worry about you, all day you are here and there. Maybe you should think about a safe place?” These are our conversations of the last 32 days.

I was drowning in these thoughts, and suddenly a phone call. “Lika, everything is fine with me, the maternity hospital was blown up, but we are fine. I can’t speak for too long, tell your dad that everything is fine so that he doesn’t worry.” Like this. She turned off the phone, and I sat in silence. For several minutes I tried to digest what just happened.

Electricity came back on for 15 minutes. I opened Telegram and read that Shushi was also bombed. About 40 days ago (a few days before the war) we went to Shushi with a team from CIVILNET. A diaspora group in Armenia bought smartphones for schoolchildren so that they could use them for remote learning in case of a worsening coronavirus situation. We went to the school in Shushi to film them. Today, I saw a video from this school where happy children were filmed a couple of weeks ago. The bomb hit right in front of the school entrance. The road, houses and surroundings were destroyed.

The warmest part of the day was a goodbye to a good friend – Michael, a visiting journalist. He went back to Los Angeles. In the morning he came to see me, talked, sadly said goodbye, hoping to meet in the near future. He wrote for the Los Angeles Times for many years, and now writes as a freelancer. I started doing journalism not so long ago. But I never really liked breaking news, to run somewhere in order to be the first to give some news. Having met Mike, who writes stories about people, after reading his pieces, I think I understood my job better. Journalism is not just saying the news. You can tell the stories of so many people, so many lives. Now I know what I will do during and after the war – I will write about people.