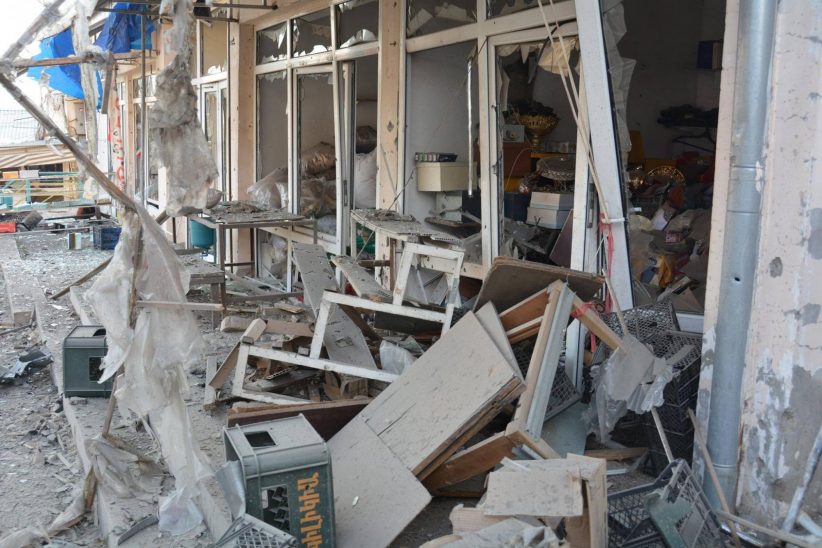 On Saturday, the Emergency and Rescue Service said the central market in Karabakh capital Stepanakert had come under fire and that large parts of it had been burned.

Shushan Stepanyan, spokeswoman for the Armenian defence ministry, also reported that several civilians had been wounded in attacks on the strategic city of Shushi, 15 km (9 miles) to the south of Stepanakert.

The shelling reported on October 31 came hours after talks in Geneva between the two countries’ foreign ministers and international mediators, during which sides agreed to not hit civilian areas.

On the same day, in Karabakh’s Martuni region, Apres Adamyan, (59), was killed in his house in the village of Herher.  On October 28, Azerbaijan shelled a maternity hospital in Stepanakert.

It is estimated that roughly 90,000 civilians, or 60 percent of Karabakh’s population, have fled their homes.

Artak Beglaryan and Arman Tatoyan, the Ombudsmen of Karabakh and Armenia, respectively, have sent a joint invitation to the diplomatic representatives and international organizations in Armenia, “To visit Artsakh and record the atrocities of Azerbaijani Armed Forces against the Artsakh population.”

In Geneva, the talks fell short of another cease-fire, but sides agreed to engage in an exchange of bodies on the battlefield, provide lists of detained prisoners of war within a week with the aim of eventual exchange, and communicate on issues “related to possible cease-fire verification mechanisms,” said a statement by the Minsk Group mediation co-chairs — Russia, France, and the United States.