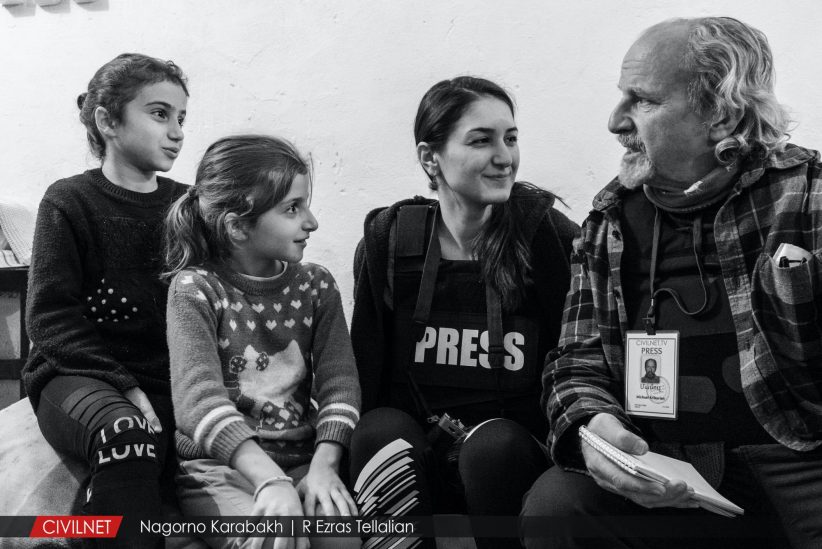 According to the United Nations Refugee Agency, three children I visited earlier this week are not war refugees. That’s because although they were forced to flee their homes because of war, they did not cross into another country. Instead, they went across town to a solid structure with a reinforced basement that can better protect them from falling bombs than their own dwelling could.

With their mother leading the way, they fled their home in Stepanakert, the capital of Karabakh, where war erupted the morning of September 27.  For the past month they have been at this fortified school that doubles as a bomb shelter and a rest stop for soldiers. The children’s father, a baker, has stayed at his bakery making bread for the troops.

Officials estimate at least 60% of the region’s population of roughly 150,000 have left their homes because of the war, some to the homes of family in Yerevan, some to abandoned buildings, some to a building that can take the punch of an explosion better than their own home.

Compared to those squalid camps you may have seen from the war in Syria, this converted school is not miserable, but the heart still aches, especially when you see your own family in the faces of these “non-refugees.”

The first two I meet, a 6-year-old Maneh and her sister Mary, remind me a lot of my own goddaughter and my cousin’s daughter. They are sitting on a bed, staring at a hot plate warming a large pot of Tanabur (aka Spas), a traditional Armenian yogurt soup with wheat berries and herbs.

When I start asking questions, first of Maneh and then of Mary, they have that unblinking stare that seems to say ‘unless you are my mother or bringing me some food what could you possible say to interest me?” It’s not a mean look at all. It’s adorable and sweet, but it definitely says “you’ve got nothing for me.”  Mary’s looks says: I am in a rough situation here, I’m dealing with suicide drones and you’re asking questions? Really?

Little does she know that although I might not have anything for her, it turns out I do have something for her little brother.

As Mary stares, with a seemingly permanent smile, Edward, 5, wearing pants and a sweater, comes up to us and starts singing. He is wearing the world’s cheapest sun glasses, worse than the type you get after your eyes are dilated. I reach into my computer bag and pull out my sunglasses and tell them all a story, which my fellow journalist Angelika translates.

“These sunglasses have been with me in my darkest hours. In the worst times they have brought me comfort. When I cry,  I put them on and no one can see my tears. And when I sing I put them on and I look cool. I want you to have them.”

I hand them to Edward who slowly takes them after looking at his sisters, then puts them on with much enthusiasm, Maneh has to straighten them. Edward beams and swings from side to side. He looks like a 6-year old Armenian Ray Charles. And then he starts to sing.  Lika translates.

I was a violet in a garden.

And you were a dream

You were born on a dark night

But now you are a violet only for me.

As Lika translates for me, I wish I had those sunglasses back. 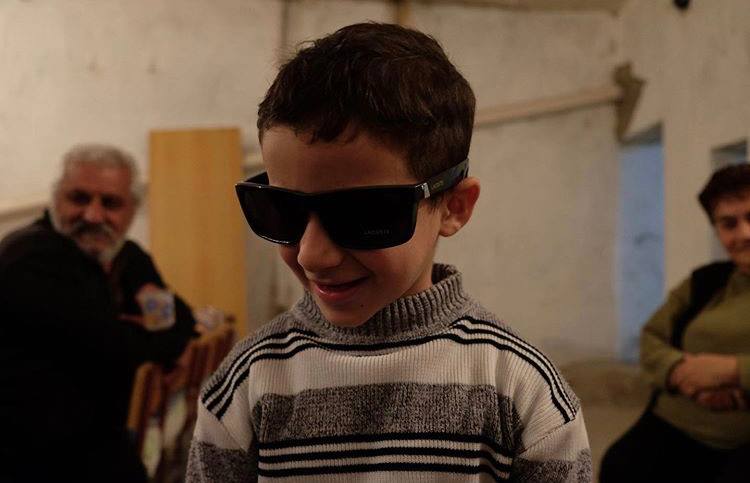 Edward hands them back to me, but I let him know they are for him to keep. I look over at his sister Mary. She’s still staring, but I think I catch her nod ever so slightly. I think I showed her something.

As we leave, without my sunglasses, I hug them all goodbye. I stick my hand out to Edward and he slaps it hard. Kid got cool fast.

And to come clean, those sunglasses never hid my tears. I bought them last week in Yerevan.

And don’t let the United Nations fool you. These kids and the tens of thousands of others, around the world, are all refugees. Seek out an organization you trust and help them out.

A Glendale Doctor on the Karabakh Front

In a Bombed-Out Church, Karabakh Soldier Leaves the Battlefield to Marry Sweetheart