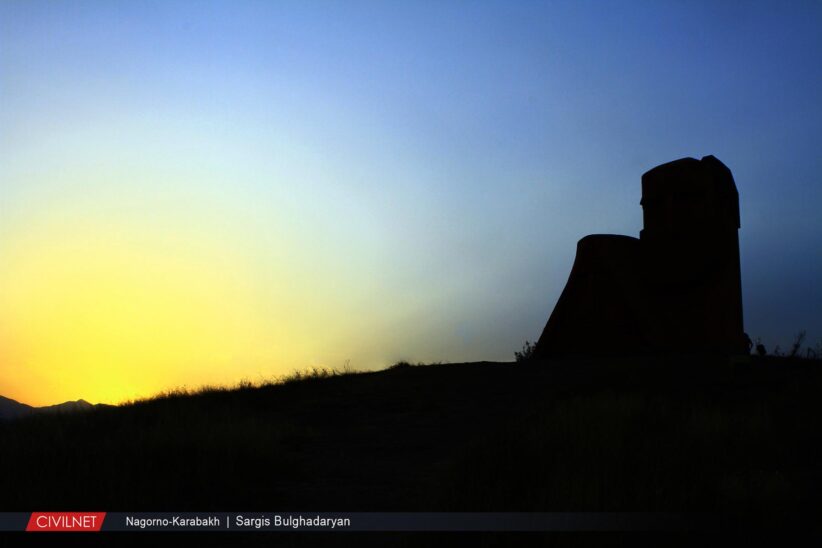 “We are our mountains” is the name of a 1967 monument situated atop a hill outside Stepanakert, shaped from the earth-toned volcanic rock unique to the surrounding region, called tuff, and depicting two heads, neck deep in the earth, peering over the terrain. It is meant to symbolize the deep roots of the Armenian people within this territory, their embeddedness within a landscape. Our connection to this land, to its soil, and these mountains, however, runs much deeper than symbolism.

Seen through the maps of the world’s earliest geographers (Herodotus 5th c. BCE, Dicaearchus 4th c. BCE, Eratosthenes 3rd c. BCE, Strabo 1st c. BCE, Pliny the Elder 1st c. CE, Ptolemy 2nd c. CE), and extending to surveys from the Middle Ages, the Late Medieval period, and to more recent cartography, Armenians have belonged to a fairly consistent geography throughout millennia whose contours and borders have been drawn and redrawn by a countless array of imperialistically-inclined outside powers. These systematic attempts to uproot our population from lands to which we are indigenous has caused deep, collective trauma and a lasting sentiment of longing (կարոտ – karot), common to all of us no matter where we’ve eventually landed.

We are our mountains. Our very identity has been shaped by and derived from a longstanding and lived relationship with a very particular landscape. My displaced and dispossessed ancestors – who I can only trace back to my great-grandparents as they were orphaned from systematic practices of erasure – named their children after landscapes to which they once belonged. My great-grandmother Garan, after the (գարի – gari) – barley field where her mother hid her while fleeing the Ottoman army of exterminators of the Armenian, Greek and Assyrian people in 1915; her son Arnos, after Mount Arnos in present day Turkey; my mother Karine after the town of Karin from which my great-grandfather Samson was expunged.

These are the lands that my people have tended, shaped and cared for for millennia; on which they have built structures of shelter and worship; from which they have eaten and to which they have returned the bodies of their loved ones after they’ve died. For them, it is more than just a territory. It is their identity.

It is also part of their physiology. Through generations of toil, love, and celebration on this land, Armenians have integrated the very substance of the earth into their bodies. The rich diversity of microbiota in the soil inscribes itself into our intestinal register – as the majority of DNA in our bodies belongs to these microbial entities that have taken up residence in our interiors. That microbiome regulates our immune system, produces essential vitamins, and is crucial to human development. The soil of this land constructs us.

The soil is also an active, living archive bearing witness to the physical labor of my people – their bodies, bones, sweat and tears have been deposited in the soil and sedimented in the landscape – as have the layers of violence that both this land and its people have endured. The soil of this land constructs us and we have constructed it – we are stratified in its profiles.

The imperialist ideology that has resulted in the fragmented bounds of our current geography is also the same system of power (along with advanced capitalism) that is now rendering the world mute as the entangled, autocratic Azeri-Turkish regimes, who have much to gain in territory and capital from this invasion, drop banned chemical munition of white phosphorus onto the mountains from above, obliterating the land and its multi-millennial material record. Armenians have the basic human right to live out their relational responsibilities to this land and this territory – a multidimensional relationship that is both ontological and intrinsic. Those who remain silent, do so out of fear of confronting their own colonial legacies.

How long will you stay silent, world?