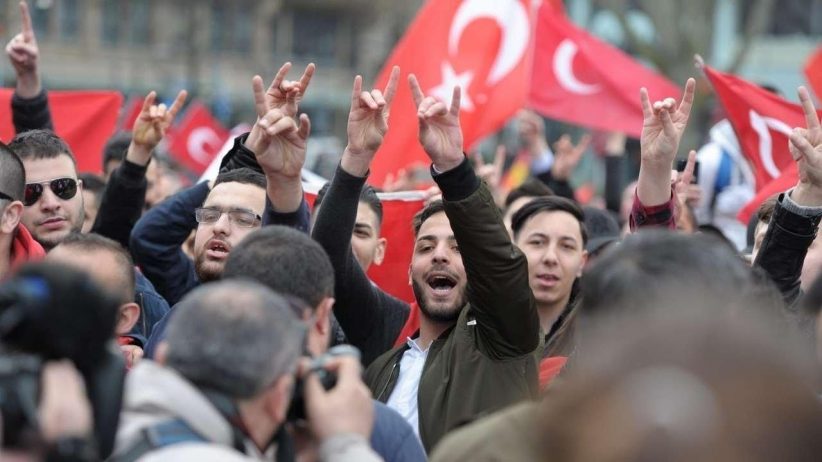 The dissolution of the Grey Wolves will be put to the French cabinet on Wednesday, Minister of the Interior Gerald Darmanin told a parliamentary committee.

His announcement came after an Armenian Genocide memorial outside Lyon was defaced on Sunday with pro-Turkish slogans including “Grey Wolves” and “RTE” in reference to Turkish President Recep Tayyip Erdogan.

On the evening of October 25, footage of the Grey Wolves marches was circulated on social media with the Turkish Flag and wolf emojis, referring the Turkish name of the organization, Bozkurtlar.

During the march, the members of the ultranationalist group chanted threats against Armenians in the neighborhoods of Vienne and Décines-Charpieu, both near Lyon. The group yelled threats like “We are going to kill the Armenians”, the mayor of Décines-Charpieu, Laurence Fautra, said in a statement.

The Independent reported that a man in another video can be heard shouting: “Where are you Armenians? Where are you? We are here… sons of b*****s”, in French.

The following day, the International League Against Racism and Anti-Semitism (LICRA) and CCAF, the Coordination Council of Armenian Organisations in France, both called for the Grey Wolves to be banned.

“French people of Armenian origin must be able to live in France in safety, without being targeted by acts of violence and racial hatred,” the CCAF said in a statement.

The Grey Wolves have been banned in Austria since 2019, while left-wing parties called for the group to be banned in Germany in 2018.

The group has had a long association inside Turkey with the Nationalist Movement Party (MHP), which is currently part of Turkish President Recep Tyaip Erdoğan’s political coalition. It was established in the 1960s by MHP founder Alparslan Türkeş.