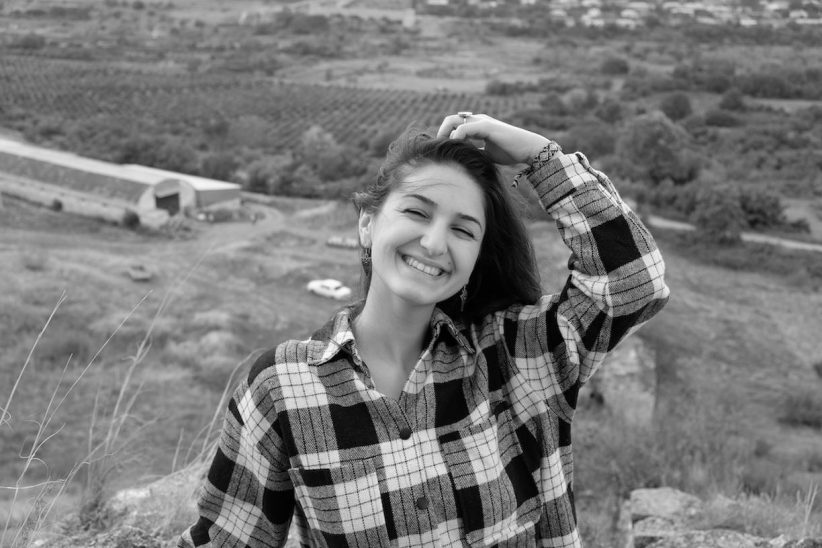 I spoke with a friend a few days ago. She asked me if I had ever written a diary. I thought for a while, and realized I hadn’t. I remember that once I asked my grandmother to buy me a diary, there was such a beautiful pink notebook (it was a luxury in the 2000s). I tried to write, but after two sentences it got boring. Once I heard in a movie that happy people don’t have time to write diaries, they are too busy living life. I always believed in this, living life to the fullest. The saddest thing about this is that if I’m not bored with writing a diary any longer, it means I am not happy, to some extent. Well, but who is happy now? In times like these… So this diary has become my friend in these difficult days.

Today, I found a grey hair on my head. In the last five years, I regularly wanted to dye it red, but never dared. There was a day I decided to do it, but they refused me in the beauty salon, saying my hair is so natural, why? “You have no  grey hair. No, I won’t do it, if you want, go to another place.” So, I left it that way, and deep down I was even a little proud – “oh, I don’t have grey hair!” Well, today life has decided that I must have at least one grey hair. They say that hair turns grey when a person becomes wise, or when worries about someone.

I think I matured on September 27, 2020: at the time of the bombing, when we went down to the first floor of our building. Or maybe when I saw my little sister trembling with fear (literally trembling). Or maybe when my brother went to the frontline? I don’t know at what exact moment, but I know for sure – during this war.

From now on, the fish are my responsibility again. I’m not complaining, I really love them. I’ve had fish before, but they died a month later. It was very sad. And today again, I said goodbye to their owner. Now, we are again waiting for him.

I hate the word “wait” as well as the process itself. It’s a ridiculous  phenomenon when you are powerless, and the only thing given is inaction. How can the disobedient soul of an Armenian woman follow this? It cuts like а blade of a not very sharp knife. And all we have to do is wait: for a brother, for a friend, for a meeting of ministers, presidents, and then for their statements. And then – to guess the veracity of those statements. Well, and of course, wait for the end of the war. We are doomed to wait, alas, there is nothing else we can do.

But during this waiting it is still possible to do some little things.

Today, I visited some of Stepanakert’s residents in one of the shelters. And there were some children there. To be honest, I missed children’s voices in the city so much. I thought all of them had gone. But here they are, they live in their city and are not going anywhere. I talked to them. Their mother said when a car came to take them to Yerevan, the children started crying and did not want to go anywhere. They said, “Mom, please, let us stay here! We know you are afraid for us, but this is our home, how can we leave it?” And they stayed. They cannot go outside to play, they cannot see their friends, their father, but most of all they miss their school. For me this is one of the worst aspects of this war, that children are deprived of the chance to learn. Can you imagine? In the 21st century, children are deprived of the right to learn. How will the world live with this…

I’ll end today’s post with a story about the last war. Once a boy was reading a book under the light of a candle (First Artsakh war, 1988-1994). His neighbor asked, “Hey boy, what are you doing? There is a war going on.” And the boy replied, “What do you mean? Do you want me to remain ignorant because of the war? No, I don’t think so!”

I think people like him were and are the basis of everything good and kind that surrounds us.