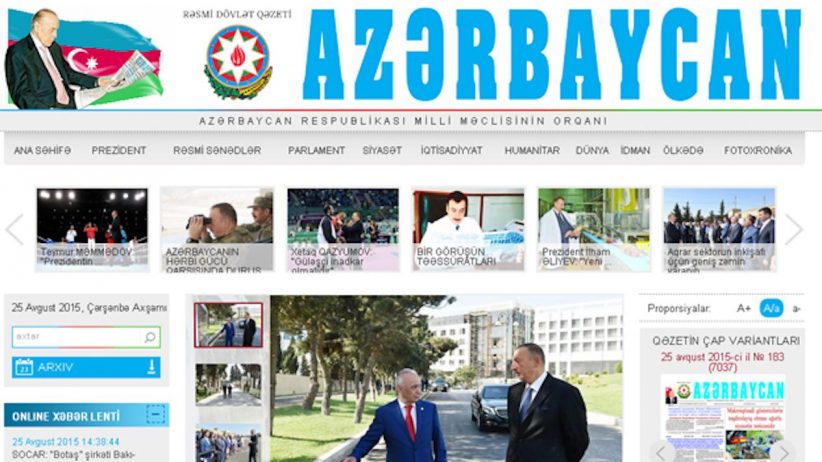 The October 17 ceasefire in Karabakh was depicted in Azerbaijani media as a gesture of “goodwill” in response to Armenian pleas. Following internal criticism after announcing the October 10 ceasefire, this time around, Azerbaijan’s pro-government press attempted to reduce oppositional voices by alleging that the Armenian side is attempting to establish contact with President Ilham Aliyev through any means possible.

With these tactics, Azerbaijan aims to reduce criticism from opposition groups regarding the humanitarian ceasefire, and to show them that official Baku, just like before, is still resolute in its actions in Karabakh. Shortly after the announcement of the October 17 ceasefire, spokeswoman for Azerbaijan’s Foreign Affairs Minister Leyla Abdullayeva told CNN Turk that the new humanitarian ceasefire does not mean the end of hostilities.

Azerbaijan’s officials and pro-government media continue to present the events on the frontline exclusively in a triumphant light, and they continue to convince its population that Armenia violated the October 10 Moscow ceasefire, which they insist is consistent with Armenia’s previous actions. The pro-government Azerbaycan24 news agency published an article claiming that on May 7, 1992, one day after the leaders of Armenia, Azerbaijan, and Iran met in Iran to negotiate a ceasefire, Armenian forces captured Shushi and by doing so, violated the agreement.

Azerbaijan’s political opposition continues to criticize the country’s foreign policies. Despite severe media restrictions inside Azerbaijan, information from various Facebook pages suggest that the country’s opposing party wishes to replace the country’s Foreign Minister Jayun Bayramov with Tural Abbasilin, the leader of the opposition White Party. On October 15, information surfaced about the death of Abbassi’s brother in the war.

On October 18, Ali Karimli, the leader of Azerbaijan’s oppositional People’s Front Party (also known as People’s Front Party) wrote on his official Facebook page that it has been roughly six months since his and his wife’s phones and internet access have been blocked. Karimli warned that the political motives for blocking communications are a huge mistake on part of the leadership. In yet another Facebook post by Karimli, the Azerbaijiani opposition figure expressed his admiration for the people of Belarus. Posting a video of a rally, Karimli stated that the crackdown could not stop the country’s citizens, adding that freedom overcomes fear.

In addition to political groups, Azerbaijani leadership is also facing opposition from minority groups inside the country, such as the Talysh community.

The Facebook page of one of the Talysh politicians living in Russia notes that the head of the Azerbaijani community in Moscow Aghadadash Karimov recently visited him. The Talysh people of Azerbaijan have repeatedly complained that the Azerbaijani leadership is deliberately sending the country’s minorities—especially the Talysh—to the frontlines, thus distorting the demographic image of the Talysh in Azerbaijan. Karimov’s visit is perhaps an attempt to settle existing problems with the Talysh community by propagating unity.

Turkish President Recep Tayyip Erdogan delivered a speech in the Kurdish town of Shernak on Oct. 18, in which not only he expressed his dissatisfaction with the OSCE Minsk Group co-chairs’ work but he also openly criticized Russia, France, and the US for allegedly providing weapons to Armenia. With this, Erdogan is again attempting to show that Turkey’s support to Azerbaijan is more than legitimate.

Erdogan’s statement is in line with Aliyev’s October 17 message, in which the latter expressed his surprise at the abundance of ammunition in Armenia, suggesting that Armenia has received assistance from other countries.

There are also attempts to create a joint Azerbaijani-Turkish information platform to facilitate communication between the two countries, which has been actively discussed in Azerbaijan since early September of this year. On October 15, Azerbaijani Presidential Aide Hikmet Hajiyev tweeted a telephone conversation between President Aliyev, President Erdoğan, and Fahrettin Altun, Turkey’s Chief of Staff for Public Relations. During their discussions, all parties praised the initiative for a unified information center and noted that a propaganda attack is being carried out against Azerbaijan and Turkey.

The public health situation in Azerbaijan continues to destabilize as COVID-19  cases rise in the country. Education institutions have been ordered to close until November 2. The Baku metro system has also been shut down.