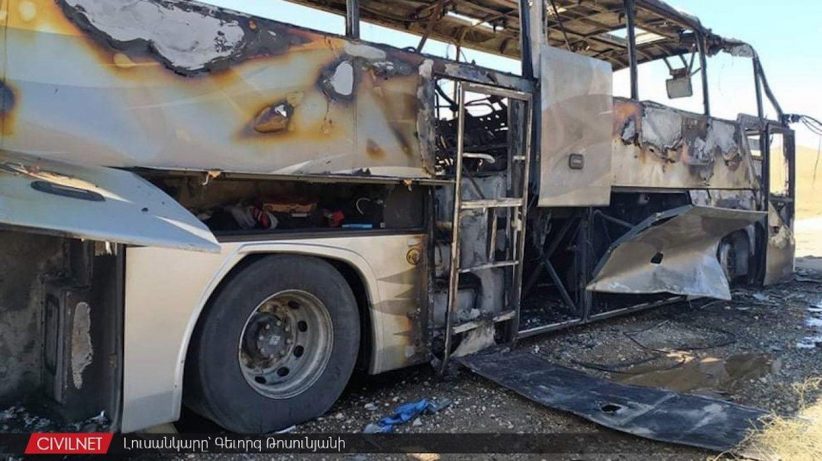 Fighting along the Line of Contact – between the territories under Karabakh’s control, and Azerbaijan – continued for a third straight day Tuesday, with clashes spreading to the border between Armenia and Azerbaijan.

The Karabakh Defense Ministry reported over 80 deaths and hundreds wounded.

On the morning of Sept. 29, a civilian bus was fired at by an Azerbaijani drone in the eastern Armenian town of Vardenis. The bus was destroyed in the attack but no casualties occurred.

Armenia’s Ministry of Defense reported that Azerbaijani forces were firing at the town of Vardenis and the military units stationed there.

Further intensifying the situation, an F-16 fighter jet from the Turkish Air Force took off from the Ganja airbase in Azerbaijan and shot down an Armenia Su-25 jet, according to Armenia’s Ministry of Defense.

The prime minister’s office released a list of Azerbaijani military units destroyed by Armenian forces, which include 80 armored vehicles, 49 drones, four helicopters, and one fighter jet.

Turkey’s involvement in the fighting has become more clear in recent days. The Guardian reported that Syrian Jihadists transported by Turkey from northern Syria to Azerbaijan are heading to the frontline.

Additionally, there were reports that Georgia was denying Russia its territory to use for transporting weapons to Armenia. Later it was reported that the Russian weapons were entering Armenia through its border with Iran, an allegation Iran has denied.

The United Nations Security Council is expected to hold closed-door consultations about the conflict on Tuesday. The OSCE Permanent Council also planned to hold an extraordinary session, said Edi Rama, chairperson-in-office and prime minister of Albania.

Vice President of the European Parliament, Fabio Massimo Castaldo, has called on the European Union to condemn Azerbaijani aggression, making him the most senior EU official to condemn Baku.