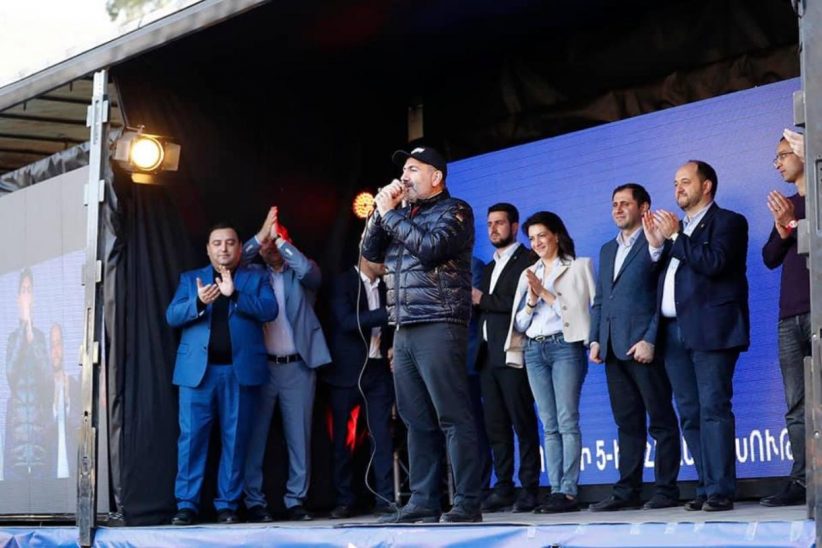 On March 10, Armenian Prime Minister Nikol Pashinyan announced he would take a break from his official duties to hold rallies across the country ahead of the constitutional referendum slated for April 5. The same day, Pashinyan, who is supporting the “yes” campaign in favor of the referendum’s passage, began his tour in Armenia’s southernmost region, Syunik.

In his rallies, Pashinyan has repeatedly excoriated the country’s Constitutional Court, a majority of whose judges would be dismissed if the referendum passes. In one speech, for instance, Pashinyan claimed that the Constitutional Court “does not represent the people” and labeled it “the only remaining institution in Armenia that is not in compliance with the current constitution”. In another speech, Pashinyan urged high voter turnout, going so far as to say that “there is no force in the world that can challenge the decision of Armenia’s sovereign citizens”.

However, Pashinyan’s campaign has already encountered its fair share of difficulties. Most recently, a video went viral on Armenian social networks that showed Pashinyan scolding a man in the village of Kurtan in northern Armenia for approaching him with a request to help him improve his family’s living conditions. In the video, Pashinyan advised the man, named Mekhak Arakelyan, to find work himself and said that the government is not obligated to help with such issues. Unbeknownst to Pashinyan at the time, Arakelyan is unable to work due to serious health problems. Though Pashinyan later issued an apology, the video continued to generate much discussion online.

In a second faux pas for the “yes” campaign, another incident was caught on video, during which a young woman on the Yerevan metro ripped up a booklet supporting the “yes” campaign and threw it at Pashinyan. Though Pashinyan’s reaction was much more balanced—he replied “we respect your opinion, that is what democracy is for”—the video’s widespread circulation online has, nonetheless, distracted from Pashinyan’s get-out-the-vote message.

Pashinyan later addressed the incident by sharing the video himself on his Facebook page in an attempt to spin it in a positive light for the “yes” campaign. In his commentary, Pashinyan connected the young woman’s open and direct criticism of him with Armenia’s increasing political openness and democratization, noting that the young woman “will continue to live her normal life and freely express her point of view…because she lives and will live in a free and happy Armenia”.

Meanwhile, the “no” campaign has been critical of Pashinyan’s conduct, particularly his use of state resources at his rallies. For instance, Ruben Melikyan, a former deputy Minister of Justice and the leader of the “no campaign”, chided Pashinyan for traveling to Syunik region to begin his rallies onboard a helicopter that belongs to the prime minister’s office, even though Pashinyan is campaigning as a private citizen, not in an official capacity.

Aside from holding campaign rallies, Pashinyan also posted a “Declaration on the Referendum” on his Facebook page, laying out six points justifying his support of the referendum. The text broadly addresses two topics. First, it claims that elections prior to the 2018 Velvet Revolution did not express the free will of the people and that, moving forward, the electoral system must ensure free expression of the people’s will. Second, it criticizes the corrupt system that developed before 2018, in which political and economic interests became intertwined, and under which the judiciary regularly put the interests of the elite above state and national interests.

The constitutional referendum scheduled for next month was called as a result of a bill passed by Armenia’s National Assembly on February 6. The referendum proposes to eliminate a grandfather clause in the country’s constitution allowing Constitutional Court judges appointed before April 2018, when a 12-year term limit was implemented, to serve beyond that limit. If approved, the referendum would result in the removal of seven of the Constitutional Court’s nine judges, including chairman Hrayr Tovmasyan.

For several months now, Tovmasyan has been engaged in a bitter feud with the current administration led by Pashinyan. The dispute centers around widespread perceptions that Tovmasyan is politically biased in favor of the authorities who dominated the country prior to 2018. The National Assembly’s decision to call the referendum represented a significant escalation in tensions between the current government and the court head.

In accordance with amendment procedures in Armenia, the referendum will pass only if the total number of votes in favor represents more than both 25 percent of the country’s eligible voters and 50 percent of the voters who choose to participate in the referendum. That figure is roughly 650,000 people.

Obstacles to and Prospects for Repatriation: A Talk with Diaspora Commissioner Zareh Sinanyan