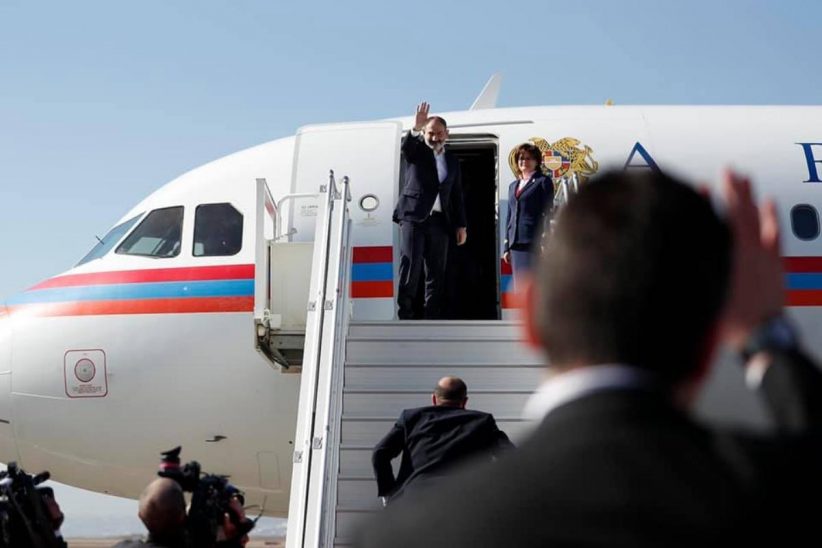 Pashinyan also held meetings with Catholicos-Patriarch of All Georgia Ilia II, the head of the Georgian Orthodox Church, and representatives of Georgia’s Armenian communities in Tbilisi and Samtskhe-Javakheti, a Georgian region with a predominantly Armenian population.

Pashinyan has regularly called the relationship with Georgia a “key foreign policy priority for Armenia” since coming to power in 2018. Indeed, Pashinyan’s first official trip abroad was to Georgia, a clear message of his administration’s desire to expand Armenian-Georgian ties.

During his visit, the Armenian leader repeatedly emphasized the two countries’ interconnected histories, saying, for instance, that “our peoples are bound by deep-rooted cultural, political, and historical ties” and “have lived side by side for thousands of years”. In particular, Pashinyan underlined the two countries’ shared Christian heritage. In the 300s, Armenia and Georgia were among the first countries in the world to officially adopt Christianity.

Pashinyan also pointed to the significant contributions made by Tbilisi’s once-thriving Armenian community to the city’s cultural, economic, and political development. Many of Armenia’s most revered cultural figures, including Komitas, Sergei Parajanov, Sayat-Nova, and Hovhannes Tumanyan, spent significant portions of their lives in the Georgian capital.

The Armenian leader then moved on to issues of geopolitics, stating that Armenia’s relationship with Georgia is underpinned not only by the historical ties detailed above, but also by a “common vision for the future based on democratic values”. According to Pashinyan, “the atmosphere between the two countries is exceptionally good, and bilateral relations have never been better than [they are] now”.

Armenian-Georgian relations have long been strained by the countries’ sorting into opposing geopolitical, security, and economic camps following the collapse of the Soviet Union in 1991. Since that time, Georgia has cultivated close economic relations with Azerbaijan and Turkey, two of Armenia’s biggest rivals on the international stage, as well as with the EU and U.S. Meanwhile, Armenia’s maintenance of a close security relationship with Russia provokes anxiety in Georgia, which, along with its Western allies, has deeply hostile relations with its vast neighbor to the north.

The development of closer ties between Armenia and Georgia has also been hindered by the deeply unequal relationship between the two neighbors, with the Armenian economy heavily dependent on Georgia’s continued cooperation. Due to Azerbaijan’s and Turkey’s ongoing blockades of Armenia, the Armenian-Georgian border has become Armenia’s sole land connection with Europe and an economic lifeline for the small, landlocked country. The overwhelming majority of Armenia’s imports transits overland through Georgia.

In light of Armenia and Georgia’s conflicting foreign policy trajectories, much of Pashinyan’s discussions with Georgia’s political elites focused on efforts to compartmentalize Armenian-Georgian relations and not allow third parties to influence the development of ties between the two countries. For instance, when Georgian Prime Minister Gakharia underlined his country’s commitment to acceding to the EU and NATO, Pashinyan confirmed that Armenia would “respect Georgia’s drive for Euro-Atlantic integration”, regardless of his country’s membership in the Russian-led Eurasian Economic Union.

Toward a “Common View on Security”

According to Pashinyan, the two countries “have a common view on security”, even though they “have different views on security systems”. To that end, the Armenian leader emphasized that “Armenia cannot be a threat to Georgia’s security, and Georgia cannot be a threat to Armenia’s security”. Likewise, Gakharia confirmed that, despite differences in “the foreign orientation of the countries, it is impossible to have any misunderstandings” and pledged to “continue cooperation in a good-neighborly manner”.

In an interview with CivilNet, Tbilisi-based journalist Norayr Gasparyan noted that the enthusiasm with which Pashinyan was welcomed in the Georgian capital stood in stark contrast with the treatment received by his predecessors. Likewise, the Georgian media’s widespread coverage of Pashinyan’s visit was unprecedented. According to Gasparyan, these developments reflect a significant improvement in Armenia’s perception among the Georgian public following Armenia’s 2018 Velvet Revolution, which swept Pashinyan into power and heralded an ongoing process of democratization in the country.

Nevertheless, it remains to be seen whether the two countries will be able to capitalize on the dramatic changes Pashinyan has introduced to Armenia’s political landscape and meaningfully improve relations, or if, instead, their contrasting foreign policy directions will continue to hinder the development of strong bilateral ties.

Lives and Struggles Through the Lens